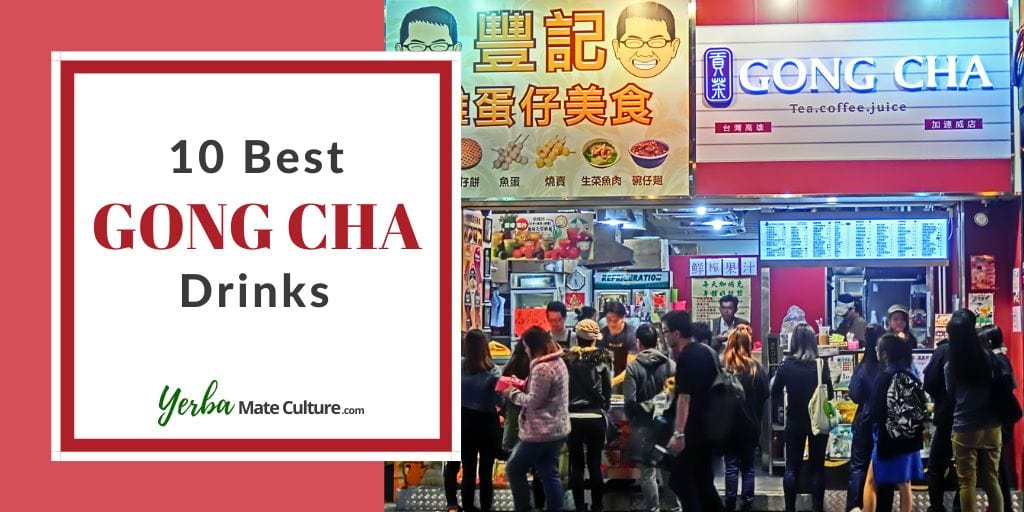 If you’re ready for a new kind of refreshment, Gong Cha has what you crave.

A Taiwanese tea shop with over 1600 stores in 20 countries, these masters of bubble tea are now thrilling US customers with their inspired beverages.

Premium ingredients, creativity, and a commitment to consistency have made them an international success story. Bubble tea isn’t new, but Gong Cha’s elevated it into an art form!

In this guide, I will introduce the top 10 best Gong Cha drinks from boba milk tea and healthy hibiscus green tea to some other delicious options you can’t even imagine.

Why Is Gong Cha So Popular?

Gong Cha is the disputable leader in fusion beverages. To understand why, let’s start at the top.

Gong Cha’s first store opened in Kaohsiung, Taiwan, in 2006. In a saturated market, its success was both unexpected and unprecedented.

Just three years later, they opened their first international cafe in Hong Kong, and by 2012, they took South Korea by storm. By 2018, they boasted more than 1500 stores worldwide, from Canada to Singapore.

Along the way, Gong Cha developed their products to include flavor sensations that you won’t find anywhere else.

So what makes their drinks so special?

The name Gong Cha refers to tribute tea for an emperor. A nod to their quality, their tea, coffee, and smoothies are fit for royalty.

Branded in “series”, you can customize a tea, coffee, or milk base with a list of distinctive toppings from their beloved milk foam and signature black pearls to Oreo crumbs and Coconut Jelly. It’s food for the soul.

Gong Cha’s first US store opened in Fremont, California, in 2013. Today, the company is poised for rapid expansion across the US, growing from a few units on the West Coast to more than 150 across 11 states, including California, Texas, and New York.

The brand, according to analysts, appeals to America’s diverse demographics. Second only to the Asia-Pacific region, US market share is growing exponentially.

You have a lot to look forward to!

These ten drinks, from milk teas to slush and coffee, will give you a good feel of what to expect and how to customize your order to perfection.

Pearl Milk Tea is a traditional bubble tea blended from milk and your choice of fruit flavorings. Topped with black tapioca pearls, it’s balanced and refreshing, both hot and iced.

A hearty selection, it’s not for calorie counters at 335-430 per cup. Why not share one with a friend?

Gong Cha’s Brown Sugar Milk tea will satisfy any sweet tooth. A blend of tea and milk infused with brown sugar, it has a milkshake-like quality.

This drink won’t win any nutrition awards, but it’ll make a bad day better. Ask for the +Coffee version for a kick of caffeine.

Simplicity is the key to this comforting tea.

A blend of oolong and Gong Cha’s legendary milk foam, it’s an easygoing tea free from the bitterness in some blends.

Look no further than this Earl Grey Milk Tea. Stacked with black pearls, pudding, and herbal jelly, you’ll need a straw and a spoon.

Strawberry Milk Tea is a summer delight. Bright and fragrant, it tastes like strawberries and cream.

Try it with White Pearls or chewy basil seeds for an herbal twist.

Matcha Latte’s are so popular that you can get them anywhere from Dunkin’ Donuts to Starbucks.

Gong Cha’s Matcha Tea Latte has all the flavor of premium matcha but with less bitterness. Strong yet smooth, the health benefits alone justify the splurge.

Make things interesting with a White Pearl or Aloe topping.

Beat the heat with Wintermelon Milk Tea. A light, calorie-conscious choice, it’s sweet and fruity with a dessert-like caramel flavor.

Nuanced, we like it plain or with pearls — White Pearls add a mere 28 calories.

Hibiscus green tea is a nutritional powerhouse with the benefits of green tea and antioxidant-packed hibiscus. Light on calories but big on fruit flavor, it’s spectacular iced.

A basil seed topping adds a welcomed hint of bitterness.

A blend of fresh-brewed tea, ice, and syrup, the Caramel Chocolate slush is a dairy-free take on the traditional milk smoothie. If you like ice cream, you’ll love the icy consistency and dessert-like feel.

Toning the sugar down to 50% only makes it better.

Just right for the morning, noon or night, it’s less rocket fuel than an anytime coffee with a robust flavor and a gentle bite.

How to Order at Gong Cha

Order in person or online in five easy steps:

Drinks in each series are built on different flavors and textures. Freshly brewed, choose your favorite from Gong Cha’s extensive menu.

Gong Cha offers its drinks in medium (16 oz) and large (22) sizes. Both are generous and consistent with customers’ expectations.

You get exactly what you pay for — there are no unpleasant surprises.

Most of Gong Cha’s teas are available hot or iced, except for smoothies and slushes. Take your pick.

Choose one of five ice levels between 0% and 100% to fine-tune the temperature of your drink. Going light preserves the flavor on long commutes — no more watery drinks!

All Gong Cha beverages except those with honey can be made sugar-free. We recommend starting at the 50% mark.

Gong Cha offers a range of exciting toppings that you can mix and match to refine the taste and texture of your drink.

The selections are always evolving!

If you want the same-old bubble tea, there’s no shortage of options.

But why settle for the usual when you can have the new and creative with Gong Cha? It’s bubble tea and more reimagined.

Try one of the delicious options introduced in this guide and you won’t be disappointed!

You can also check out my recommended kung fu tea drinks for more premium choices.