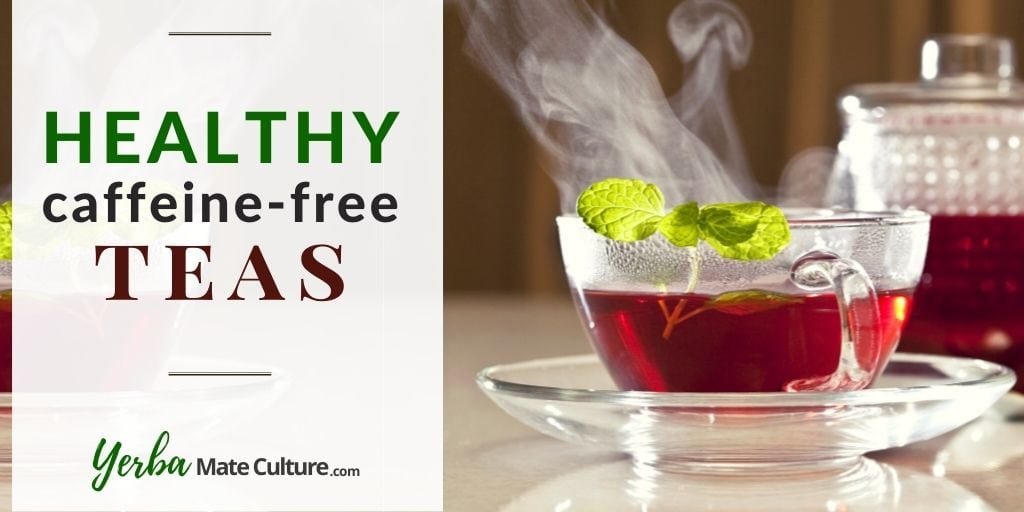 Drinking a cup of tea or coffee is a popular way to get an energy boost in the morning or in the middle of a tiring workday. But what if you want to drink a cup before going to bed?

Relaxing tea without caffeine would be nice. Right?

So why not go for some healthy herbal tea. Most of them are naturally caffeine-free and provide many benefits.

Some might say that herbal teas aren’t tea at all because “real tea” is made with the plant called Camellia Sinensis. Yes, they are actually infusions of herbs and spices created from any edible plant — so you can call them herbal tisanes instead.

But whichever you want to call them, there are endless varieties that pack a punch of nutrition without causing the jitters or disturbing your sleep. Grow your own or buy them bagged, they’re a soothing way to harness the satisfying flavors and medicinal value of herbs.

Now, let’s take a look at some of the best caffeine-free teas that are as refreshing as they are healthy.

Here is a summary of my favorite caffeine-free herbal teas:

While caffeine is a great energy booster, it also has some unwanted side effects.

Won’t Ruin Your Sleep: Caffeine is a psychoactive compound. It blocks the production of sleep-promoting chemicals in the brain. One cup of black coffee, or even black tea, before bedtime can delay sleep by an hour or more and disrupt your circadian rhythm.

Doesn’t Make You Jittery: If you’re sensitive to caffeine, any amount can make you jittery — it’s like rocket fuel. Why risk it when herbal tea is a delicious and equally invigorating alternative?

Won’t Raise Your Blood Pressure: According to the Mayo Clinic, a single 8-ounce serving of black or green tea may raise your systolic blood sugar up to 14 points. The effect is fleeting, but who can stop at one cup? Herbal tea is a better choice if you have hypertension.

Naturally Caffeine-Free: Most decaffeinated tea is chemically processed to remove caffeine. But herbal teas are naturally caffeine-free and contain no unwanted substances.

Ginger tea is made with steeping fresh or dried ginger root in hot water. Alone, it has an earthy taste with a hint of citrus and a kick of spice.

The amount of ginger used and whether it’s sliced or grated determines how mild or pungent the brew is — grate or grind it for more impact. Add a touch of honey for sweetness or complementary herbs, such as mint, to give each cup a unique flavor profile. The aroma will remind you of holiday gingerbread.

An ancient remedy used for its many health benefits, drinking ginger tea is a delicious way to tame inflammation, reduce nausea and even turn back time. Research suggests it also has powerful anti-aging effects.

If you are looking for some buying tips, check out our guide with the best ginger teas on the market!

Rooibos is a silvery South African shrub growing mostly in the Cederberg mountains near Cape Town. The indigenous people have been using it to make herbal remedies for centuries.

Fragrant, its sweet, delicate aroma belies a strong nutty flavor with notes of wood. An acquired taste, a dash of sweetener, or a slice of lemon or orange helps it taste more familiar. Try it as a latte with a sprinkle of cinnamon for a bedtime treat.

There is also green rooibos tea, which is made with unfermented leaves. Its flavor is milder and more grassy compared to red rooibos tea.

Little research has been done on the health benefits of Rooibos. It’s a relative newcomer to the tea world.

But it’s known to contain high doses of polyphenols — potent chemical compounds with anti-inflammatory and anti-aging properties. A cup a day may reduce hypertension and control the symptoms of hay fever.

Want to try some? I recommend ordering this Organic Rooibos Tea from the Buddha Teas Online Store.

Chamomile comes from daisy-like plants in the Asteraceae family. Made with dried flowers, this tea has a honey-like aroma and a mild floral flavor.

Cultivated primarily in Egypt and Eastern Europe, it also grows wild in most climates.

Thought to have calming properties, Chamomile tea is an excellent relaxing and non-alcoholic nightcap before bed.

One great thing is that chamomile tea is not acidic, so you don’t have to worry about getting heartburn after drinking it.

Hibiscus tea is sourced from the same tropical flowers that decorate your home. But of the hundreds of colorful species, only Hibiscus sabdariffa is generally used.

All parts of the plant are edible, but teas are mostly made using the magenta calyces.

Similar to rosehips, the flavor and aroma are overwhelmingly floral and tart but with a fruity, naturally sweet edge.

Human and animal studies show that hibiscus tea can improve heart health. Researchers believe anthocyanins – the antioxidants that give red, purple, and blue plants their vibrant color – are responsible for the effect. A cup three times per day may help lower cholesterol and blood pressure.

Turmeric tea is made with fresh turmeric root or powder. A bright orange spice used in Indian cuisine and an American favorite, bread and butter pickles, it has a dry, peppery taste that’s thankfully less pungent in water.

Combining it with other ingredients like ginger, cinnamon, fruits or milk minimizes the bitterness and makes the most of its flavor nuances.

An unusual taste for the Western palate, turmeric is surging in popularity because of its health benefits. Brimming with B vitamins, potassium, manganese, and zinc, it’s a nutritional powerhouse. It’s been a favorite of Chinese and Ayurvedic medical practitioners for millennia.

The active ingredient, curcumin, acts as an immune modulator, boosting the efficiency of the T cells that help fight infectious diseases.

Studies show that it may be as effective as NSAIDs, like ibuprofen, for the treatment of osteoarthritis. In early research, turmeric also shows promise as a cancer treatment.

Made from the mushroom that grows on birch trees, it has a smooth, slightly sweet flavor with a pleasant hint of bitterness and virtually no mushroom taste. The aroma is barely noticeable.

Chaga mushrooms, that resemble burnt charcoal, must be harvested in the wild and make a rich brown brew. Found exclusively in cold climates, Chaga tea has served as an herbal remedy for generations of people in Siberia.

Valued as a digestive aid, research shows it may prevent the growth of Helicobacter pylori — the bacteria responsible for stomach ulcers. It also contains polyphenols that support the immune system and reduce inflammation.

Peppermint is a leafy green plant from the Lamiaceae family. A cross between spearmint and watermint, it’s a popular culinary herb.

Native to Europe and the Middle East, peppermint is prominent in their cuisine and a common ingredient in candy and gum.

Peppermint tea is made by steeping dried or fresh leaves and has a fresh, minty fragrance but a surprisingly spicy taste. It takes a little sweetener to bring out the traditional mint flavor.

Peppermint is packed with essential oils, including menthol, which gives it its cooling properties. Sipping on a steamy cup can soothe a sore throat and help clear clogged sinuses.

Greek Mountain tea is a single varietal herbal tea made from the dried leaves, flowers, and stems of the Sideritis plant. Also called Shepherd’s Tea, it’s been used as an herbal remedy since the days of Socrates.

Grown in the mountains of Greece, it’s hailed as the “new green tea” for its mild flavor with notes of citrus and mint.

Its light floral scent is barely perceptible. Like green tea, it’s a perfect match for honey or a twist of lemon.

The Sideritis plant contains as many essential oils as peppermint despite its neutral taste. Rich in antioxidants and polyphenols, it’s thought to aid in digestion.

Also known as ironwork, it was used in ancient Greece to heal battle wounds caused by iron weapons. It’s believed to have anti-inflammatory and antiseptic properties.

Which Teas Do Not Have Caffeine?

All “real teas” are made with leaves of Camellia Sinensis, a plant that naturally contains caffeine. So all of them contain caffeine — some more and some less — depending on how the tea is processed and how you brew it.

For example, the amount of caffeine in one cup of black tea is about half compared to a cup of coffee.

Well, of course, there are also decaffeinated teas, that only have a very small amount of caffeine. The caffeine content of decaf tea is only about 2 milligrams per cup on average.

However, plenty of herbs can be used to make delicious teas (or tisanes) that are naturally non-caffeinated. But are all herbal teas caffeine-free?

The answer is, no. So choose carefully.

There are actually more than 60 plants that contain caffeine including yerba mate, guayusa, and guarana.

So if you want to avoid caffeine, use some of our recommended herbal ingredients.

Tea is a timeless pleasure, so splurge on a cup when you need a boost.

But you can enjoy herbal infusions anytime and anywhere without the undesirable effects of caffeine. Let this article, and your imagination, be your guide in choosing the right ingredients.

Read this guide on cinnamon and bay leaf tea benefits and how to make it at home.