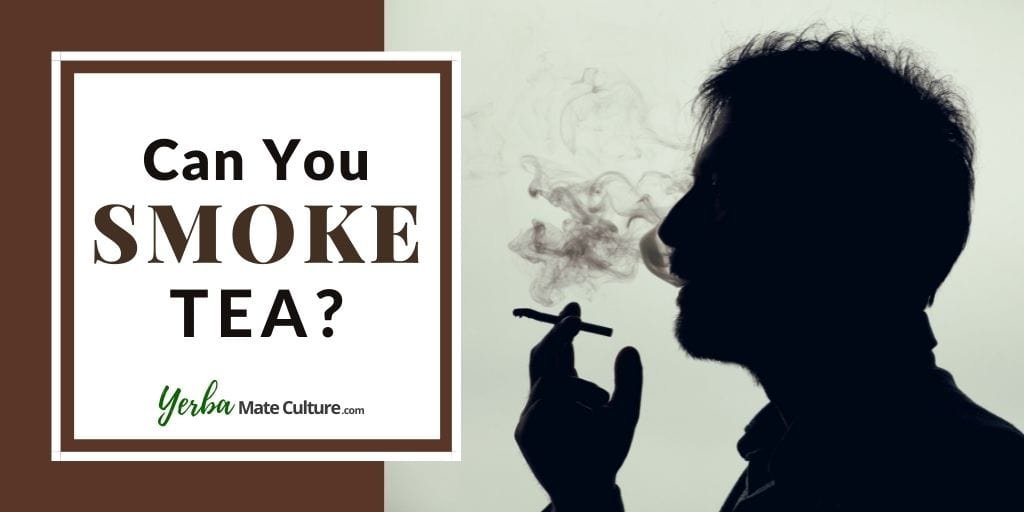 When is first stumbled upon the topic of smoking tea, I thought “this must be a joke!”

Why would anybody want to smoke tea?

That sounds like something that kids would do because they don’t have any cigarettes or weed, but want to experiment with something.

But when you start thinking about it more, it’s not that stupid. Why should we, as humankind, limit ourselves to tobacco and weed, when there are so many other herbs on this earth.

Possible reasons to smoke tea could be for example taste, a pleasant effect, or to use it as a substitute for something more harmful, like cigarettes.

The topic of smoking tea clearly needs further investigation so I decided to do some research. And of course, this would include getting my hands dirty (or lungs in this case) and smoking some myself!

Contents show
1) Is Smoking Tea Really a Thing?
2) What Happens if You Smoke Tea? Do You Get High?
3) What Kind of Teas Can You Smoke?
4) Smoking Green Tea to Stop Cigarettes
5) Smoking Tea FAQ

Is Smoking Tea Really a Thing?

Smoking tea and many other kinds of herbs certainly isn’t a new invention. Humans have indeed experimented with smoking all kinds of plant material for thousands of years. But in the end, we have mostly settled with tobacco and weed.

However, smoking green tea has been relatively common in Vietnam for a long time.

Also, a product called Billy55 was released in the US a few years ago. They look like regular cigarettes but contain only green tea.

So yes, smoking tea is definitely a thing!

But why would anyone want to smoke tea?

Here are some possible reasons for smoking tea:

Hold on a moment! Before you grab your favorite loose leaf tea and start rolling a spliff, let’s take a look at the possible side effects of smoking tea.

Here are a few reasons not to smoke tea:

So the bottom line is that I don’t recommend tea smoking to anyone.

And you don’t even have to. Because next, I will do it, and then I will tell you everything you want to know about it!

What Happens if You Smoke Tea? Do You Get High?

While I’m rolling a tea spliff, let’s take a quick look at the theory.

So what could possibly happen when smoking tea?

The main psychoactive compounds in tea are:

Caffeine: We all know that caffeine gives you an energy boost and increases alertness.

L-Theanine: All teas made with the tea plant (Camellia sinensis) contain L-theanine, which helps with lowering anxiety and may give a boost to focus and memory.

Green tea has a moderate amount of both caffeine and L-theanine. This is why it gives a nice energy boost while having a relaxing effect at the same time — when we drink it.

But do caffeine and L-theanine get absorbed if we smoke green tea instead of drinking it?

It seems like smoking coffee for getting caffeine works, but the effect is not pleasant. So we can assume that the caffeine also gets absorbed when smoking green tea. L-theanine could also be possibly absorbed by smoking as some people have reported a relaxing effect from smoking green tea. However, there is no evidence to support this.

Ok, so now it’s time to get smokin’ and see what happens!

The taste of my green tea spliff was surprisingly mild. It didn’t have much flavor at all and it didn’t feel rough or irritating in the throat or lungs.

There was a mild herb-like taste, which was not bad nor was it particularly pleasant.

After smoking about half of the spliff above, I didn’t really feel anything. That was enough for me so I threw the rest away.

I felt very mild lightheadedness, though. The similar kind you might get from smoking a shisha. This was probably just because of inhaling smoke.

I was expecting that I might cough or feel bad after smoking tea but neither happened.

So all in all smoking green tea was surprisingly pleasant!

Unfortunately, I didn’t take any video material from my experiment.

If you want to see a video of someone smoking tea, check out this funny clip by Ori Bengal:

What Kind of Teas Can You Smoke?

You can basically smoke any kind of tea, although I don’t recommend it.

The “real teas” are made from the leaves of the tea plant and include everything from green and white teas to oolong and black teas. They all contain various amounts of caffeine and L-theanine.

The taste and effect depend largely on what type of tea you smoke and which brand you choose. Black tea and pu-erh tea have the highest amount of caffeine while green tea has the most L-theanine.

Although, you might not feel much anything when smoking tea (at least I didn’t).

Then there are also herbal tea cigarettes available. In general, they don’t contain any nicotine, caffeine, or L-theanine so the effect is probably different from smoking cigarettes or tea. Some might have a pleasant taste and contain relaxing substances that get absorbed when smoking.

However, I don’t recommend smoking any herbal cigarettes since you will be ingesting carbon monoxide and many other harmful compounds.

The Billy55 green tea cigarettes were developed by an acupuncturist named Ranko Tutulugdzija. He says he developed them to help people who want to quit smoking cigarettes.

He claims that it makes sense to switch from cigarettes to smoking green tea so that you can get rid of the nicotine addiction. Then you only have the habit of smoking, and you can eventually get rid of that as well.

Here is a short video from Billy55 that introduces the product:

While I think it might work for some people, there are also some problems with this logic.

If you quit smoking cigarettes cold turkey and start smoking the Billy55 sticks, you will get nicotine withdrawals. That’s why people often use nicotine gum, patches, etc. when quitting.

Of course, you can gradually shift from smoking cigarettes to smoking Billy55 sticks.

Still, I’m not sure if switching from smoking one product to another product is the best and safest way to quit.

Can you smoke green tea?

Yes, you can smoke green tea and there are even green tea cigarettes available. However, smoking them is not good for you as you will ingest carbon monoxide and other harmful compounds.

Will smoking green tea get you high?

Smoking green tea doesn’t really get you high but you might feel lightheaded because of the smoke and carbon monoxide. You might also feel the energizing effect of caffeine and the relaxing effect of L-theanine.

Can you smoke black tea?

Smoking black tea doesn’t differ much from smoking green tea. You can do it, but it’s not recommended and not good for your health.

Can you smoke tea leaves?

You can basically smoke any kind of tea leaves but this will expose your lungs to harmful smoke.

Can you smoke tea bags?

You can smoke the contents of tea bags, but not the bags themselves. However, it’s not recommended to smoke tea because it’s harmful to your lungs.

Can you smoke peppermint tea?

Yes, you can smoke peppermint tea.

Smoking mint tea will actually taste quite fresh and pleasant. However, the smoke is still harmful to your lungs.