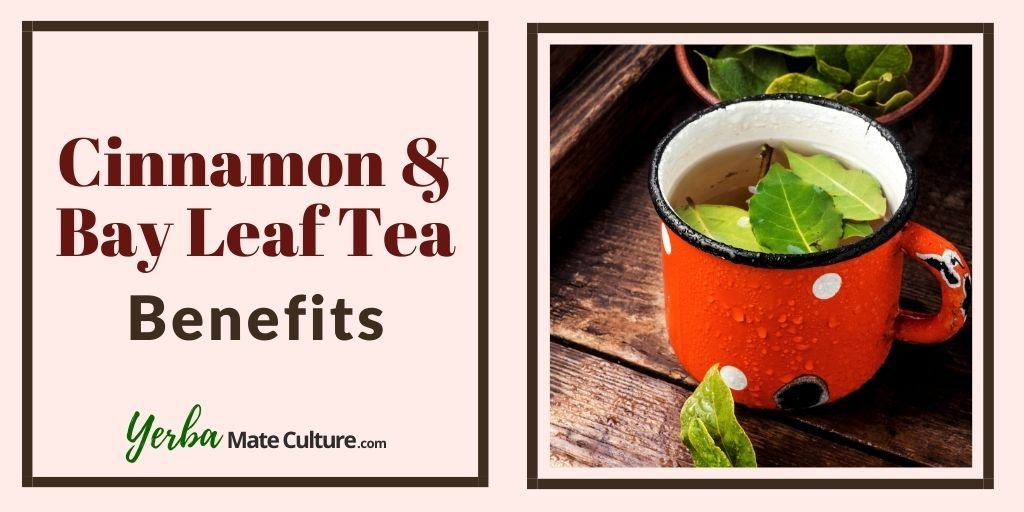 Cinnamon and bay leaf tea isn’t just one of the most delicious drinks in the world. This fragrant, flavorful tea is also packed with health benefits that can help you fight off illness and disease.

Few herbs and spices offer the protection and regenerative benefits like these two powerhouses. In fact, this tea duo can help with everything from brain performance to cancer prevention.

Discover why choosing “tea made with two” is the absolute best thing you can do if you’re looking for one of the healthiest teas to drink in the morning!

So what exactly makes cinnamon and bay leaf such a potent combination for health benefits?

First, it helps to know why both elements are powerful on their own.

Everyone knows cinnamon. This rich spice is commonly used to flavor both sweet and savory dishes. Used medicinally since ancient times in places like Egypt, cinnamon is derived from bark cultivated in Sri Lanka, India, Myanmar, and parts of South America.

It is beloved for its sweet, woody flavor. In addition, cinnamon is considered to be a “super spice” due to the fact that it outranks most other herbs and spices in antioxidant activity.

I recommend that you watch this short video for more information on the healing powers of this ancient herb:

The earthy flavor of cinnamon adds a nice touch to almost any kind of tea — I frequently add some to my own herbal blends.

Bay leaves are fragrant leaves from laurel trees capable of growing in nearly all warm climates. They are used to flavor savory dishes using whole, fresh, dried, or ground options.

The leaves offer a subtle bitterness that is buried by hints of pine, black pepper, and minty flavors. Many people use bay leaves to soothe an upset stomach. What’s more, these leaves are packed with vitamin A, vitamin B6, and vitamin C.

Now, let’s take a closer look at the seven amazing benefits that cinnamon and bay leaf tea can offer us.

Both cinnamon and bay leaves offer potent insulation against diabetes.

Studies show that bay leaves help to naturally improve the glucose and lipid profile of people suffering from type 2 diabetes.

And the results for diabetes management may get even better when you add a dash of cinnamon to the mix!

The benefits associated with cinnamon consumption in studies include weight loss, reduction of fasting blood glucose, and reduction of LDL (bad) cholesterol with an increase in HDL cholesterol.

People around the world use cinnamon and bay leaf tea as a natural weight-loss supplement.

While there are many gimmicky weight-loss products out there, cinnamon and bay leaf tea is one solution that actually has some backing from science.

So if you want a flat tummy, start drinking it every day!

Cinnamon has been shown to produce strong anti-obesity effects in animal studies. According to a 2017 study, cinnamon activates thermogenic and metabolic responses in mouse and human primary subcutaneous adipocytes.

Another study from 2020 found that cinnamon supplementation significantly affects obesity measures based on its positive impact on reducing body weight, body mass index, waist circumference, and fat mass in adults.

While there hasn’t been much research put into bay leaves and weight loss, many people report that the digestive support provided by bay leaves assists with relieving bloating.

If you need help in weight management, I recommend that you also take a look at this guide with the most effective teas for suppressing appetite.

This tea can help you think!

A study published in 2009 found that cinnamon actually has protective properties that might help to keep Alzheimer’s disease at bay. In addition, research shows that cinnamon treatment upregulates neuroprotective proteins that may help to fight against Parkinson’s disease.

There’s also evidence to suggest that cinnamon consumption significantly elevates the level of sodium benzoate in the brain. This is important because sodium benzoate has many important positive effects on brain functions that are linked with everything from better cognitive performance to disease prevention.

In fact, sodium benzoate produced after consuming cinnamon has been shown to increase levels of neurotrophic factors that are essential for both birthing and protecting neurons.

Bay leaves also have an interesting connection to brain health. Several cultures use bay leaves for seizures and brain disorders as part of ancient herbal medicine.

However, research on the brain benefits of bay leaves is still emerging.

4. Can Protect From Cancer

Studies also highlight the anti-cancer effects of cinnamon due to its impact on apoptosis-related pathways in cancer cells. One study released in 2010 found that cinnamon extract induces tumor cell death.

Cinnamon has emerged as a natural treatment for painful, disruptive menstrual cramps. In a 2018 study looking at the effects of cinnamon on primary dysmenorrhea (menstrual cramps), researchers found that cinnamon can reduce the intensity of cramps.

A different study from 2015 found that cinnamon consumption helped to reduce the intensity of both menstrual cramps and menstrual bleeding.

While there is less known about the link between bay leaves and menstrual cramps, the leaves have been used in ancient herbal medicine to assist with irregular periods.

Cinnamon is known as a powerful inflammation fighter. This herbal ingredient has antioxidant properties that may help inhibit cell damage caused by free radicals.

Cinnamon’s anti-inflammatory properties are so highly regarded that the Arthritis Foundation includes cinnamon on its list of foods to eat.

Bay leaves have also been found to have anti-inflammatory and analgesic activities that are believed to work using shared mechanisms.

Cinnamon is packed with antibacterial and antifungal properties that help the immune system fight off dangers. Cinnamon is also associated with wound-healing benefits.

Bay leaf is a great source of natural vitamin C that helps the body fight off infection by ramping up the production of white blood cells.

Does Cinnamon and Bay Leaf Tea Have Any Side Effects?

Drinking moderate amounts of cinnamon and bay leaf tea is likely to have only positive effects on your health. But don’t swallow large pieces of the herbs since they can’t be digested and might even get stuck in your throat. Instead, strain them off.

This herbal tea doesn’t have any caffeine so you can drink it any time of the day without worries about losing sleep.

If you are pregnant, breastfeeding, or on medication, consult your doctor before starting to drink cinnamon bay leaf tea frequently.

Also, if you have a scheduled surgery, stop consuming bay leaves at least before it. Bay leaves can slow down the central nervous system and if you are getting anesthesia during the surgery the combination might have adverse effects.

How to Make Cinnamon and Bay Leaf Tea?

Preparing this delicious herbal tea at home is easy. Of course, there are many versions so you can also add other ingredients for even more health benefits or simply for taste.

Here is what you will need for making 2 portions:

I often prepare the tea with only cinnamon and bay leaves but sometimes I add honey to make it sweet. You can also add some ginger and other herbs to the mixture.

And if you drink the tea in the morning, why not mix in some loose leaf black tea for a nice energy boost!

Can I drink cinnamon and bay leaf tea every day?

Yes, you can drink cinnamon and bay leaf tea every day. In fact, drinking it every day will give you the most benefits.

How much cinnamon and bay leaf tea should I drink?

You can start by drinking one cup of cinnamon and bay leaf tea two or three times a day. You can increase the amount or make stronger tea later.

What are cinnamon, ginger and bay leaf tea benefits?

Cinnamon and bay leaf tea has many benefits from helping with weight loss and treating diabetes to protecting your brain.

Adding ginger will make this tea even more powerful as it will further boost your brain health, improves digestion, and is a great natural remedy for colds and flu.

It’s hard to find a more powerful duo for providing an aromatic elixir that offers so many protective benefits.

Cinnamon and bay leaf tea truly gives you double the benefit with every sip.

In addition, the strong flavor of cinnamon and bay leaf tea makes it a perfect choice when you need some zestfulness in a cup!