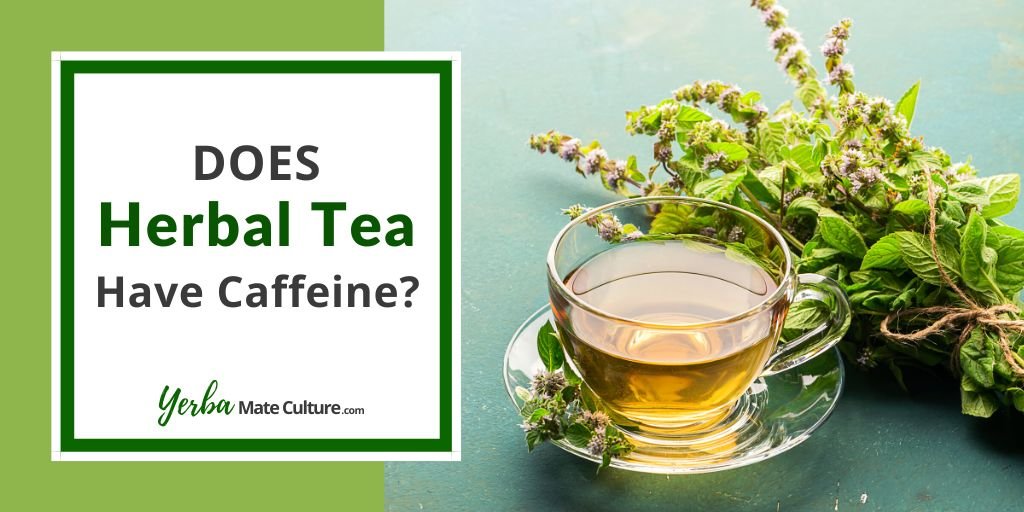 Does herbal tea have caffeine and give you the same energy boost as green tea or black tea?

The answer depends on what type of tea you’re sipping.

While most of them are caffeine-free, many people feel energized and refreshed after enjoying herbal teas. However, the effect isn’t always identical to the energy jolt that comes from traditional caffeinated teas.

Let’s answer all of your piping-hot questions about herbal tea and caffeine. You’re about to learn that herbal teas may actually hide some surprising secrets!

What Is Herbal Tea?

Herbal teas are infusions made with hot water and leaves, fruits, flowers, roots, bark, and more belonging to essentially any kind of non-tea plant.

Yes, you read that last part correctly. The big secret behind herbal tea is that it’s not technically tea at all!

Some of the common herbal infusions that aren’t teas at all include peppermint tea, chamomile tea, rooibos tea, hibiscus tea, and ginger tea.

The correct term for these non-teas is actually a tisane. But we are so used to calling them herbal teas in our everyday language that it has become a more common term.

People all over the world have been using herbal teas for medicinal and recreational purposes for centuries.

According to researchers, many herbal teas are rich in bioactive compounds called phytochemicals that offer benefits for preventing diseases including:

Do Herbal Teas Have Caffeine?

Most herbal teas are naturally free of caffeine.

The “real” teas made with leaves of the tea plant (Camellia sinensis) are naturally caffeinated. In addition to green and black tea, they include white tea, oolong tea, and pu-erh tea.

Also, some custom tea blends could contain a combination of herbal elements and caffeinated leaves from the tea plant. For example, it’s not unheard of to mix black tea with cinnamon bark for a rich, dessert-like flavor.

In addition, it should be noted caffeine occurs naturally in over 60 plants. However, some only contain trace amounts of caffeine, and most are unsuitable for making tea.

Yet, there are a few popular herbal teas that taste good and also contain high concentrations of naturally occurring caffeine.

More on those anomalous teas in just a moment!

While almost all herbal teas are caffeine-free, they can still get your engine revving!

These teas rely on bioactive compounds to naturally stimulate your body instead of using caffeine to induce a hyper state.

Here’s a look at the best herbal teas for energy:

Commonly used for energy and focus, there is scientific research to support the energizing effect of peppermint tea.

Researchers aren’t entirely sure why peppermint is so effective for increasing physical performance. It’s thought that it might have something to do with the way peppermint induces relaxation of bronchial smooth muscles that ultimately increases ventilation and brain oxygen concentration.

Peppermint has also been shown to energize the brain in some studies. A study looking at the modulation of cognitive performance and mood by aromas of peppermint found that peppermint helped to enhance both memory and alertness.

When researchers evaluated the effect of ginger on working memory and cognitive function, they found that ginger-treated groups experienced enhancements in both cognitive activity and working memory.

Ginseng has been celebrated for its energy-boosting properties for generations.

Polysaccharides, oligopeptides, and other core compounds within ginseng may help to boost energy production within the cells by lowering oxidative stress.

Some herbal teas contain calming ingredients that are great for winding down naturally.

Most people are already very familiar with the soothing effects of chamomile.

Used around the world as a natural sedative, chamomile tea has been shown to reduce sleep inefficiencies in studies. Its sedative qualities are backed by years of scientific research.

While lavender tea isn’t quite as popular as chamomile tea, it can definitely be a great gateway to relaxation.

A study from 2020 found that the consumption of lavender herbal tea can reduce depression and anxiety scores.

The last tea on the list of herbal relaxants is lemon balm tea.

This fragrant, fruity tea has been shown to ease negative moods, reduce feelings of alertness, and promote a sense of increased calmness. One study even found that lemon balm can be effective in the treatment of restlessness and dyssomnia.

Are All Herbal Teas Caffeine Free?

While herbal teas are largely free of caffeine, there is a subset of herbal teas containing caffeine.

These teas are often used to increase energy and burn fat. They can also be used as healthy coffee substitutes.

Here’s a look at some herbal teas that have caffeine:

Made from the leaves and twigs of the Ilex paraguariensis plant after they are dried, yerba mate tea is popular throughout South America.

The traditional way of drinking it includes a metal straw (bombilla) and a gourd, but you can also just brew it like any other tea and drink it from a mug.

Yerba mate tea is a great alternative to coffee if you are having stomach problems or other issues with drinking coffee, but still want to get an energy boost and burn fat more efficiently.

Guayusa herbal tea comes from a holly plant (Ilex guayusa) that is native to the Amazon. As the botanical name suggests, it’s a relative of yerba mate and has many similarities.

The leaves that are picked and dried to make herbal tea contain significant concentrations of caffeine. It’s not uncommon for one cup of Guayusa tea to contain 80 milligrams of caffeine.

The big draw of this high-caffeine tea is that it’s full of antioxidants called catechins that may offer protection against inflammation, heart disease, certain cancers, and type 2 diabetes.

Another cousin of yerba mate, Ilex vomitoria, commonly known as yaupon holly is a plant native to southeastern North America. It has been used by Native Americans to drink a ceremonial herbal tea called black drink.

Gaining some popularity, America’s forgotten native tea plant is now being cultivated in Florida and Georgia and is available online and in some specialty stores.

Guarana herbal tea is made using seeds from a South American tree (Paullinia cupana) that produces a fruit that’s similar to a coffee bean. Guarana tea’s high caffeine content has caused it to become a popular energy drink.

So should you consider swapping coffee for one of these caffeine-rich herbal teas?

The four herbal teas introduced above have something else in common that has nothing to do with caffeine. All of them are currently being researched for their bold health benefits and so far the results are very promising!

I recommend that you try one or all of them and see how you like the taste and effect compared to coffee.

How much caffeine is in a cup of herbal tea?

Most herbal teas don’t have any caffeine.

However, there are some herbal teas, like yerba mate, that can have almost as much caffeine as a cup of coffee. The exact amount of caffeine depends on the specific product you use and how you brew it.

Which herbal teas have caffeine?

The most popular caffeinated herbal teas include yerba mate, guayusa, yaupon holly, and guarana. There might also be other less-known herbal teas that contain some caffeine.

Herbal teas are not decaf. As most of them are naturally free of caffeine, there is no need for the decaffeinating process.

There’s definitely room in life for both herbal tea and true tea.

Herbal teas are also great for getting that steeping experience if you have to cut caffeine from your life. The key with herbal teas is to do your research to verify caffeine content, ingredients, and flavors.

Ultimately, a cup of herbal tea can help your senses to escape to an enchanted forest of flavors!