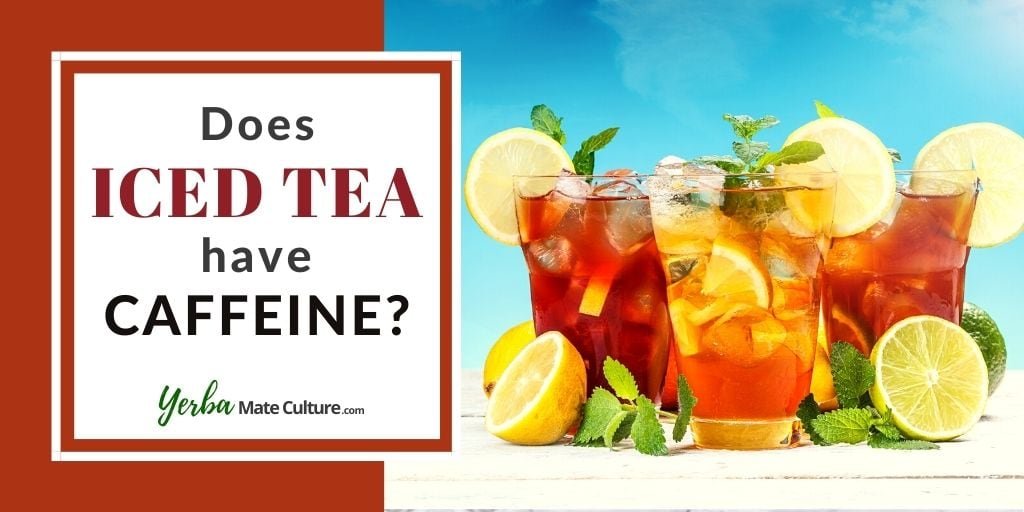 Is iced tea the best choice if you want a refreshing brewed drink without caffeine?

While it doesn’t have as much caffeine as iced coffee, there’s a good chance that the summertime elixir in your cup has at least some.

The reason why, is because most iced teas are made using black tea that naturally contains caffeine. However, you can be pretty confident that you’ve found a caffeine-free iced tea if you see an herbal iced tea on a menu.

Always be sure to ask the barista about the caffeine content of your drink if you’re avoiding caffeine for serious reasons.

There’s one more thing to remember when ordering iced tea!

“Iced tea” doesn’t mean the same thing at all restaurants.

In some places, ordering iced tea means getting plain brewed tea that is served fully “naked” without any sweetener. At other restaurants, iced tea actually means “sweet tea.”

We all know that kids love iced tea, especially when it’s sweet. But be careful — giving a lively youngster loads of caffeine and sugar might not be the best idea!

While brewed tea doesn’t contain any sugar, sweeteners, syrups, or flavoring, a cup of sweet tea will be sweetened with sugar or syrup.

Some people love the comforting and invigorating flavor of sweet tea but others prefer to sweeten their tea “just the way they like it” using plain brewed tea as a base.

How Much Caffeine Is in Iced Tea?

It’s difficult to give an exact answer on how much caffeine is in a serving of iced tea because different brands and coffee shops use their own tea types, brewing methods, and serving sizes.

However, you can get a pretty good idea of an iced tea’s caffeine content just by knowing the style of tea being served.

Take a look at the four options you can find in restaurants and stores, or brew at home:

Hot-brewed iced tea is made using the traditional process of steeping tea bags or loose leaves in a pot of boiled water. The tea is then simply chilled down before serving it.

This is the iced tea you’ll see served at most restaurants.

Cold-brewed tea is all the rage at the moment because people love its smooth flavor and artisan quality.

Cold brewing is a slow process that involves steeping tea in water for hours inside a refrigerator instead of using hot water. The cold-brew method makes smoother, sweeter tea without the bitterness of traditionally steeped teas.

It also reduces the caffeine content when compared to hot-brewed tea. It’s common to see between 15 mg and 20 mg of caffeine in a 16-oz glass of cold brew.

Most people associate powdered iced tea with backyard cookouts on warm summer days. But have you ever wondered how powdered ice tea is made?

Instant powdered tea is made by extracting liquor from processed back tea leaves. The extract is then concentrated under low pressure before being dried to a powder.

After that, the finished product goes through a freeze-drying or vacuum-drying process to preserve freshness. Most brands also add sugar for flavor.

If you are for a healthy option, then you should probably skip the powdered iced teas — the processing decimates most of the healthy antioxidants found in tea leaves. In addition, powdered iced teas may contain harmful levels of fluoride.

4. Iced Tea in Bottles and Cans

Bottled and canned teas tend to have higher concentrations of caffeine simply because brands make their iced teas in hot-brewed batches.

So when you drink a bottle like this, you’ll get about half as much caffeine compared to a cup of coffee.

Does Lipton Iced Tea Have Caffeine?

Most people around the world know Lipton for being one of the largest tea manufacturers. You may have even used Lipton tea bags at home to make tea.

Lipton is also big in the ready-made tea market offering a wide variety of bottled, canned, and powdered iced teas with different flavors.

All forms of iced tea offered by Lipton do contain caffeine — the amount in 20 oz bottles is between 20 to 25 milligrams.

Does Thai Iced Tea Have Caffeine?

Thai iced tea is a sensation that’s becoming extremely popular in coffee houses and tea houses in the United States.

This sweet and flavorful iced tea is typically made of Ceylon tea, condensed milk, sugar, and coconut milk or evaporated milk. Often spices and flavors like cinnamon, cardamom, vanilla bean, and tamarind are also added.

Ceylon tea is a popular type of black tea that is served both hot and cold in restaurants throughout Southeast Asia. It is loved for its slight “citrus” flavor.

You can usually assume that any Thai iced tea that you order at a restaurant will contain caffeine due to the fact that Ceylon is a black tea that naturally contains caffeine.

Generally, a cup of Ceylon tea will have anywhere from 14 mg to 60 mg of caffeine depending on the brand and how it’s brewed — and this also applies to Thai iced tea.

Does Arizona Iced Tea Have Caffeine?

You may have seen Arizona iced teas behind the glass at nearly every gas station and convenience store around the country. Most people know that these teas are sweet and invigorating.

You might also be wondering if Arizona iced tea has real tea that actually contains caffeine.

Arizona teas made with black tea have 15 mg of caffeine per each 8-oz serving.

If you are a fan of these beverages you might be wondering, is Arizona green tea good for you?

The short answer is that it contains plenty of sugars and can not be considered a healthy drink.

White Claw doesn’t actually publish how much caffeine is contained in each serving of its adult iced tea drinks. However, the company does define the caffeine content as a “very small amount” that is found naturally in the black tea extract used to make these beverages.

Final Thoughts to Remember Before You Order – Yes, Most Iced Teas Have Caffeine

Don’t assume that you won’t have to worry about caffeine if you’re swapping out iced coffee for iced tea this summer.

While iced tea usually has much less caffeine than coffee, the truth is that many hot-brewed black iced teas actually contain caffeine levels that would be comparable to what’s found in a small cup of coffee.

It never hurts to ask a barista or waitress if there’s an option for herbal or caffeine-free iced tea. Of course, there’s always the option to brew your own herbal iced tea at home to ensure that you aren’t sipping any traces of caffeine.