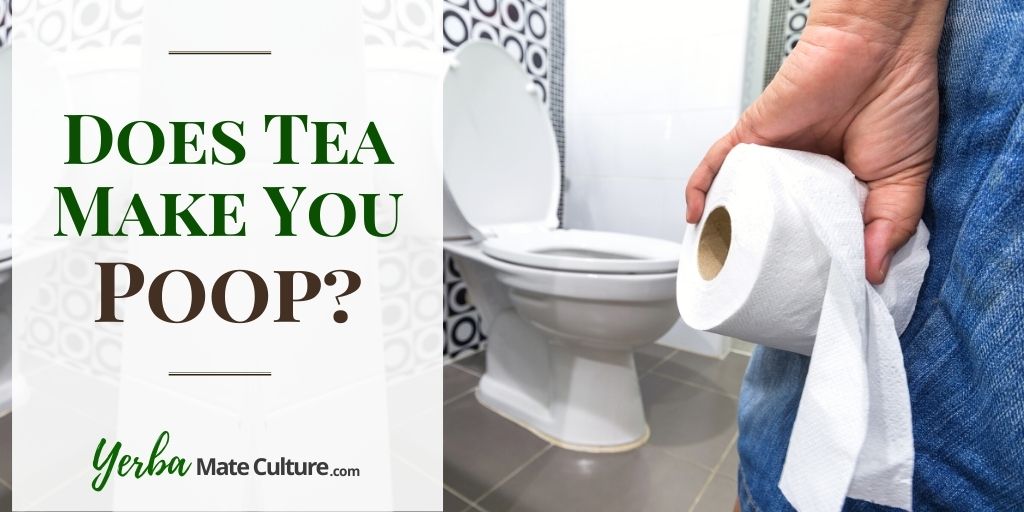 I rarely suffer from constipation. On the contrary, I have loose bowel movements quite often. So it makes sense to avoid consuming too much drinks or foods that have laxative effects.

However, I know there are many people who don’t mind a little help with dropping a deuce. We all know that drinking a cup of coffee in the morning might help this matter.

But how about tea — does it make you poop?

That actually depends on what kind of tea you are drinking. In short — yes, most teas do have some laxative properties. On the other hand, there are also some herbal teas that can be used as a remedy for diarrhea.

So let’s take a proper look at which teas promote regular bowel movements and why it happens.

Why Does Tea Make You Poop?

Whether a tea will make you poop or not mainly depends on the ingredients it contains.

Here are the three main factors:

But we have to also remember that we are all individuals and react differently.

For example, my stomach is quite sensitive to caffeine, so drinking a high-caffeine tea like Assam black tea or yerba mate will easily make me chop a log. For some other people, however, it might not have any noticeable effect.

Since caffeine is one of the most important reasons that tea makes you poop, it makes sense to take a closer look at why this happens.

The main reason caffeine makes you poop is that it activates contractions of our colon and intestinal muscles, which causes the contents of the colon to be pushed towards the rectum and come out.

On the flip side, caffeine is a diuretic, which means that it makes you urinate more. So if you consume too much caffeine and become dehydrated, you might have a dry stool that is more difficult to pass through the digestive system. So it can actually make you constipated!

Yet, it makes sense to assume that most of us drink enough water to stay well-hydrated and caffeine will have a laxative effect.

What Tea Makes You Poop?

The “real teas” are made from the leaves of Camellia Sinensis, the tea plant, which contains caffeine. But caffeine content of different types of teas varies depending on how they are processed and which variety of the tea plant is used.

Here is a closer look at some common teas:

Black Tea: Has a relatively high caffeine content, especially Assam black tea. Drink a few cups of strong black tea in the morning and it’s quite likely that the bathroom will call you soon.

Green Tea: Contains caffeine, although usually not as much as black tea. Green tea also contains some strictinin, which has laxative properties.

Pu’er Tea: Ok, this might not a very common tea but I wanted to include it here because it has a relatively high content of both caffeine and strictinin. This seems to make it the ultimate poop tea!

When it comes to my personal experience, one or two cups of green tea doesn’t really make me poop. Strong black tea often does, since it has more caffeine.

But pu’er tea, oh boy does that make me poop!

I like the taste of this fermented Chinese tea but I’ve had a few occasions where I had to run to the bathroom because I drank a bit too much. So pu’er is actually one of the best teas for constipation and it also supports healthy gut bacteria.

Herbal Teas That Make You Poop

Senna Tea: A natural remedy for constipation, this bitter herbal tea has laxative properties as it stimulates the intestines to move stool along.

Cascara Tea: Traditionally used by American Indians, this herbal tea can have a strong laxative effect. Be careful not to take too much!

Yerba Mate: South American herbal tea that contains plenty of caffeine and can have a quite potent laxative effect.

If you drink too much iced tea or sweet tea that contains a lot of sugar, it can also cause diarrhea and make you poop. The same can be achieved by adding plenty of sugar to your hot tea.

Which Teas Don’t Make You Poop?

There are situations when you definitely don’t want to rush into a toilet — like in a middle of an important meeting.

So which teas are safe to drink and don’t make you poop?

Most herbal teas are naturally caffeine-free and don’t have any laxative compounds so they don’t really make you poop. For example, ginger tea, rooibos tea, mint tea, and chamomile tea are great for promoting healthy digestion but don’t have a laxative effect.

Chamomile tea is actually one of the best teas for treating diarrhea. Yet, this doesn’t mean that it would cause constipation and prevent you from passing stool.

How to Maintain Regular Bowel Movement With Teas and More

So now you know which teas to drink if you want to make a poop and which ones are safe when you don’t, or even if you have diarrhea.

But what else can you do to keep your digestive system healthy and bowel movements regular?

Here are some useful tips:

Does Green Tea Make You Poop?

In theory, green tea does make you poop.

However, the amount of strictinin and caffeine in green tea are usually quite low, so you probably don’t have to run to the toilet after drinking a cup.

Does Black Tea Make You Poop?

Black tea usually has more caffeine than green tea. It also contains plenty of thearubigins, which are known to significantly increase intestinal motility.

Based on my own experience, one regular cup of black tea doesn’t have a noticeable laxative effect. But if I drink a few strong cups, I often feel the urge to poop.

Does Chamomile Tea Make You Poop?

Chamomile tea doesn’t make you poop since it doesn’t contain any laxative ingredients. Yet, it can help with maintaining healthy digestion and regular bowel movement because it relaxes the muscles in our digestive tract and provides warm liquids.

Does Peppermint Tea Make You Poop?

Peppermint tea doesn’t have any caffeine or any other laxative compounds. However, the menthol in peppermint tea has muscle relaxing properties that may help with digestive issues including constipation.

Enjoy your tea and stay well!

PS. I recommend that you also read this guide with teas that are good for digestion to feel better and avoid bloating, constipation, and diarrhea.