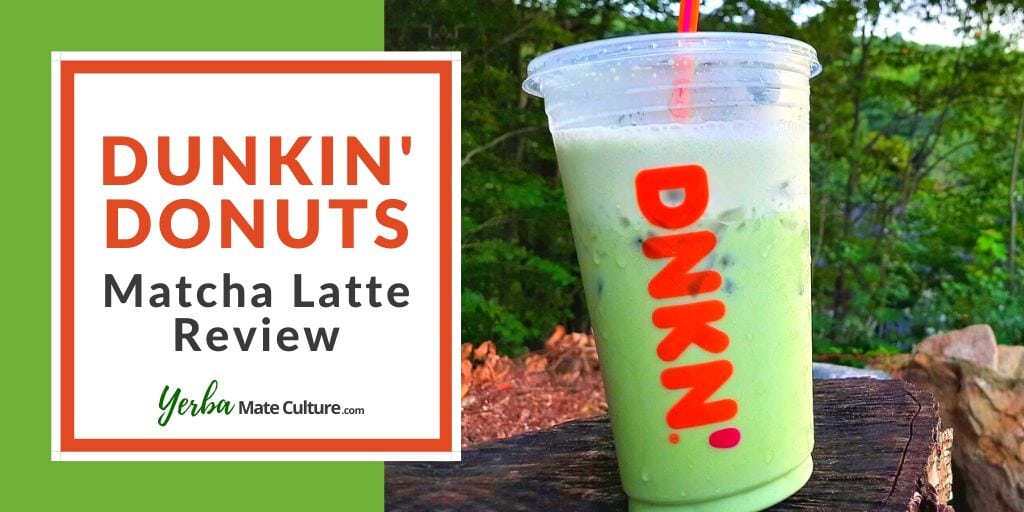 Getting a matcha latte isn’t always easy unless you have a great neighborhood Japanese tea house. That’s why it was so exciting when Dunkin’ Donuts announced that it was adding matcha lattes to the menu in 2021.

I was also pretty curious. That’s why I finally rolled into a Dunkin’ to try their iced and hot matcha lattes!

So is the Dunkin’ Donuts matcha latte worth it?

This is obviously intended to be a very palatable drink for the average Dunkin’ customer.

The next thing I noticed was that the pillow of froth floating above the green gave the drink a very creamy, dessert-like appearance. I was impressed that Dunkin’ had such a strong froth game with this drink because I’ve seen lots of “flat” matcha lattes in the past.

You can even see from the pictures how nicely the drink kept its foam as I continued to sip.

What does the Dunkin’ iced matcha latte taste like?

The taste is actually really subtle. If you like the pungent flavor with a hint of bitter notes of really strong matcha, you might be less than overwhelmed by the Dunkin take on matcha.

However, the classic nutty, grassy notes of matcha tea are fully present in every sip. The drink is also sweeter than many classic matcha lattes.

This drink is satisfying if you want to enjoy a mainstream matcha drink. It’s definitely one of the best Dunkin’ Donuts iced teas on the menu.

I’d probably order one again, even though I wouldn’t call this the best iced matcha I’ve ever tasted. With each sip, the Dunkin’ iced matcha latte kept its foaminess.

Overall, it was a tasty treat that makes a good and refreshing alternative to a regular iced tea.

If you’re wondering how to order a Dunkin’ iced matcha latte, one thing to know about this drink is that Dunkin’ actually uses a mix to make it.

Every matcha latte is made with pre-measured amounts of cane sugar, matcha green tea, and fruit pectin.

That means that you can’t ask for the strength of your matcha to be customized. In fact, it’s essentially impossible to change the basic “structure” of the drink.

However, you can request a flavor shot of coconut, vanilla, raspberry, French vanilla, caramel, or toasted almond to make a custom iced matcha latte. Dunkin’ will also let you add any seasonal flavors that are in stock.

Matcha Latte is also one of the best seller drinks at Gong Cha, a Taiwanese tea chain that is expanding rapidly in the US. Their advantage is that you can choose the level of sugar according to your preference.

Can you customize the milk in your Dunkin’ iced matcha latte?

Yes! The milk used to make the latte foam is actually separate from the matcha blend. That means you can ask for skim, whole, soy milk, oat milk, or any other option you prefer. Of course, you can also add your own sugar packets if you want to get your latte sweeter.

While I won’t go as far as calling the Dunkin’ iced matcha latte a “health” drink, I will say that checking out the nutritional information on my medium-sized order left me pretty impressed.

I will say that the heat does have an effect that brings out the nutty notes of the matcha a little more when compared to the iced version. I found the hot matcha to be both grassy and sweet.

Like the iced one, the hot one keeps its pillow of thick, frothy foam just beautifully after you start sipping.

I personally found the hot matcha latte to be perfectly tuned just as it was.

However, you can add some of the Dunkin’ latte syrup flavors if you want to make a custom drink.

While I think anything fruity would be a poor fit for the hot version, I could see how a vanilla or caramel syrup could help to bring out some of the natural dessert-like notes within the matcha.

Final Thoughts – Should You Order the Dunkin’ Donuts Matcha Latte?

Was this the best matcha latte I’ve ever had?

Honestly, I feel that Dunkin’ Donuts obviously went for a “mainstream” recipe that appeals to the masses instead of focusing on letting the strong, bitter notes of matcha that create that incredible sweet-meets-earthy contrast shine through.

Overall, both the hot and iced matcha lattes from Dunkin’ are enjoyable. I’d say they can provide a good upgrade if you’re in the mood for something that’s a little more sophisticated than an iced tea.

If you are looking for more delicious options, check out this article with the best Starbucks tea drinks.