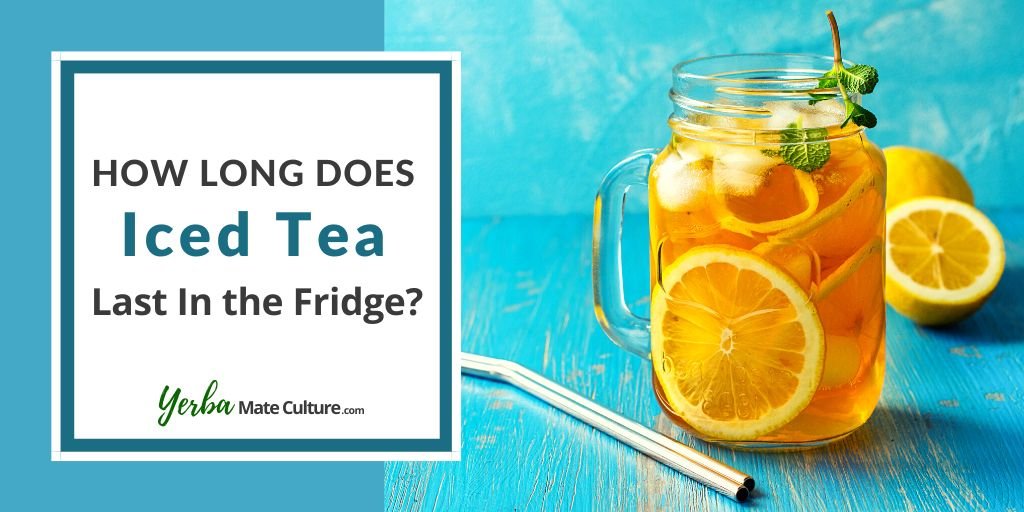 Food poisoning is synonymous with slimy sushi and bad buffets. But the truth is that any food can cause illness if it’s not properly selected, prepared, and refrigerated — even iced tea.

To date, the CDC has reported few cases of mold or bacterial contamination in home brews, but problems in restaurants suggest we shouldn’t be complacent.

So how long can iced tea be stored safely in the refrigerator? And how long does it last unrefrigerated?

The answer may surprise you.

How Long Is Iced Tea Good for in the Refrigerator?

According to a 1996 CDC memo, iced tea should only be refrigerated for up to eight hours. Based on tea industry guidelines, the recommendation is supported by limited research.

How long iced tea lasts in the refrigerator depends on a broad range of factors from the quality of your tea to how its brewed and stored.

Refrigerate the tea soon after brewing in a clean container with a lid, and it should last at least 5 days in the fridge before going bad.

Eight hours is just the threshold after which the risk of bacterial contamination rises if tea was improperly handled.

So what is improper handling?

It begins with storage. Tea leaves, for example, are vulnerable to mold and bacteria if they’re not dried and stored in a cool, dry place.

Airborne, mold can also contaminate an open pitcher of tea on the countertop. And some species will continue to grow in refrigerated tea if the brewing temperature was too low to kill it, such as with sun tea.

The storage vessel also matters. Dispensers with spigots are notoriously hard to sanitize.

Texas had several outbreaks of food poisoning attributed to restaurant tea urns in 2017 and 2018. More than 40 people were sickened.

How You Brew the Tea Matters

One of the most important considerations is the brewing temperature of the tea. Using boiling water is the safest approach, but it can make delicate teas bitter.

The CDC recommends brewing hot tea for 3-5 minutes at 195 °F (90 °C) or higher to reduce the risk of contamination.

By contrast, sun tea brewed outdoors rarely exceeds 104 °F. Cold brewing in the refrigerator is also a safe bet since the tea will not be at room temperature at all.

Does Iced Tea Have to be Refrigerated After Brewing?

Home-brewed iced tea should be refrigerated as soon as possible. As with all foods, the longer it sits at room temperature, the faster bacterial counts rise.

Ideally, hot brews should be cooled to 41 °F (5 °C) or less within 6 hours. But you don’t want to put a pitcher full of hot tea in the fridge.

Adding ice before you refrigerate the tea speeds up the cooling process. You can leave the cap ajar to let steam escape but close it quickly once the tea has cooled.

Since 2011, the CDC has discouraged making sun tea because it gets warm enough to brew tea but not hot enough to kill a bacteria called Alcaligenes viscolactis.

Present in the soil, it’s a common pathogen on herbs and tea leaves. The risk of contamination is low but not zero.

It’s hard to say exactly how long it takes for brewed tea to spoil if it’s not refrigerated. If it has been brewed with boiling hot water for several minutes and covered with a lid, it might stay good for a surprisingly long time.

But why risk it?

If you want to stay safe, discard any type of brewed tea left at room temperature for more than six hours.

Probably not, but it could give you a stomachache and diarrhea if the bacteria counts are high enough — or something worse if you’re very young, old, or immunocompromised.

And don’t count on seeing or smelling contamination. Molds may be visible, but bacteria aren’t.

In the same memo as its other recommendations, however, the CDC acknowledged that no significant outbreaks were associated with tea. Until 2010, there were none at all, and the Texas cases are among the few recorded since.

When homemade iced tea is brewed at low temperatures and stored in clean but not sterile containers, the potential for bacterial contamination is real, although unlikely.

But bottled and canned teas are pasteurized to kill any mold or bacteria from the equipment or tea leaves, eliminating “improper handling” problems. Packed in sterilized containers, you can count on them being contaminant-free until you break the seal.

Canned and bottled teas also usually contain citric acid. A natural bacterial inhibitor, it prevents the growth of bacteria and botulism spores by lowering the pH of the tea without drastically altering its taste.

Once containers are opened, however, bacteria introduced from your mouth or hands begin to multiply almost immediately.

In a hot car, for example, counts could grow fast enough to make you ill within hours. Continuously refrigerated bottles will keep for up to ten days after they’re opened.

The exception may be cold kombucha. It’s fermented and pasteurization would kill the beneficial bacteria.

The good news for kombucha fans is that Canadian research showed no incidences of Salmonella or E. Coli contamination among 60 samples tested in 2018-2019. Theoretically, kombucha should remain pathogen-free indefinitely as long as it stays refrigerated.

In small amounts, sugar fuels bacterial growth. But in high concentrations, it’s bacteriostatic, meaning that it prevents bacteria from multiplying.

Honey, a naturally bacteriostatic sweetener, is an even safer bet.

Artificial sweeteners such as sucralose, stevia, and aspartame are even less likely to feed contaminants. Studies show they have a bacteriostatic effect on the mouth and gut.

Whether or not it’s enough to impact tea safety, however, is unclear.

How Long is Iced Tea Good For – Final Thoughts

Refrigeration lowers but doesn’t eliminate the risks. The CDC guidelines are harsh but in keeping with research and tea industry recommendations despite consumer habits.

Here are my tips for storing your iced tea safely:

Ultimately, only you can decide how long to keep refrigerated iced tea.