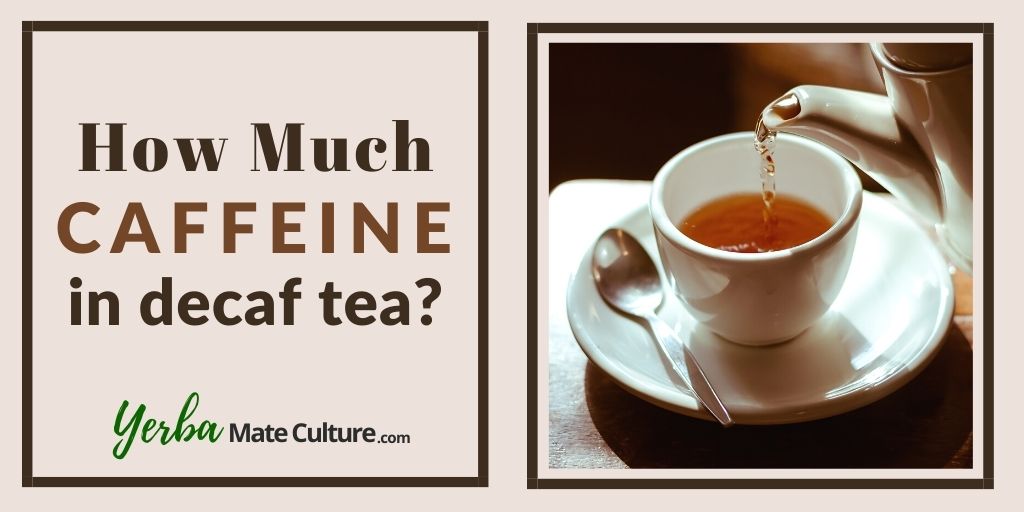 Tea time doesn’t have to leave you all wound up even if you don’t want to ingest any caffeine. Tea drinkers have many great options for decaffeinated tea that won’t make them feel like they’re sacrificing the authentic “cuppa” experience.

However, people who are serious about avoiding caffeine many have questions about just how much caffeine is lingering in decaffeinated teas.

Let’s take a look at some facts before the next tea time!

Does Decaf Tea Have Caffeine?

All tea made with the tea plant (Camellia Sinensis) naturally contains caffeine. However, the amount of caffeine per serving can vary wildly based on the type of tea being brewed.

Even after the decaffeination process, there will still be some caffeine left in the tea. In a 2008 study, the caffeine content of decaf teas varied between 1 and 10 milligrams per 6 oz cup.

The exact amount depends on the type of tea, the method of decaffeination, and how you brew it.

Here’s a quick rundown of average caffeine content in popular teas and herbal infusions that are not decaffeinated:

How do caffeinated teas compare to coffee?

How Is Decaffeinated Tea Made?

Like coffee, tea can undergo a decaffeination process that produces what is essentially caffeine-free tea. This process allows people who love rich, flavorful black, green, and white teas that contain natural caffeine to indulge in satisfying sips without worrying about being up all night.

The flavor, appearance, and “feeling” of the tea are all preserved during the decaffeination process.

There are 4 common methods for removing the caffeine in decaf tea:

Some people consider this the best option for preserving the natural flavor of the tea but it might not be the healthiest option.

You’ll often see teas that have been processed using ethyl acetate labeled as “naturally decaffeinated teas.” The reason for this label is that ethyl acetate is actually found naturally in tea.

Commonly used for loose teas and sachets, the CO2 method is considered another “natural” method for removing the caffeine in decaf tea. It’s also thought by many to be the best option for preserving the natural flavors and antioxidants in tea.

The CO2 decaffeination process works by treating the tea leaves at a high temperature with CO2 to cause the CO2 to take on a form that attracts the small caffeine molecules like a magnet.

While water processing can extract caffeine, it’s not a method that is used commercially due to the fact that it “waters down” the natural flavor of the tea.

It works by simply soaking the tea in hot water for a long period of time to cause the caffeine to leach out. The tea water is then put through a carbon filter that removes the caffeine content.

Finally, the strained water is added back into the tea so it will reabsorb oils and flavor.

Another type of water processing is something that people sometimes do in their own kitchens when they run out of decaffeinated tea.

This is done by simply steeping caffeinated tea and then dumping it to remove the caffeine and then steeping the tea again. The bad news is that this method doesn’t work very well since plenty of caffeine will still be left in the tea.

If you only have regular tea available but want to enjoy a cup before going to sleep, one option is to steep it at a lower temperature for only about 30 seconds. As a result, less caffeine will dissolve in the water.

Having an electric kettle with temperature control makes it easy to do this.

How Much Caffeine Is in Decaffeinated Tea?

Most decaffeinated teas only contain about 2 milligrams of caffeine per cup.

Yet, the caffeine count can go as high as 20 milligrams for some decaf tea varieties.

But there are standards that ensure you won’t accidentally get a caffeine jolt when you buy decaf teas from retailers. The law requires that all teas labeled as “decaffeinated” must have less than 2.5 percent of their original caffeine levels.

Teas that are decaffeinated using the CO2 method often contain the lowest levels of caffeine while still offering all of the health benefits of tea.

How About Herbal Tisanes?

People who aren’t comfortable with even trace amounts of caffeine in tea might want to consider switching to herbal teas because most of them are naturally caffeine-free. That’s because herbal teas aren’t actually teas at all.

Where Can I Buy Decaf Yerba Mate?

Many people have been asking me where they could find decaf yerba mate tea.

Unfortunately, it seems like there is no decaf yerba mate available at the moment. There used to be a product called Unión Relax Yerba Mate but it’s now discontinued and out of stock everywhere.

How Much Caffeine is in Lipton Decaf Black Tea?

Lipton is one of the most sold tea brands in the world and they also have decaf black tea bags in their selection.

Luckily, the study about the caffeine content of different types of teas (referred to earlier in this article) included Lipton Decaf Black Tea.

Thus, we know that a 6-ounce cup of Lipton Decaf contains about 2 to 3 milligrams of caffeine depending on how long you steep it.

How Much Caffeine is in Bigelow Constant Comment Decaf Tea?

The Bigelow Constant Comment decaf tea contains less than 2 milligrams of caffeine even if you steep it for 5 minutes.

We don’t have any data on other Bigelow products, like Bigelow Decaf Green Tea and Bigelow Decaf Earl Grey but I think it’s safe to assume that they have been processed with the method as the Constant Comment and have very low caffeine content.

How Much Caffeine is in Stash Premium Green Decaf Tea?

Also featured in the study is a well-liked product from Stash — their Premium Decaf Green Tea.

Surprisingly, a 6-ounce cup of the Stash Premium Green Decaf has 10 milligrams of caffeine if steeped for 5 minutes.

This is way more than in the Lipton and Bigelow decaf black teas!

However, if you reduce the steeping time to 1 minute, also the amount of caffeine will be lessened to about 5 milligrams.

How Much Caffeine is in Twinings Decaf English Breakfast Tea?

Unfortunately, this highly popular decaf tea is not included in the study so we don’t have really accurate data on its caffeine content.

According to Twinings, their decaf teas contain about 2 milligrams of caffeine per cup.

Decaffeinated tea can be part of a relaxing nighttime ritual without worries about staying up all night.

Here are some reasons to go decaf:

Rich in Antioxidants: Black, white and green teas are bursting with antioxidants that can fight aging and disease.

Drink Before Bedtime: Consuming caffeine late in the evening is shown to cause sleeping problems. This is not an issue when you drink decaf.

Sensitive and Pregnant People: People with caffeine sensitivities can still enjoy mugs of hot, satisfying tea. The same goes for women who are pregnant or breastfeeding.

Safe for Kids: Decaf tea can be a family affair. It’s fine to give a sip of your tea to a child when there’s no caffeine.

No Addition: Caffeine is known to be addictive. But you don’t have to worry about this with decaf tea!

Non-Diuretic: The problem of rushing to the restroom due to the natural diuretic effect of caffeine is gone. This can be important for people who like to enjoy tea at work.

No Jitters: Decaffeinated tea won’t cause “the jitters” if you drink multiple cups. This can be important for people with anxiety or restlessness.

Good for Hydrating: Decaffeinated teas are better at hydrating you.

No Headaches: People who have headaches triggered by caffeine can sip without worries.

The levels of caffeine in decaf tea are considered negligible. This means that decaf tea won’t cause aggravation for people who are sensitive to caffeine.

However, it is important to remember that the nominal amount of caffeine in each cup can add up if you’re sipping cup after cup. That means it’s important for people who are avoiding caffeine for medical reasons to be vigilant about consumption.

The good news is that the decaffeination process for tea preserves nearly all of the flavor, aroma, and antioxidants that offer benefits for both physical health and emotional enjoyment!