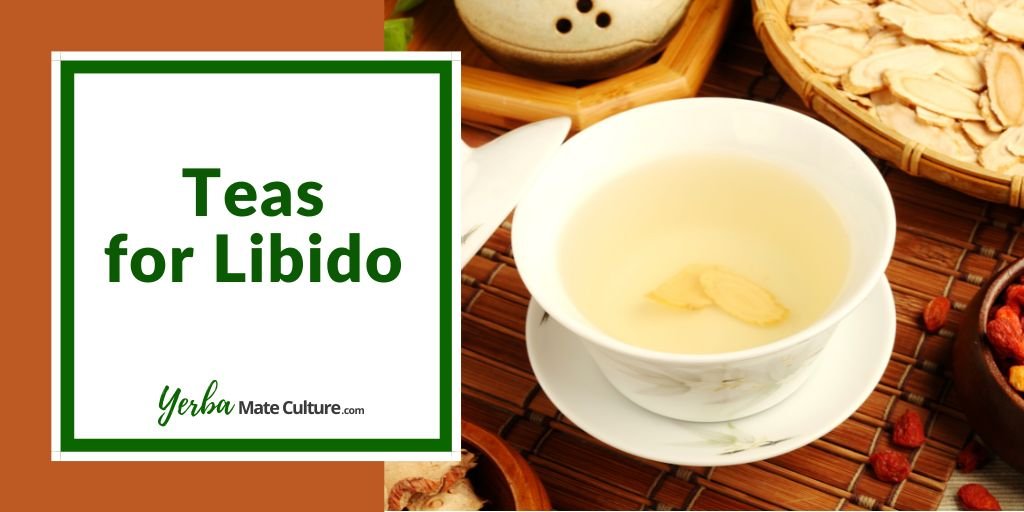 People have been using teas to restore libido for centuries.

Unlike pills and medicines that promise to get the job done, herbal teas offer a holistic, natural way to activate drive and performance without side effects.

There’s nothing magical or mystical about why some teas help to boost libido and sexual performance. It all comes down to the natural compounds found in many common herbs.

Whether you are a man or a woman, you can find the best herbal teas for bolstering your libido and boosting your sex drive in this guide.

Here is a summary of the 5 best teas to increase libido:

The 5 Best Herbal Teas for Libido

Ginseng is a healthy root herb known for its energy-increasing effect. It’s considered the gold standard for libido boosting around the globe.

That’s because ginseng is a known aphrodisiac. According to a 2013 study, ginseng can increase libido and copulatory performance. In a double-blind, placebo-controlled Korean study, ginseng has been proven as a successful treatment option for erectile dysfunction.

However, what may be even more important than the noticeable benefits on libido is the fact that ginseng has been shown to improve sperm quality and count.

For example, a 2010 study found that oral administration of ginseng improved sexual arousal in menopausal women.

Also known as Peruvian ginseng, maca is an Andean plant that has been used as both food and medicine for thousands of years.

Research shows that maca may have an overall beneficial effect on libido for both men and women.

What’s more, a 2015 study that looked specifically at maca root’s ability to treat antidepressant-induced sexual dysfunction in women found that this herb is a safe, well-tolerated option for relieving sexual dysfunction.

Known for centuries under the title of “potency wood” by the Amazonian people, muira puama is credited with being a body stimulant and aphrodisiac. It is commonly used to support erectile response, restore libido, and assist with the effects of fatigue on sexual health.

Muira puama’s powerful benefits for sexual health are thought to be owed to its concentration of sterols that serve as building blocks for sexual hormones.

Studies indicate that muira puama has nerve-stimulating properties that can help with treating erectile dysfunction. Men with low libido and diminished erectile capacity have found this herb to promote notable increases in libido and erection quality.

Results on muira puama’s effects on female libido have also been positive.

Also known as winter cherry, ashwagandha is an evergreen shrub that grows throughout India, the Middle East, and parts of Africa.

Ashwagandha is used far and wide for its ability to boost the immune system, help the body cope with stress, increase energy levels, and promote improved concentration. This evergreen can also work wonders for sexual health.

A 2022 study on well-being and sexual performance in adult males found that ashwagandha assisted in increasing serum testosterone levels in participants.

A 2019 study that looked specifically at the effects of ashwagandha supplementation among adult overweight males found that eight weeks of supplementation produced significant improvements in salivary DHEA-S and testosterone levels.

Ginkgo biloba is one of the world’s oldest living tree species. It’s also one of the best herbal teas for memory and focus, vitality, and sexual health.

The positive effects of ginkgo biloba include increased sexual desire and excitement in both men and women.

When researchers focused on the effects of ginkgo biloba extract on sexual dysfunction in women, they found that long-term supplementation significantly increased sexual desire and contentment beyond placebo.

You might be wondering if you need to seek out an exotic herbal tea to enjoy a boost for your libido.

The truth is that not all teas contain compounds needed to stimulate the reproductive system. Nevertheless, some “everyday” teas made with the tea plant do mirror the benefits of the slightly more exotic teas used in herbal medicine.

Black tea is one of those teas. According to researchers, brewed black tea may stimulate aphrodisiac activity.

A study published in 2008 credits black tea with being a quick-acting, safe oral aphrodisiac that can be useful for treating premature ejaculation, impaired libido, and other sexual inadequacies. However, this study was performed on rats and there are no human studies that demonstrate black tea’s potential as an aphrodisiac.

Unfortunately, there is no research related to yerba mate and libido.

However, yerba mate tea has a reputation for being a mild aphrodisiac and it has been traditionally used to increase libido and sex drive. Personally, I have noticed that its uplifting and relaxing effects can definitely help with lighting up the desire.

This herbal tea is also rich in minerals (iron and magnesium) and vitamins (especially vitamins B1 and B6) that may improve fertility and reproductive health.

The safety, low cost, and enjoyableness of herbal teas all create the perfect reason to brew a cup for sexual health.

And the best part about boosting your libido with herbal teas is that all of the same properties that help to improve sexual health and function are also terrific for overall health.

You can also consider using the same herbs as capsules — if you don’t want to brew tea every time, this could be a more convenient option. In addition, the capsules may help you ingest larger amounts of the active compounds compared to what is typically found in a cup of tea.

2 thoughts on “5 Best Teas for Libido – Find a Natural Way to Increase Your Sex Drive!”