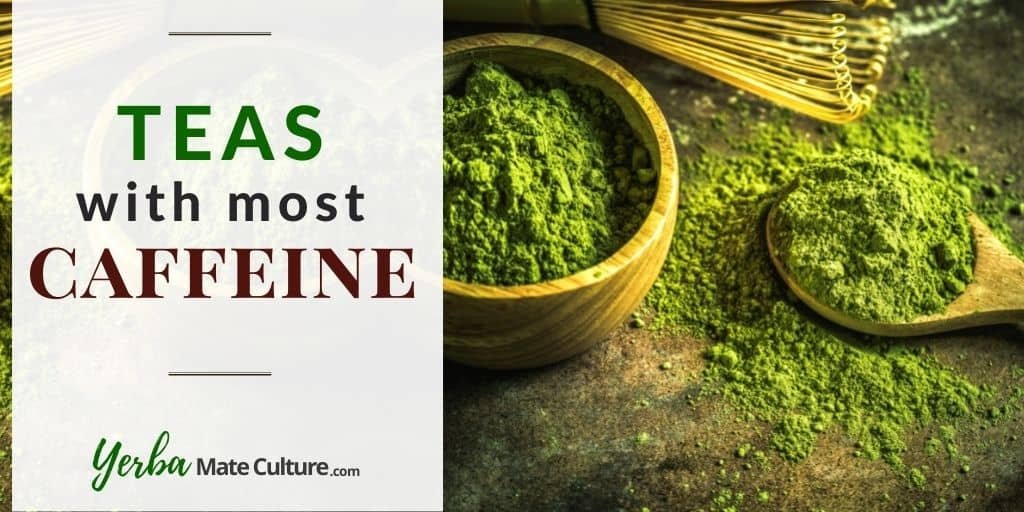 Different types of teas and herbal infusions can provide a healthy way to increase your energy levels. And all of us need a boost sometimes!

Whether you are looking for something to get you started in the morning or want to get that extra kick to exercise and burn fat more efficiently, there are many great options that you might not even have heard about.

If you just want to quickly compare the amount of caffeine in different teas and other popular beverages, take a look at the infographic below:

Top 3 Teas with Most Caffeine

Everyone knows that coffee has high caffeine content and gives you energy. But which tea has the most caffeine?

In the contest of high-caffeine teas, there is no clear winner. The reason is that the way you prepare your tea will affect its caffeine content.

For example, if you make matcha tea with two teaspoons of matcha powder, the tea will be twice as strong as if you only use one teaspoon.

While we can’t name one tea that has the most caffeine, here are the beverages that form the top 3.

Yerba mate tea is a traditional South American drink with many health benefits. The caffeine content of dry yerba mate leaves is usually between 1% and 1.5%.

When prepared with the traditional method of using a gourd (cup) and bombilla (metal straw), it might just be the tea with the most caffeine.

8 ounces (one cup) of yerba mate tea can have up to 180 milligrams of caffeine!

The high caffeine content is due to the fact that as much as 50 grams (1.8 oz) of dry loose leaf mate is often used per 500 ml (17 oz) of water when prepared with the traditional way. However, if you brew your mate tea with some other method, like using tea bags, it will have much less caffeine.

One thing to note here is that yerba mate is not made from the tea plant (Camellia Sinensis). Thus, some people wouldn’t even call it a tea, but a herbal infusion.

Made with powdered green tea, matcha is a popular Japanese drink that has high caffeine content. It’s generally considered the strongest tea coming from the tea plant.

The reason matcha has so much caffeine is that you actually consume the powdered tea leaves. This means you get all the caffeine in the leaves, not just the part that is dissolved into the hot water.

When you make one 8 oz cup of tea by using one teaspoon of matcha powder, it has about 70 milligrams of caffeine.

Of course, if you like your matcha extra strong, you can use more powder to make an even stronger cup.

Relatively unknown in the Western world, guayusa tea is another South American drink that is a close relative of yerba mate.

Dry guayusa leaves have about 1.7% to 3.5 % caffeine content, which is even higher than in yerba mate. Guayusa tea can be prepared with a traditional method similar to yerba mate, with tea bags, or in a teapot like any other loose leaf tea.

Usually, the amount of guayusa leaves used is less compared to when brewing yerba mate tea. This results in a drink that has about the same amount of caffeine as yerba mate.

The variety that is used has a significant effect on the black tea caffeine content as products made with the assamica plant generally have more caffeine.

A cup of black tea has about 50 milligrams of caffeine.

Pu-erh tea is a traditional Chinese drink with deep earthy flavors. It’s produced by compressing the tea leaves into cakes and fermenting them for as long as 15 years.

The caffeine content of Pu-erh tea is comparable to black tea.

How About Green and White Tea?

Both green and white teas are made from the tea plant and contain a moderate amount of caffeine. The reason why these teas usually have less caffeine than black and Pu-erh tea is mainly due to the lower brewing temperature.

Yet, some varieties of green tea are shaded for several weeks before harvest, which increases their caffeine content. If you use this type of green tea you might get a drink that has as much caffeine as black tea.

White tea caffeine content also varies greatly depending on the type of tea you buy. For example, silver needle white tea consists of young tea buds and has more caffeine than most other white teas.

If you want to drink a warm cup late in the evening, it might be best to avoid caffeine. Here are some low caffeine options to consider.

Decaffeinated teas are usually black and green teas that have been processed to reduce their caffeine content. They can still have a small amount of caffeine depending on the decaffeination process that was used.

When you are looking for a tea without caffeine, you should consider herbal tisanes.

Most of them are naturally caffeine-free. This means you can safely drink them before going to bed even if you are sensitive to caffeine.

Many herbal teas are also potent natural remedies for anything from cough and colds to digestive problems.

One of my favorite options in the evening is a cup of relaxing chamomile tea. It’s proven to be effective for reducing stress and improving sleep.

What Affects the Amount of Caffeine in Tea?

Now we have discussed which teas have the most caffeine. But the kind of tea you use is not the only thing that matters.

There are several factors that affect the caffeine content of your tea:

Type: The most important factor is the variety of tea or herbal ingredient you use for preparing your tea. Choose yerba mate, guayusa, or matcha to make a cup of high caffeine tea. As mentioned earlier, the tea plant also has two varieties. The assamica variety native to the Assam region in India usually has more caffeine than the Chinese variety of the tea plant.

Growing and Harvesting: Shading the tea plant before harvesting increases the amount of caffeine in the tea leaves. The same applies to many other plants such as yerba mate. In addition, teas harvested in the spring tend to have more caffeine compared to teas harvested later in the year.

Processing: The main reason for the high caffeine content of matcha is that it’s produced by grinding green tea leaves to fine powder, which is consumed when drinking the tea. In other types of tea, a finer cut results in more caffeine being dissolved faster while brewing the tea. If you buy loose leaf yerba mate, the amount of palos (stems) affects the caffeine content. Pure ground yerba mate leaf has more caffeine than a mixture of leaves and stems.

Ratio of Tea and Water: The more tea leaves you use for brewing a cup directly affects the strength of your tea. This is why using tea bags often results in a milder infusion compared to brewing loose leaf in a teapot.

Steeping Time and Temperature: The longer you let your tea steep the more caffeine will be dissolved into the water. Also, a higher brewing temperature will make the caffeine dissolve faster. That’s one of the reasons why black tea and Pu-erh tea, brewed with almost boiling hot water, have more caffeine compared to green and white teas steeped in much lower temperatures.

Knowing how much caffeine is in different types of teas helps you with getting the right kind of energy boost. Now you also know how to brew them to maximize the amount of caffeine.

Yet, you should still remember that using water that is too hot or brewing the tea for too long, can result in a bitter or otherwise unpleasant taste.

Yerba mate tea is definitely one of my personal favorites for an energizing drink. If you want to try it, check out my reviews of the best yerba mate brands to find a nice product.