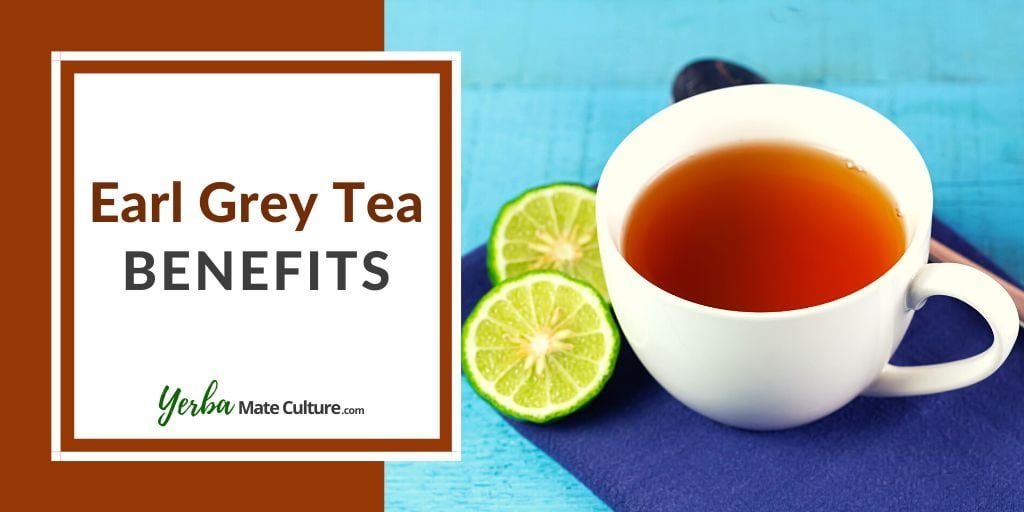 We all know how a warm cup of Earl Grey tea benefits us on an emotional level.

The strength of the black leaves tempered by citrusy hints of bergamot rind really massages the taste buds. You can practically smell the charm and grandeur of the London tea house where this blend was invented in the 1800s every time you lift your cup.

However, Earl Grey proves that what’s good for the soul can also be good for the body. This tea is packed with health benefits!

In addition, it’s a great way to put some pep in your step if you don’t drink coffee.

Here’s a proper look at why a cup of Earl Grey tea is good for you.

What Exactly is Earl Grey Tea?

There are many legends about how Earl Grey tea was invented, but the fact is that it became a popular refreshment among the British nobles in the late 19th century.

Boasting an intense citrusy flavor, the best Earl Grey brands use a blend of quality black teas with cold-pressed oil from the peels of Bergamot orange.

The combination of flavors from bold black tea and fresh citrusy oil creates a unique blend that is now popular all over the world.

There are also other variations of this tea. Some have green tea and others are made entirely of herbal ingredients like rooibos.

If you love the fresh citrus notes in Earl Grey, you can also consider trying a companion tea called Lady Grey that features cornflowers and Seville oranges for an even stronger citrus flavor. Or you might want to have a taste of the Russian Earl Grey which contains citrus peel and lemongrass in addition to the oil of bergamot.

If you’re thinking of adding a cup of Earl Grey to your morning routine, the health benefits below provide all the reasons you need to make the change.

Earl Grey can also be a great substitute if you’re giving up coffee because it offers about 40 mg to 80 mg of caffeine per cup. So don’t be surprised if you start to feel sharper than ever in the morning!

The exact amount of caffeine in a cup of Earl Grey depends on the brand of tea you use and how you brew it.

According to a 2017 study looking at the effect of black tea on human cognitive performance in a cognitive test battery, black tea consumption sped up performance, improved memory, and reduced the number of errors in the various cognitive tasks.

The exciting news about the results of this study is that they prove you don’t have to spend your day chugging tea to get a brain boost. Researchers found that even a small amount of black tea consumption sped up cognitive processing.

Researchers say Earl Grey may be lightning in the bottle when it comes to feeling lighter. According to a 2014 study, short-term regular ingestion of black tea over three months can improve body weight and body fat distribution.

What’s more, Earl Grey was found to offer these benefits in comparison to a caffeine-matched control beverage that did not produce the same results. That means that we can rule out that it’s “just the caffeine” in Earl Grey that’s responsible for fat burning.

I use the combination of drinking tea and fasting and it has proven to be very effective for burning fat.

But maybe you are wondering, can you drink tea while fasting?

Yes, having a cup of Earl Grey without milk or sweeteners will not break your fast.

According to scientists, Earl Grey tea is also good for your heart health.

It all comes down to the evidence collected on the way that non-caffeine components called flavonoids improve cardiovascular health.

Most people who pay attention to health news know by now that it’s very important to eat an antioxidant-rich diet.

Antioxidants are substances that protect the body’s cells against damaging free radicals that are linked with premature aging, heart disease, cancer, and many more illnesses.

Nobody can avoid free radicals because they are produced when our bodies break down all of the toxins we are exposed to as a part of daily living.

However, we can fight back against them using antioxidants. And black tea is full of antioxidants!

As explained earlier, Earl Grey is made of black tea and bergamot oil.

Bergamot is a citrus fruit with high vitamin C content. Vitamin C plays an important role in immune function. In fact, a deficiency of vitamin C can result in serious illness.

In addition, Bergamot fruits contain D-limonene, which supports the natural autophagy process that helps clean out damaged cells in our bodies to regenerate newer, healthier cells.

The natural citrus bergamot found in high-quality Earl Grey tea contains D-Limonene, a substance that has been linked to supporting autophagy.

Black tea is also a powerhouse for boosting the immune system. According to a 2014 study, black tea increases kynurenine and KYN/TRP to indicate enhanced tryptophan breakdown.

So what exactly does this mean?

Researchers have essentially discovered that drinking black tea activates biomarkers of immune system function that may be responsible for the tea’s general health benefits.

It’s recently been discovered that black tea is actually a prebiotic.

Prebiotics are substances that induce the growth of good microorganisms that contribute to a person’s well-being by feeding the “good” bacteria in the gut that fends off illness, boosts the immune system, and promotes healthy digestion.

How to Brew a Perfect Cup of Earl Grey

Making a nice cup of Earl Grey is easy — it all comes down to having good quality tea and steeping it so that it matches your personal taste preference.

Here is how to brew a cup of Earl Grey:

If you feel like your tea is too strong, try steeping it in water that is not boiling hot. Instead, let the water cool down for a few minutes after boiling.

Having some premium Earl Grey and want to take it up a notch?

For the best result, use fresh spring water that has a neutral pH and a relatively low mineral content.

Final Thoughts on the Health Benefits of Earl Grey Tea

It’s incredible that a simple cup of warm, satisfying Earl Grey can potentially offer all of these health benefits. Sticking with quality leaves is the best way to enjoy the potency needed to get these benefits.

It doesn’t mean that it has to be bad for your health, you can choose a healthy tea sweetener for guilt-free enjoyment.

Now, it’s time to put the kettle on the stove and make a cup. While you’re sipping your Earl Grey, think about all the benefits and nourishment it will provide you with!