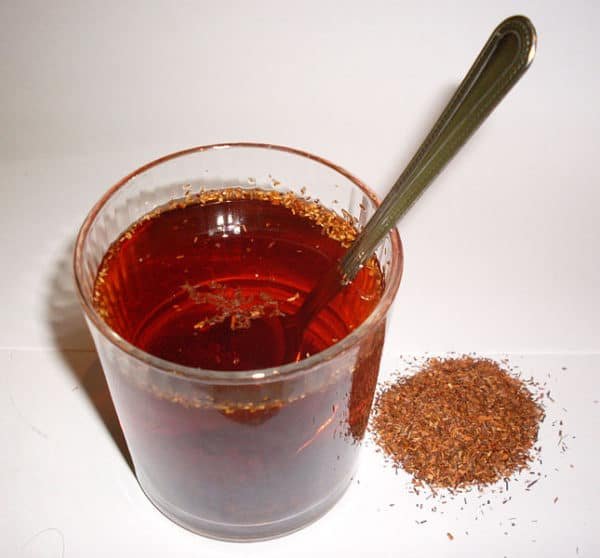 If you are wondering what is red rooibos tea, you should definitely read this article. Rooibos tea is one of my favorite herbal teas because it tastes delicious and has many health benefits.

Continue reading, and learn about the history and great healing powers of this amazing beverage!

Rooibos tea contains no caffeine and no calories. Instead, it contains a lot of antioxidants and a variety of beneficial minerals. That is why this South African beverage is so healthy and I can sincerely recommend it for everyone.

The indigenous Khoisan people of the Clanwilliam region in South Africa have been using rooibos leaves for thousands of years. To the Europeans, the first reports of rooibos came from Carl Thunberg, a Swedish botanist, who traveled to South Africa in 1772. He noticed that the Khoisan people climbed to the mountains and gathered leaves from wild rooibos bush.

After foraging for the leaves, the Khoisan would roll them into bags and bring them down from the mountains. Then the leaves were chopped smaller with axes, battered with hammers, and dried in the sun.

The Khoisan used the rooibos leaves to make herbal remedies for many different conditions.

In the 18th century, the Dutch settlers started drinking rooibos tea, mainly because it was cheaper than black tea imported from Europe. A Russian immigrant named Benjamin Ginsberg became fascinated about rooibos tea during the early 20th century. He is often called the father of commercial rooibos tea, and he was the first one to cure rooibos leaves by fermenting them in barrels.

Rooibos production started to increase in the 1930s when Dr. Pieter Le Fras Nortier developed a method for germinating rooibos seeds, which allowed larger-scale cultivation of the plant. Dr. Nortier also researched the medicinal properties of rooibos, and his work was continued by Dr. Annetjie Theron who discovered that rooibos helped with her baby’s colic.

Today, it is well-known that rooibos has many health benefits, and its global demand is high and is increasing quickly. However, it is cultivated only in South Africa. The attempts to grow it in other countries have failed.

What is Red Rooibos Tea

Red rooibos tea is brewed from fermented rooibos leaves. The fermenting process gives the leaves a reddish-brown color and a sweeter flavor.

Tea made from fermented rooibos leaves tastes earthy, smooth, and a bit sweet. It contains high levels of antioxidants and is considered very healthy.

Green rooibos tea is brewed from unfermented rooibos leaves. The leaves are harvested early in the morning and dried quickly to avoid fermentation.

Thus, the leaves retain their green color and have an even higher amount of antioxidants compared to red rooibos tea. After drying, the leaves are cooled and then packaged.

The taste of green rooibos tea is more grassy and mild compared to red rooibos.

How to Brew Rooibos Tea

You can brew rooibos tea by boiling spring (or filtered) water and steeping the tea bag or loose leaf rooibos for at least 4 minutes. You can let it steep up to 10 minutes to make a stronger tea.

It is common to add some milk and honey or sugar to enhance the flavor of rooibos tea. You can also make an excellent iced tea with rooibos.

Rooibos Tea Has Many Health Benefits

Rooibos tea has many health benefits that have been proven by research. It contains powerful antioxidants and important minerals that can make us healthier and help with many illnesses.

Here are the most important health benefits of rooibos tea:

There are two flavonoids, chrysoeriol, and quercetin, found in rooibos tea, that are good for treating allergies.

Chrysoeriol has antioxidant and anti-inflammatory properties. According to research it relieves wheezing and couching associated with allergies and asthma.

Quercetin blocks the releasing of histamine, so it works as a natural anti-histamine and prevents allergic symptoms from triggering.

May Improve Skin Health and Appearance

A study conducted in Nelson Mandela Metropolitan University in South Africa found out that rooibos tea helps with restoring the function of aged cells and thus, reduces wrinkles and makes skin look younger.

Quercetin, the earlier mentioned flavonoid, has anti-inflammatory properties that promote an increase in good cholesterol (HDL) and prevent bad cholesterol (LDL) from attaching to arteries and blood vessels.

May Help with Weight Management

There are no calories in rooibos tea and it also increases your body’s leptin levels, which makes you feel fuller for a longer time. It also reduces the formation of new fat cells and promotes faster fat metabolism.

This makes rooibos tea one of the best teas for losing weight.

There are several antispasmodic nutrients found in rooibos tea, which help with stomach pain. They have a relaxing effect on the digestion system and are capable of relieving stomach pain and cramps. In addition, the tannins in rooibos can reduce symptoms of diarrhea.

I have a habit of drinking rooibos tea before going to sleep.

It lowers your cortisol levels, which promotes better sleep. Cortisol is a stress hormone and high levels are not good for sleep. In addition, the magnesium and potassium in rooibos calm your nervous system and support melatonin production.

If you are having problems with insomnia and relaxation, check out my article about the best herbal teas for improving sleep.

The polyphenols in rooibos tea improve osteoblast activity, which supports the development of healthy bones.

In addition, a study conducted in 2014, shows that the flavonoids luteolin and orientin enhance the mineral content of bone cells.

May Help with Controlling and Preventing Diabetes

Also, aspalathin and nothofagin, antioxidants found in rooibos tea, lower the inflammation of blood vessels and arteries. This can be a major benefit for diabetics because they tend to suffer from chronic low-level inflammation that affects their insulin system.

Potential Side Effects of Rooibos Tea

In general, rooibos tea is considered safe and it has no notable side effects.

However, there are a few things worth mentioning:

I recommend that you watch this short video that does a great job in summarizing what rooibos tea is:

Introduction to Rooibos Tea, by The Chief Leaf, Tim Smith of "TheTeaSmith.com"

To sum it up, we can say that red rooibos tea is a healthy and tasty drink with an interesting history. In addition, there is also green rooibos tea which contains even more antioxidants.

Rooibos tea is safe to drink every day, even for small children. The only people who should be careful with drinking it, are people with certain diseases and/or medication.

Now that you know what red rooibos tea is, you probably want to try it out.

Read this article and find out what are my favorite rooibos tea products: Best Rooibos Tea Brands and Products.

If you have any comments or questions, please post them below.

6 thoughts on “What is Red Rooibos Tea? – History and Health Benefits”