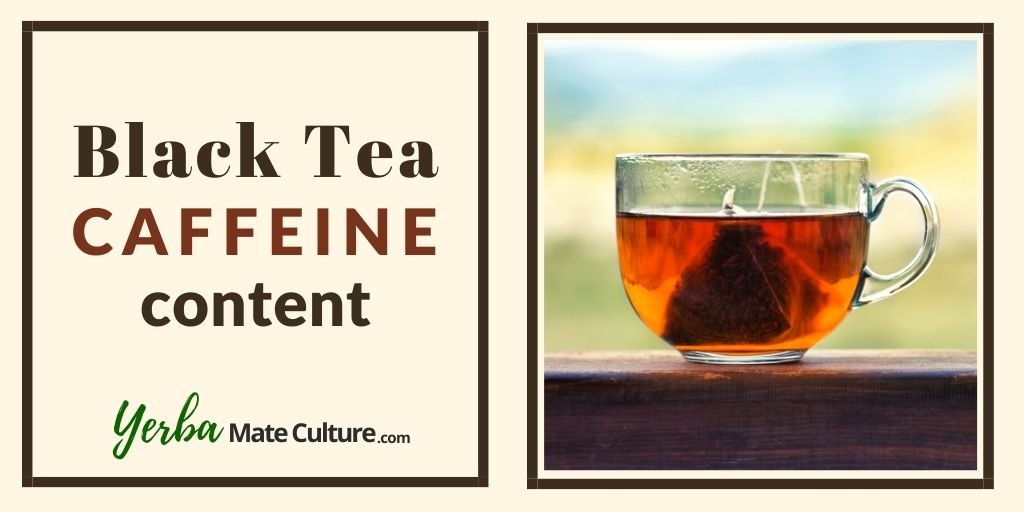 Black tea is one of the most popular drinks around the globe. In addition to having a pleasant and smooth taste, it’s a great refreshment that gives you extra energy.

It is often thought that black tea has more caffeine compared to other teas. But is it true? How much caffeine does black tea really have?

This article will explain all you need to know about black tea caffeine content and how it compares to other popular drinks like coffee and green tea.

Below is an infographic that gives you a quick glance at how much caffeine is in black tea compared to some other popular drinks:

How Much Caffeine is in Black Tea?

Unlike green and white teas, black teas are fully oxidized giving them a darker color and a deeper, more robust taste. After oxidation, the leaves are roasted or pan-fired before drying them.

According to a 2008 study, Chinese loose leaf black tea contains about 2.9% caffeine. This means that 1 gram of dry black tea has about 29 milligrams of caffeine.

The average amount of caffeine in a cup of black tea is about 50 milligrams. But it can range anywhere from 25 to 75 milligrams.

So why can there be such a big variation?

This is because the type of tea you have bought as well as how you brew it affects the caffeine content.

The amount of caffeine in your cup of tea depends on:

Ratio of Tea and Water: The more tea leaves you use for brewing a cup of tea, the more caffeine it has. When you use loose leaf tea you can easily adjust the amount to make stronger or milder tea. Of course, with teabags you can also use two bags to make one cup of extra strong tea.

Water Temperature: Black tea is usually steeped in water that is very hot, between 200 and 212 degrees Fahrenheit (93° – 100°C). This is one of the main reasons it has plenty of caffeine. But you can also use water that is a bit cooler to make a milder brew.

Steeping Time: Longer steeping times result in more caffeine being dissolved in the water. Steep for as long as 5 minutes for strong tea and only 1 minute or less for a lighter taste and less caffeine.

A study published in the Journal of Agricultural and Food Chemistry compared the caffeine levels of different types of teas. The study concludes that black tea has more caffeine than oolong tea and green tea.

The caffeine content of one cup of green tea is about 25 milligrams. However, it can range from as low as 14 milligrams up to 61 milligrams.

Thus, a cup of green tea usually has only half of the amount of caffeine compared to black tea.

The main reason for this is that green tea is processed differently and it’s also brewed in lower temperatures.

If you are wondering which tea has the most caffeine, then you should know that black is definitely in the top 5. But matcha tea and certain herbal teas can have even higher amounts of caffeine.

Does Black Tea Have More Caffeine than Coffee?

When brewed, coffee is about twice as strong as black tea as one cup of coffee has about 120 milligrams of caffeine.

This is due to the fact that about 10 grams of coffee is typically used for brewing one cup while one cup of tea only needs 2-3 grams of tea leaves to produce the best flavor.

The variation in caffeine levels of various coffee products is due to differences in arabica and robusta coffee strains and how the coffee is roasted.

The robusta variety has about twice as much caffeine compared to arabica. Also, light roasted coffee has higher caffeine levels than dark roasted.

Does all Black Tea Have Caffeine?

All tea leaves are naturally rich in caffeine, which means that black tea always has caffeine.

Unless you buy decaffeinated black tea. These teas have been processed to remove almost all caffeine but they might still have a tiny amount left depending on how they are processed.

So how much caffeine is in decaf tea? It’s usually less than 3 milligrams per cup.

The question that comes to mind first is, why would anyone want to drink black tea without caffeine?

The caffeine content of brewed black tea is not as high as in coffee, but it is still enough to cause problems for some people if they consume too much.

Caffeine is a stimulant that increases your heart rate, blood pressure, and activates the brain and nervous system. This is why a strong cup of black tea can help you with waking up in the morning and boosting energy levels during a workday.

However, if you are sensitive to caffeine, or have a pre-existing condition like high blood pressure, you might want to avoid consuming too much.

Also, drinking black tea in the evening might negatively affect your sleep quality or prevent you from falling asleep altogether.

Here are a few simple steps to make a cup of black tea with less caffeine:

You might also want to check out our article with naturally caffeine-free teas.

Knowing how much caffeine you are consuming is important. Too much can cause some unpleasant side effects like nervousness or an upset stomach. But just the right amount can give you a nice energy boost that helps you with getting things done.

And black tea is so much more than just a source of caffeine. It is a beverage with an interesting history and cultural significance in countries from China and India to England.

And did you know that in addition to drinking it you can also use black tea for sunburns?

Immerse yourself into the world of hundreds of different black teas available and experience their varying flavors. Experiment and pair your tea with matching foods and desserts that complement each other.

Check out our guide with the best Earl Grey tea brands to try something a bit different.

Have a great cup of tea and enjoy life!