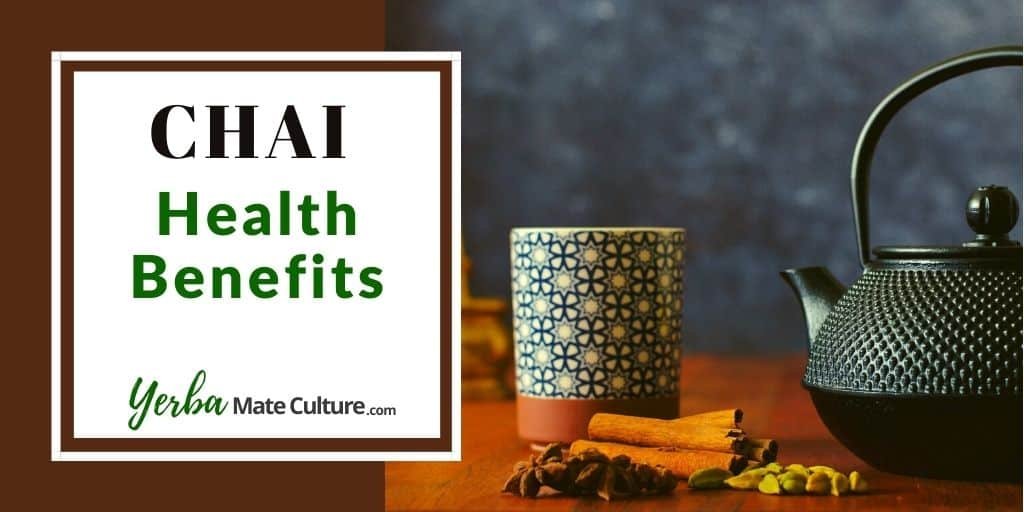 Herbs and spices have been used for centuries to make healing potions, teas, and beverages. Ancient cultures swore by their health benefits and continued to use them despite the availability of Western Medicine based on drugs and surgical treatments.

Chai is one of those mixtures of herbs and spices that is famous for its delicious taste and healing potential.

Recently, chai health benefits, from its potential in aiding with digestion to improving heart health, have been confirmed by scientific research.

“Chai” is the Hindi word for “tea”, which the Indians derived from “cha”, the Chinese word for “tea.” Chai is a popular beverage and drinking it is an integral part of Indian culture.

This tea is traditionally a mixture of brewed black tea with a dash of various spices and sweetened with sugar or honey and milk.

Assam and Darjeeling are two types of black teas popularly used as a base for chai.

Other names for the beverage include “masala chai” or “spiced tea”. Whatever name it goes by, drinking chai, with its aromatic flavors, is a pleasure for the Indians.

It is a cultural practice to sip chai at the start of the day while taking advantage of all its natural health benefits.

Chai is one of the oldest drinks in history and India’s most popular drink. In ancient India, chai was not tea but a healing potion made by brewing herbs and highly aromatic spices.

According to some historic recounts, chai was not initially brewed with tea leaves, and its recipes varied by seasons depending on the availability of the ingredients. As legend has it, chai use began more than 5000 years ago when a King ordered the creation of a healing spiced beverage for use in Ayurveda (traditional medicine).

Traditional chai ingredients include a blend of black tea and a mixture of spices (masala) such as cinnamon, cloves, ginger, cardamom, and black peppercorns. 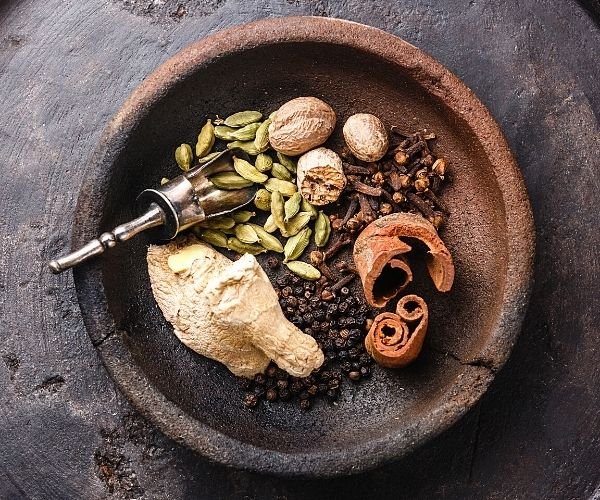 In general, the recipe varied in India across regions, cultures, and families. For example, some authentic recipes use other spices such as nutmeg, vanilla, star anise, mace, or fennel.

Today, different types of chai is available across continents, cultures, and cities, served in many coffee shops and restaurants. A version of Masala Chai also arrived in western countries. Later, a creamier version of masala chai called chai latte was born.

In addition to black tea and green tea, chai latte is sometimes made with the South African herb red rooibos or South American herb yerba mate, blended with an assortment of spices.

But newer ingredients kept finding their way in chai as it continued to move west. Some popular ones are allspice, bay leaf, saffron, cacao, cumin, and coriander.

Although chai has evolved out of Indian to the western world, you may still find herbal blends made only from a mixture of spices and no tea leaves.

Each of the traditional spices used to make chai was believed to have a unique health benefit.

For example, the heat from black pepper and ginger was believed to support digestion. Cloves were thought to relieve pain due to its antiseptic properties. Cinnamon was favored for its ability to stimulate blood circulation, cardamom for its ability to enhance mood, and star anise for its breath freshener properties.

And indeed, as you are about to find out, many of the chai health benefits have later been confirmed by research.

Combining all of these ingredients into one infusion makes for one efficient digestive tonic!

Ginger has long been established as a safe natural remedy for gastrointestinal disorders such as Gastroesophageal Reflux Disease (GERD), Irritable Bowel Syndrome (IBS), and constipation. It also helps reduce nausea and vomiting.

Piperine, the active ingredient in black pepper helps stimulate and speed up digestion. It also helps with suppressing the activities of free radicals in the body that lead to toxin buildup.

Studies were done to test the antibacterial activity of extracts of cinnamon, cloves, and cumin on methicillin-resistant Staphylococcus aureus (MRSA).

MRSA is a type of bacteria found in the upper respiratory tract and on the skin. Different concentrations of the spices were tested in the study. All three spices showed a strong potential to fight this bacterium that affects respiratory functions.

Ginger (Zingiber officinale) is a root that is known worldwide and used as a spice for foods and making tea.

Numerous studies established ginger as safe and effective for reducing nausea and vomiting related to morning sickness in pregnant women, seasickness, and chemotherapy drug treatment. A review of several of these studies found that they all favored ginger over pharmaceutical drugs for nausea and vomiting.

Another study tested the effectiveness of ginger capsules in women during the early stages of pregnancy. The researchers concluded that it is an “effective herbal remedy for decreasing nausea” as well as vomiting during pregnancy.

Furthermore, ginger can be particularly beneficial for pregnant women considering the possible harmful side effects of medicinal drugs. The herb contains powerful phytochemicals that work to soothe the digestive tract and aid digestion. This action can help to reduce feelings of nausea, especially after eating.

Muscle and joint pain can be disabling, especially if the pain is due to a chronic condition such as arthritis.

Drinking chai brewed with ginger, turmeric, and cloves may provide some relief because these three natural spices are loaded with anti-inflammatory agents.

A particular study looked at the effects of the extracts of ginger on knee pain in patients living with osteoarthritis. It was found that ginger’s anti-inflammatory and analgesic (pain-relieving) properties helped to significantly reduce symptoms of knee osteoarthritis.

Turmeric has similar joint pain-relief effects as ginger since they both come from the Zingiberaceae plant family.

I’m not surprised that clove also relieves pain as I’ve seen people place grounded cloves on their teeth to tame a toothache. As it turns out, clove is a “champion spice” and is good for muscle and joint pain due to its anesthetic and anti-inflammatory effects.

In addition, the active compound in clove called eugenol has anti-arthritic benefits and can be used as a treatment for rheumatoid arthritis.

If you’re looking to boost your immune system naturally, cardamom and turmeric might be just what you need.

First, let’s look at cardamom (Elettaria cardamomum). This Indian spice comes from seeds of various plant species and is known for its intense flavor as well as its anti-inflammatory and antibacterial effects on the body.

The flavorful spice may actually help improve immune function by regulating inflammation production in the immune system. Cardamom’s immunity effects may even be greater when it is combined with black pepper and ginger.

The active compound in the brilliant yellow spice turmeric (Curcuma longa) is known as curcumin. Curcumin is widely studied and is known for the anti-inflammatory and antibacterial protection it provides to the body. The natural compound interacts with the immune cells, such as the T and B cells, and cytokines, and prevents damage to healthy cells.

One study concluded that supplementing the diet with curcumin is a safe and natural way to enhance immune health, particularly in individuals with lowered immunity.

Of all the chai health benefits my eyes lit up when I heard that spicing up my tea with ginger and black pepper can help trim some fat off my waistline. According to scientific findings, these spices can support your weight loss goals because they contain compounds that can make you feel less hungry.

Meanwhile, the active ingredient piperine in black pepper fights fat by blocking new fat cells from forming. The upside to this is that piperine can be a potential natural treatment for fat-related disorders, according to the researchers.

Are you ready to trade in your coffee for black tea without losing the perks of caffeine? Then, chai it is!

Black tea contains caffeine and is regarded as an excellent alternative to coffee. Like coffee, it boosts energy and keeps you awake and alert. The tea also has powerful antioxidants that can help protect against cell damage and reduce LDL cholesterol.

While the black tea in your chai is busy keeping you alert, the cinnamon can protect the brain and improve brain health. Cinnamon is a spice that comes from the inner bark of different tree species from the genus Cinnamomum. It contains anti-inflammatory agents and a special antioxidant called cinnamaldehyde.

Various studies tested the effects of natural compounds in cinnamon on the brain. One study found that this spice can be a safe and effective way to treat and prevent Alzheimer’s disease onset and/or progression. Alzheimer’s is a brain disorder that interferes with thinking and memory.

Another study published in 2014 suggested that cinnamaldehyde, the active ingredient in cinnamon, has shown to stimulate brain activity and also improve insulin action in the brain.

Isn’t it interesting that you can nourish your body in so many ways by drinking a spiced tea?

Speaking of spice, let’s put cinnamon in the spotlight again. I love to sniff a cinnamon stick and can’t help sprinkling a teaspoon or two of cinnamon powder into the warm milk I drink sometimes at night before bed. I enjoy the aroma and get the benefits at the same time.

I learned from a study published in 2003 that this herbal spice can regulate blood pressure, and minimize the risk of cardiovascular diseases.

The study was done on 60 people with type 2 diabetes who consumed cinnamon each day for 40 days. The results conclude that a daily intake of 1, 3, or 6 g of the spice lower LDL cholesterol and total cholesterol in type 2 diabetics. Overall, this scented spice can improve heart health and reduce fasting glucose.

In addition, regularly consuming black tea made from Camellia sinensis has positive effects on heart health. Several studies and reviews confirmed this. For example, a 2015 review of the effects of black tea on cardiovascular health finds that it significantly lowered LDL (bad) cholesterol, especially in people at risk of heart disease.

How to Prepare Authentic Masala Chai

First, let’s take a look at the list of ingredients that you need.

Ingredients for 4 servings of Masala Chai: 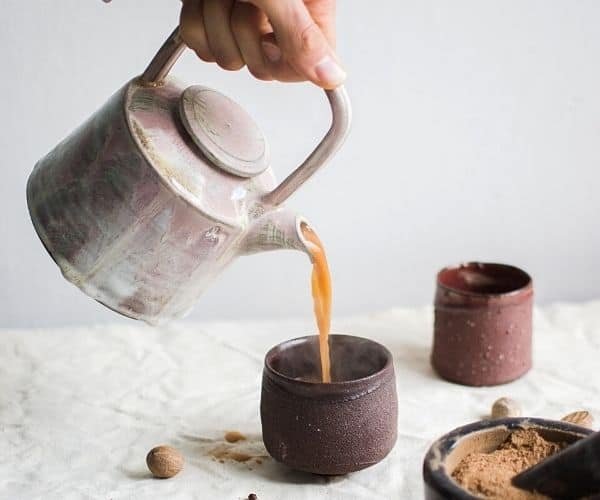 Instructions to prepare the chai:

If you want to make things a bit easier, check out my guide with ready-made chai blends.

I bet all this talk about tea made with aromatic spices is making you crave a hot cup of chai, not to mention the list of health benefits. Chai also contains a nice amount of caffeine to give you more energy.

So now it’s time to get to it.

Prepare your masala chai according to the instructions above, and enjoy the spicy-sweet taste and its many benefits! 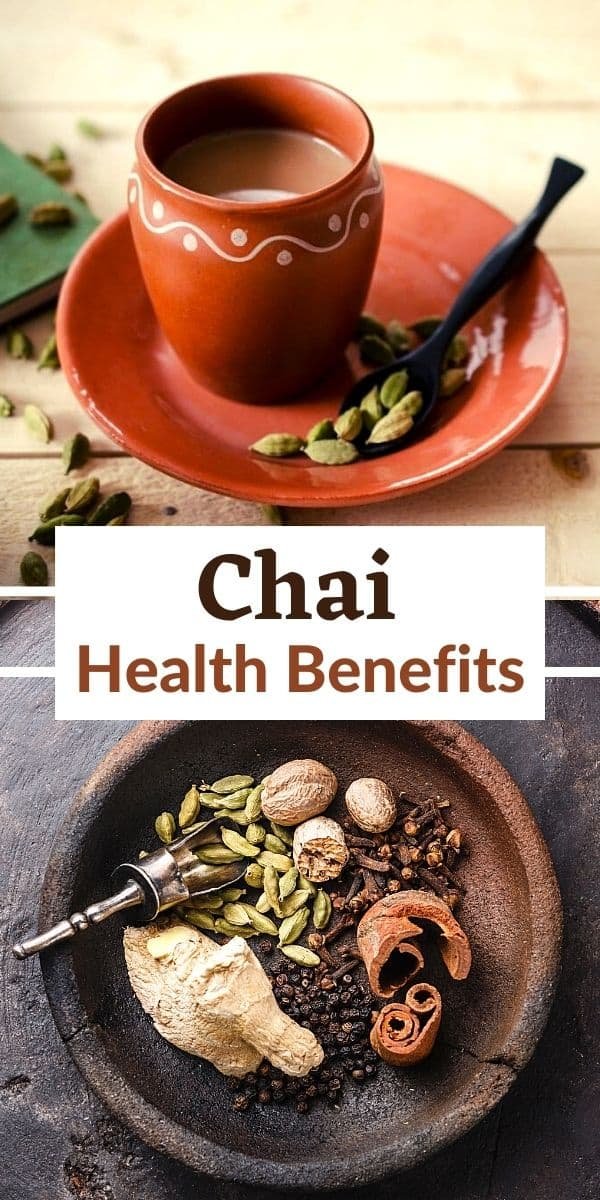