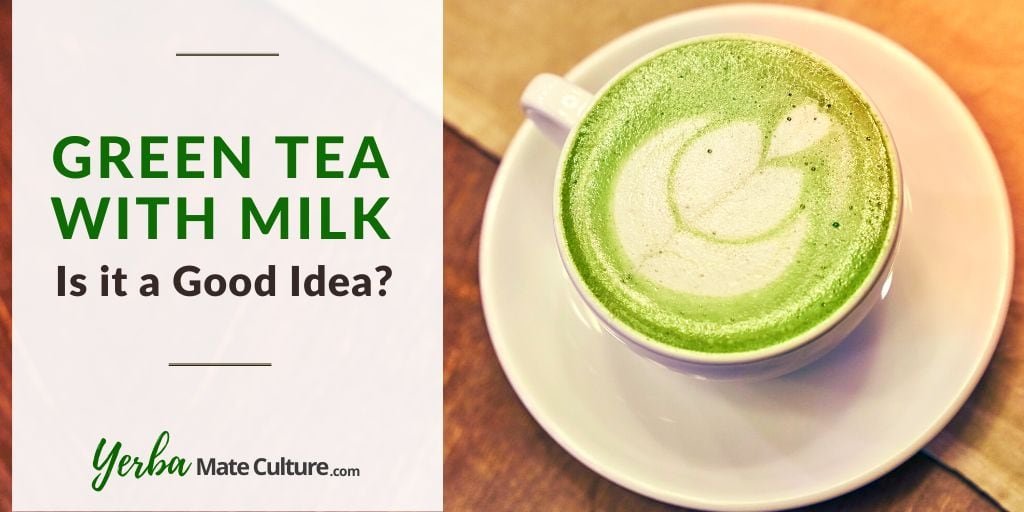 Most people scowl at the thought of milk in green tea. The grassy, earthy notes in green tea stand alone beautifully.

What’s more, the thought of diluting the jewel-like green color of pure green tea feels like a crime to many.

It’s true that traditional Chinese Xihu Longjing green tea and Dragonwell green tea are intended to be served plain. However, milk with green tea isn’t such a farfetched notion.

Look no further than the popularity of iced milk tea (boba tea) made with green tea and all of those popular matcha drinks at Starbucks. And it turns out there may actually be some health benefits to adding milk to green tea.

Keep reading to see if adding milk to green tea is a good idea and what are the possible disadvantages.

Benefits of Drinking Green Tea With Milk or Cream

There are some compelling reasons for adding a splash of milk or cream to your green tea.

While there are mixed views on the benefits of adding dairy to green tea, knowing the pros and cons is essential for any self-proclaimed tea lover.

Here are some options to combine green tea and milk:

And did you know that you can actually brew your tea with milk instead of using water.

Next, let’s take a look at why so many people are switching things up after years of going “pure green.”

Unlike some herbal tea blends, green tea doesn’t contain citrus and fruit oils that make milk curdle. Milk instead “evens out” green tea to create a creamy, velvety effect that is very similar to the way milk cuts through coffee.

Many people find that the richness and creaminess of milk actually brings out the nutty, dessert-like elements of green tea.

One of the most popular ways to combine green tea with milk are different types of iced green tea drinks. Popular all over the world, they offer a refreshing and uplifting treat on a hot and sunny day.

In fact, green tea with milk or cream may simply be a great choice in the morning if you’re the type to skip breakfast.

All of these essential vitamins and minerals are tied to better health, increased bone density, a healthy metabolism, a healthy immune system, and better cognitive health.

Bubble teas combine green tea, milk, and tapioca pearls. The pearls are made with cassava root starch are contain plenty of carbs and calories. This really is breakfast in a cup!

Look for chains like Kung Fu Tea and Gong Cha if you want to try some top-class boba tea.

There’s also a reason much deeper than nutrition for getting in the habit of using milk or cream with green tea.

It turns out that dairy in green tea may actually enhance the bioavailability of phenolic compounds called catechins that happen to be abundant in green tea.

One study that looked at the cancer-suppressing activity of tea catechins associated with casein found that casein may act as a protective carrier instead of diminishing the effect of catechins.

In addition, a study published in 2014 suggests that milk enhances intestinal absorption of green tea catechins.

Another study looking at the interaction of green tea polyphenols with dairy in a simulated gastrointestinal environment found that simultaneous consumption of green tea and dairy products helps to maintain the integrity and antioxidant activity of polyphenols during digestion.

Based on research it’s clear that drinking milk or cream with green tea isn’t harmful.

While more human studies are needed, it looks like milk actually enhances the antioxidant and protective qualities of green tea catechins.

Do milk and green tea actually go well together?

The truth is that milky green tea is an adaptation of traditional green tea. Most high-quality Chinese and Japanese green teas are intended to be enjoyed without adding anything.

That means you might get some strange looks if you ask for milk in your green tea when ordering at a tea house.

Of course, adding milk to green tea isn’t a good idea for anyone who suffers from lactose intolerance.

The catechins and antioxidants in green tea will not override the effects of the lactose in dairy products. Thus, anyone with sensitivity to dairy is truly drinking at their own risk when mixing green tea with milk or cream.

However, many plant-based milk substitutes do a good job of recreating the rich, thick texture that true dairy brings to green tea. Oat milk and soy milk are popular options while almond, coconut, and cashew milk also work great.

While green tea may be acceptable during intermittent fasting, green tea with dairy breaks a fast. If you’re on a special diet for heart health, weight management, or diabetes management, it’s important to remember that milk and cream both contain fat, cholesterol, carbohydrates, and natural sugars.

Is Drinking Green Tea With Milk a Good Idea?

The answer really comes down to your taste perspective.

Generally, milk and cream will taste better in a rich, high-quality green tea that won’t become masked or dulled when it’s diluted with dairy. Matcha is an especially good fit for milk and cream because of its flavor density.

However, the best loose leaf green teas are often supposed to be enjoyed plain without any additives.

There are some quick tips to know about when having green tea with milk or cream for the first time.

First, steep the tea a little bit longer to make a stronger tea. This will help to offset the dilution caused by milk or cream. If you’re using loose tea, simply add more tea.

The second tip is to make the tea slightly hotter than usual. This helps your cup of tea maintain its temperature after cold milk has been added.

Finally, remember that “a drop will do.” A single splash of milk or cream might be enough to take the edge off of green tea without turning it into a pale-green shade.