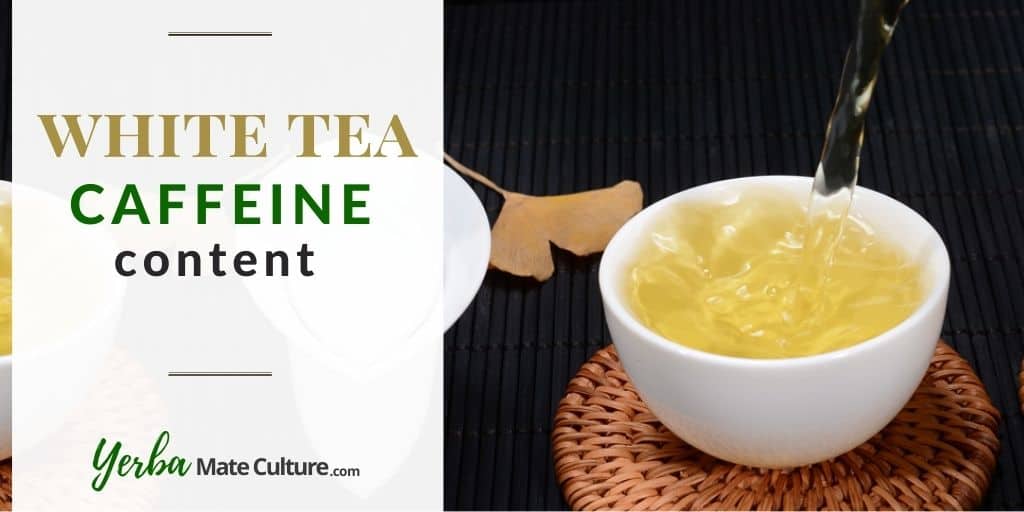 For centuries, tea has been an important part of cultures around the world. From growing to picking and from brewing to drinking, entire countries have experienced it in one way or another.

Thanks to the many varieties of tea available for consumption, there is always something new to try and experiment with. The act of selecting a tea to drink is extremely rewarding because of the various flavors and numerous health benefits that they can provide us with.

White tea, with its exquisite flavor, is one of the lesser-known teas because of its expense.

This article will explain the basics of white tea and all you need to know about its caffeine content.

Below is a chart with a comparison of the caffeine content of black tea, oolong tea, green tea, white tea, and coffee:

As you can see the caffeine content of white tea vs green tea does not have much difference. Note that these are only averages and the amount of caffeine per cup for each beverage can vary greatly.

Some varieties of white tea, like White Hair Silver Needle Tea, can have as much as 50 to 60 milligrams of caffeine per cup.

The main factors that affect the amount of caffeine in each tea are the type and amount of product used, brewing time, and water temperature used for brewing.

Check out our guide with the best white brands to find a nice product to try.

What Exactly is White Tea?

Originating from a shrub known as the Camellia Sinensis (or the tea plant), white tea is minimally processed. Its flavor is delicate, and it’s subject to a very careful growing process.

Harvesters use the same care when picking and selecting the tea. It is mild in flavor and not as astringent as black or green tea.

Among many types of Chinese teas, white tea is considered the one with the highest concentration of antioxidants.

Here is a short video with the most important facts about white tea:

He insisted on boiling it, and in the process, a single white tea leaf blew into his hot water creating a delightful drink enjoyed by China’s Song Dynasty for many years.

The grinding of silvery leaves in bowls became what is known as the Song Tea Ceremony. It also inspired Japan’s famous tea ceremony.

The birth of white tea can be traced to Fujian Province, China. Most of it is grown in the three Province counties of Fuding, Jianyang, and Zhenghe.

Other regions of China also produce white tea as do countries such as Sri Lanka, India, Thailand, and Nepal.

Today, tea is highly regarded throughout many countries and cultures and remains one of the most widely drank beverages in the world.

How White Tea is Made

White tea’s origins typically stem from the Fujian Province mountains, where the tea buds and leaves get picked in early spring. They’re fast to wither, so they must be dried naturally by air or an oven to prevent oxidation from occurring.

The tea’s texture is fluffy because it’s not twisted into other shapes the way green tea and other tea varieties are by harvesters.

After the tea leaves are picked and dried or wilted, they are then packaged for consumption. Some varieties are dried indoors, while others are dried in the sun to preserve the leaves’ flavor.

The processing of the tea is as important as the preparation of it at home.

How Does White Tea Taste?

It can be described as subtle, clean, and fresh with notes of honey, chestnuts, peaches, and apricots.

The taste of white tea varies greatly depending on the type and brand of the tea.

It’s extremely rare because of the difficult process it undergoes, so it’s much more expensive than other tea varieties.

How to Brew It?

The brewing process from start to finish typically takes 3 to 5 minutes with a water temperature of 175 degrees Fahrenheit (79°C).

You’ll know that the white tea is ready to consume when it turns pale yellow or light orange.

One of the best ways to brew your white tea is to use an authentic Chinese Yixing clay teapot.

The fluffier consistency of the tea makes the brewing time longer. It’s also important to cover the teapot or mug after pouring the hot water over the white tea so it remains hot enough for proper steeping.

Now it’s time to dig deep into the topic of caffeine in white tea.

Let’s start by addressing the claim that white tea is low in caffeine.

Myth: White is Low in Caffeine

This is something you might have heard quite often.

The truth is that different varieties of white tea come with a wide range of caffeine content. It’s important to know which are high and which are low in caffeine so that you can choose what you drink wisely.

There is no such thing as entirely caffeine-free white tea. But some varieties might only have 10 to 15 milligrams of caffeine per cup depending on how you brew it (more about this later).

One thing is for sure — white tea has far less caffeine per cup than coffee. Anyone looking to reduce their caffeine intake while still benefitting from the inclusion of antioxidants in their diet finds white tea to be a very good option.

You can find the most important factors that affect the amount of caffeine in white tea below:

Variety of Tea Plant: The type of white tea plant chosen also determines how much caffeine the tea contains. Some have greater caffeine to theanine ratio than others. It’s considered the natural decaffeination process that Mother Nature provides.

Age of Tea Leaves: Young tea leaves that are higher on the plant tend to have higher caffeine levels than mature tea leaves. That’s why harvesters pick them during the earlier stages of growth. It makes a more caffeinated beverage overall.

Processing: Some white teas are roasted to stop oxidization. In this case, the caffeine content will be lower compared to products that are steamed to stop the oxidation.

How You Brew It: The water temperature, amount of tea leaves, and the length you steep the tea greatly affect its caffeine content. More leaves, hot water, and long brewing time result in a stronger taste and more caffeine.

So How Much Caffeine is in White Tea?

Taking all previous facts into account, the amount of caffeine per cup of white tea can be anywhere between 10 and 60 milligrams.

We chose 4 popular types of white tea to be introduced here.

For each, we will tell you about the flavor of the tea and the amount of caffeine it contains. That way you can choose a variety that best suits your needs.

White peony tea is among the most popular varieties because of its bright floral scent. It has a fruity flavor and silvery down that covers it.

This variety of white tea has less caffeine compared to Silver Needle but it’s still quite high compared to many other white teas.

Among the most expensive varieties of white tea, silver needle contains no stems or leaves. It’s only the closed buds of the plant that are silvery in color.

Because silver needle tea is made with pure young tea buds it has a relatively high caffeine content.

Harvesters pick Long Life Eyebrow tea after other white tea varieties. It’s darker in color and has a richer flavor.

Its unique shape resembles an eyebrow, hence its unusual name.

As the leaves are a bit older, the caffeine content of this variety is quite low.

Try this superb aged Shou Mei white tea that has a subtle flavor. You can even have a relaxing cup late in the evening without worries.

Moonlight white is dried slowly in the sun. The result is a sweeter tasting tea overall.

It’s close in flavor to black tea by the time the leaves have dried completely.

We recommend Teamotea White Moonlight Yue Guang Bai with sweet notes of honey and fruits. It has a moderate amount of caffeine.

White tea is one of the many varieties of tea people enjoy regularly. Although it isn’t as common as black or green teas, it’s definitely worth trying.

Many people believe white tea to be very low in caffeine which isn’t necessarily the case.

The longer you brew it, the more caffeine the leaves release. And the leaves can be steeped up to 3 times before disposing of them. Each brew contains less caffeine than the previous one.

The price of white tea is often what deters people from consuming large quantities of it. It’s much rarer than other varieties of tea, making the demand for it higher.

The best white teas are a treat for your taste buds. And you don’t have to worry about jitters that you might get from a strong cup of coffee.