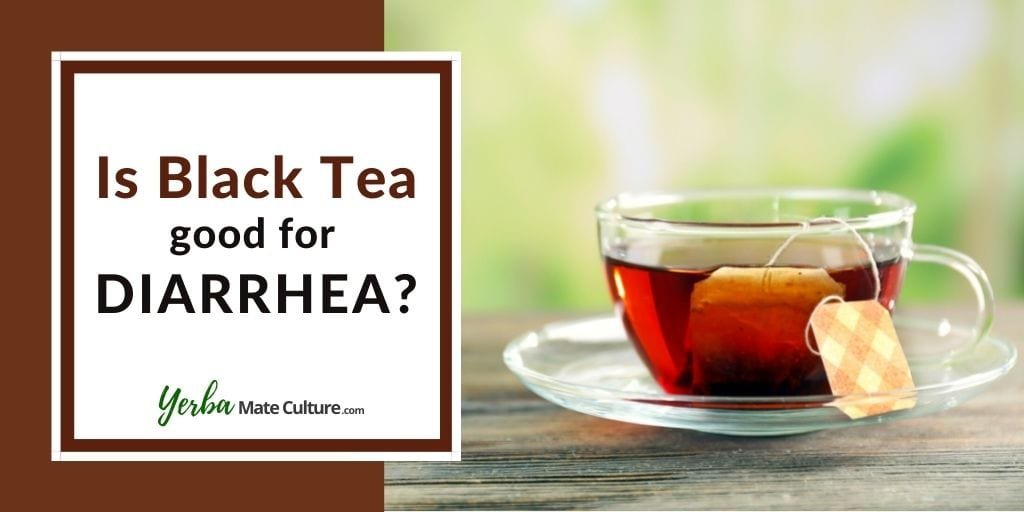 Whether it’s a quick bout of the “stomach flu” or an ongoing issue, diarrhea limits you to within a few feet of a bathroom. You never know when it will strike.

If it lasts longer than three days or is accompanied by a high fever, call your doctor. But home remedies are a popular self-care choice for occasional loose stool or upset stomach that doctors can’t fix.

Staying hydrated and minimizing the symptoms will help you feel comfortable at work or play. A cup of black tea may help you do both.

Thus, using tea for diarrhea is one of the safest and most effective home remedies, and I recommend trying it.

In order to understand how drinking black tea can ease your diarrhea, let’s first discuss what causes it in the first place.

Diarrhea is loose, watery stool. A common condition, it happens to everyone once in a while.

Most often caused by a digestive issue or viral infection, it usually resolves in a few days with a little TLC.

But some people have persistent diarrhea because of medical conditions from allergies to autoimmune diseases. And it can be dietary or idiopathic — meaning the cause is unknown.

Symptoms may also include:

So, regardless of why you have watery stool, the effects are challenging to manage.

The most common causes of diarrhea are:

Viruses: Dozens of highly transmissible viruses cause diarrhea. Norovirus outbreaks, for example, are common on cruise ships and in schools and nursing facilities. Rotavirus is endemic where water sanitation is poor. It causes millions of deaths annually worldwide.

Medicines: Antibiotics and chemotherapy drugs may trigger diarrhea by wiping out the good bacteria in your gut — radiation treatments have a similar effect. And taking too many magnesium-containing antacids has an osmotic effect, meaning that it pulls water out of your intestinal tract and adds it to your stool.

Artificial Sweeteners: Excessive consumption of sorbitol and mannitol, artificial sweeteners found in sugar-free foods, can cause loose bowel movements. Erythritol and xylitol are less likely to be problematic.

Lactose and Fructose Intolerance: Lactose is a type of natural sugar found in dairy products. It can cause diarrhea in all age groups, but it’s more likely in adults. Production of lactase, the enzyme that digests lactose, diminishes as we age. Similarly, fructose is a sugar found in fruits and honey and is difficult for some people to digest.

Less common causes of diarrhea include:

Autoimmune Disorders: Autoimmune disorders are conditions in which the body attacks its own cells as foreign invaders. Examples include Irritable Bowel Syndrome (IBS), Crohn’s disease and ulcerative colitis.

Alcohol Use: Alcohol is a GI irritant, so no matter how much or how little you drink, it can cause diarrhea and ulcers.

Parasites: Parasites, such as giardia are found in untreated water. The chlorine in municipal water supplies kills most cysts.

Surgery: Eating too much high-fat food is a recipe for diarrhea if you’ve had your gallbladder removed. Weight loss procedures such as gastric bypass may have similar long-term effects.

How Black Tea Can Help?

While there are medications you can take to ease temporary diarrhea, few are recommended for more than three days.

One thing that experts agree on is that replenishing lost body fluids is critical. Juices can make diarrhea worse, but water, soup, and black tea are good choices.

But black tea also has some healing abilities beyond hydrating your body:

In animals, it’s been shown to enhance electrolyte reabsorption. Human studies suggest that it protects the gastrointestinal tract from environmental stress.

Black tea also tames discomfort by reducing the sensitivity of visceral nerve endings in the intestines.

And the same polyphenols that decrease inflammation also have an immunological effect supporting beneficial gut bacteria. UCLA researchers recently discovered that the polyphenols in black tea aren’t absorbed as quickly as those in green tea, so they have a more direct effect on the intestinal tract.

In addition, fermented black teas like kombucha or pu-erh tea may be as beneficial as yogurt for balancing your microbiome and controlling diarrhea, whatever the cause.

How About Other Teas?

When I have diarrhea, I usually make a blend of black tea and some herbal ingredients for maximum effect.

And why not add some peppermint as well?

It gives a nice fresh flavor and is good for improving digestion.

Can Black Tea Cause Diarrhea?

Drinking too much black tea can actually make you poop even more. This is mainly because it contains caffeine, which has some laxative effects.

How much caffeine is in black tea depends on the type of tea you use and how you brew it. Also, some people are more sensitive to caffeine than others.

Try not to drink more than three cups per day to avoid making your diarrhea worse.

Hot or iced, black tea is a delicious and nutritious addition to your kitchen cupboards and medicine cabinet.

If you have diarrhea, I recommend you try drinking some black tea. You can also mix it with chamomile, ginger, and peppermint — this blend is my favorite for settling an upset stomach!

Enjoy your tea and stay healthy!