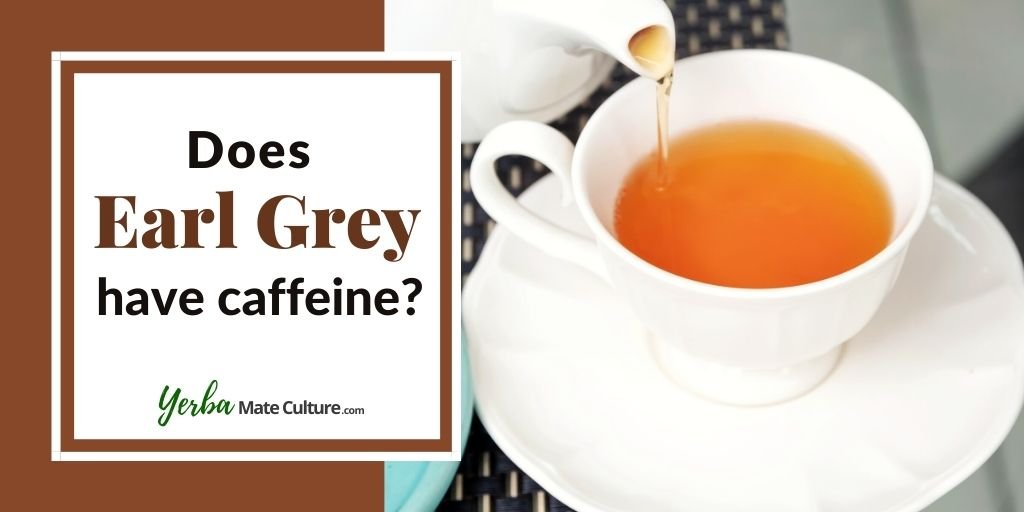 We all love Earl Grey tea for its unique taste and uplifting effect. Often called “the prince of tea” it’s one of the most popular teas in the world.

But maybe you are wondering if it contains any caffeine? Or how to adjust the caffeine level to suit your personal preference?

This guide will explain all you want to know about Earl Grey tea caffeine content, why it can vary a lot, and what factors affect it.

Take a look at this infographic to have an idea about how much caffeine is in an Earl Grey black tea compared to some other popular drinks:

Note: The infographic above presents estimates of caffeine per cup or can. If you brew a cup at home, the caffeine content can vary greatly as explained later in this article.

What is Earl Grey Tea?

Earl Grey tea is a type of black tea that is flavored with the oil of Bergamot orange. The history of this tea is a bit obscure but it’s probably named after the 2nd Earl Grey, who served as Prime Minister of Britain in the 1830s.

One of the most popular types of black teas, Earl Grey has an intriguing taste combining the brisk earthiness of black tea with fresh citrusy notes. It is often served with milk and sugar, but it can also be made with lemon and honey.

Earl Grey tea is made by flavoring black tea leaves with oil derived from the peel of Bergamot oranges. The best brands use only natural oils, while cheaper products may contain artificial flavorings.

Earl Grey tea benefits are a combination of the healthy compounds of black tea and vitamin C and D-Limonene of the Bergamot fruit.

The exact process of making Earl Grey is a closely guarded secret of each brand that produces it.

Does Earl Grey Tea Have Caffeine?

Yes, Earl Grey tea has caffeine as it is traditionally made with black tea that is flavored with Bergamot.

A typical cup of black tea has about 50 mg of caffeine per cup, which also applies to Earl Grey tea.

However, there are many factors that affect the caffeine content of black tea and it can range anywhere from 25 to 75 milligrams.

There are also are other types of Earl Grey teas available. For example, Earl Grey Green is made with green tea and Red Earl Grey is made with rooibos. Green teas usually have less caffeine than black tea and rooibos is a naturally caffeine-free herbal tea.

There are three main factors that affect the caffeine content:

Type of Tea: There are actually two different varieties of the tea plant. The Assam variety usually has more caffeine compared to the Chinese variety. The amount of caffeine in your cup of Earl Grey largely depends on what variety of black tea (or other type of tea) it contains and how and where it was grown.

Amount of Tea Per Cup: The more tea leaves you use per one cup of water the stronger your tea will taste and the more caffeine it will have.

Steeping Time: Steeping your tea longer allows more caffeine to be dissolved into the water and can increase the caffeine content by as much as 50 percent according to a 2008 study.

Note that many brands make their Earl Grey by blending several black teas, which makes it harder to estimate the caffeine content.

Sometimes Bergamot peel is also mixed into the tea. This will lower the overall amount of caffeine per gram of loose leaf tea since the Bergamot peel doesn’t contain caffeine.

How to Make a Perfect Cup of Earl Grey Tea

The most important thing for brewing a great cup is, of course, the tea. We recommend using high-quality loose leaf tea but there are also some good tea bags available.

VAHDAM’s signature Earl Grey is made by mixing some of the finest Indian black teas and flavoring them with natural Bergamot oil. The tea is shipped in a 16-ounce vacuum-sealed bag enough for at least 200 cups.

Order directly from VAHDAM to get your tea fresh and for the best price:

Check out our guide with the best Earl Grey brands for more options.

For the best result, use water that has a neutral pH and relatively low mineral content. Fresh spring water is the best option but tap water in most areas will also do just fine.

Here is how to brew a cup of Earl Grey:

Brew your loose leaf tea in a stylish glass teapot with an infuser and watch the leaves release their color while they are steeping in the hot water.

How to Make a Cup of Earl Grey With a Lot of Caffeine?

Ok, so let’s say you feel a bit tired and are looking for a proper energy boost to wake you up in the morning or keep you working for a few more hours.

Choose a strong Earl Grey made with black Assam tea like this Classic Earl Grey from Teabox.

Use two teaspoons of tea leaves and brew a large 10 oz cup by steeping the leaves for 4 to 5 minutes.

This will make a strong tea with plenty of caffeine!

How to Brew Earl Grey Tea with Less Caffeine?

There might be times when you want to reduce your caffeine intake.

Maybe you are sensitive to caffeine or it’s getting late and you don’t want to ruin your sleep but you still want to enjoy a refreshing cup of Earl Grey.

Then it might be a perfect time to pick a lighter variety like this Maharaja Earl Grey Oolong Tea from VAHDAM. Besides having less caffeine it also has a lighter taste and pleasantly sweet floral aroma.

Use one teaspoon per cup of water and steep the tea for only about 2 minutes for a cup with less caffeine.

A cup of coffee usually has about 100 milligrams of caffeine, while a cup of Earl Grey has about 50 milligrams. But the caffeine content of both beverages can vary greatly depending on the type of product you use and how you brew it.

So on average, a cup of coffee has about twice as much caffeine compared to Earl Grey tea.

Next, let’s take a look at the caffeine content of some of the most popular Earl Grey tea brands.

The 2008 study related to tea steeping times and the amount of caffeine (mentioned earlier in this guide) included Twinings Earl Grey. This provides us with very accurate information about its caffeine content.

According to the study, a 6-ounce cup of Twinings Earl Grey has 29 milligrams of caffeine when steeped for 5 minutes.

According to the study, a 6-ounce cup of Tazo Earl Grey tea contains 59 milligrams of caffeine when steeped for 5 minutes.

So it looks like the Tazo Earl Grey is a much stronger blend compared to Twinings — it has about twice as much caffeine!

A 6-ounce cup of Stash Earl Grey Black tea has 47 milligrams of caffeine if steeped for 5 minutes.

With a 3-minute steeping time, it has 41 milligrams of caffeine and 24 milligrams when steeped for only 1 minute.

Stash seems to be of medium strength caffeine in the world of Earl Grey teas.

There is no accurate measurement data on the caffeine content of Bigelow Earl Grey tea. The only information available is on their website, and it says the amount of caffeine is 30 to 60 milligrams per cup.

Unfortunately, there is no information available related to the caffeine content of Trader Joe’s Earl Grey tea. Thus, we can only assume that it has about 30 to 60 milligrams of caffeine per cup.

Yes, if you are sensitive to caffeine and drink Earl Grey tea in the evening it can increase your energy levels and prevent you from falling asleep.

Does Earl Grey have more caffeine than green tea?

However, this greatly depends on the exact type of tea you are using and how you brew it. And to make things more interesting there are also Earl Grey green teas available in the market.

Is it okay to drink Earl Grey tea every day?

Earl Grey tea is a healthy and flavorful beverage that can be enjoyed daily.

Yet, you should note that consuming excessive amounts of caffeine is not good as it can cause jitteriness and anxiety. Also, be careful about caffeine consumption if you are pregnant or breastfeeding.

How much caffeine is in one cup of Earl Grey tea?

One 8 oz cup of Earl Grey tea has about 50 mg of caffeine on average. This is about half the amount of a cup of coffee.

However, the caffeine content can vary anywhere between 25 and 75 milligrams depending on what brand of tea you use and how you prepare it.

So here is all you need to know about Earl Grey tea and caffeine!

In my experience, most Earl Grey teas have just the right amount of caffeine to give you a nice energy boost but not too much to make you jittery — even if you have two cups.

Did you know that drinking tea in the morning has many benefits even if it doesn’t have a lot of caffeine?

That’s one of the reasons why having a cup of Earl Grey with your breakfast is a great way to start the day!

Enjoy Your Tea, and Life!