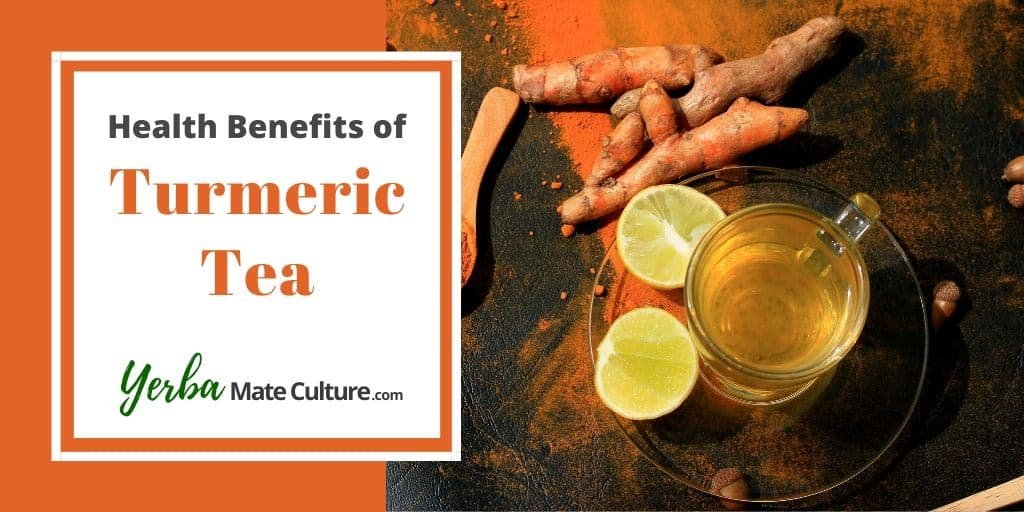 Turmeric tea is a delicious herbal beverage that offers a variety of health benefits. You have probably heard people say that turmeric is good for you. Let’s take a closer look to find out exactly what benefits it provides.

I often buy and use fresh or ground (powdered) turmeric to make tea and add flavor to various dishes. Not just because of the health benefits that it provides, but also for the taste.

If you want to make things easy, you can just buy this excellent ready-made turmeric ginger tea from Buddha Teas.

In addition to tea, I often use this culinary spice to add a unique flavor to my smoothies, steamed veggies, stews, and curries. I have to say, though, when I first started studying its health benefits, it was surprising how many there are.

This tea truly is like herbal medicine in a cup. Drinking it regularly can boost the immune system and help fight off common diseases such as arthritis and cancer.

Turmeric (Curcuma longa L) is a root vegetable of a flowering plant that falls into the ginger family. It has a unique yellow-orange color and is nicknamed the Golden Spice. You can use the fresh root or powdered spice as an additive in a variety of ways.

The history of turmeric use dates back almost 4000 years to the Vedic culture in India. It was used as a culinary spice, and for religious and medicinal purposes as well.

One of the most popular forms of consuming turmeric is to make golden milk. This traditional remedy tastes delicious and it is one of my favorite herbal drinks.

Today, the spice is widely used in many Asian countries such as China, and also in West Africa, and the Caribbean.

The main active compound in this powerful herb is curcumin, one of many curcuminoids found in turmeric.

In fact, various studies show that curcumin has powerful anti-inflammatory and anti-oxidant effects that benefit the body and brain.

So, as you sip your turmeric tea, keep in mind that it may improve your health in different ways.

However, there is one major problem related to this ingredient – its low bioavailability. This means the body has a hard time extracting the compound from the food or drink and absorbing it.

Although curcumin is the most important and researched beneficial compound in turmeric, the other curcuminoids and essential oil could also have some health effects.

Arthritis is a degenerative disease that develops due to chronic inflammation of the joints. Osteoarthritis and rheumatoid arthritis are the two most common types.

People living with chronic arthritis constantly experience symptoms that include:

Medication and physical therapy are commonly used to treat the condition, but there is no cure.

However, turmeric tea has anti-inflammatory and anti-oxidative properties that can help with treating arthritis symptoms or flareups.

In fact, a publication by the National Institutes of Health suggested that turmeric is a potential alternative medicine for arthritis.

Inflammation is naturally produced by the body and helps the immune system fight off bacteria and other foreign substances that enter the body. In people with arthritis, this process is not working properly which leads to an overproduction of inflammation.

Turmeric seems to have the ability to inhibit the formation of inflammation in the body.

Tumeric tea has shown potential as a therapeutic agent for cancer.

A study from 2014 examined the anticancer effects of curcumin against a variety of tumors, and pancreatic cancer in particular. The study found that curcumin has promising anticancer qualities used on its own or in combination with anticancer drugs.

Lab and animal research suggests that curcumin may not only prevent cancer, but it may also slow the spread of cancer and increase the effectiveness of chemotherapy. In addition, it has the ability to prevent radiation therapy from damaging healthy cells.

While these are promising findings, research is still in its early stages when it comes to curcumin and turmeric tea for cancer. One of the main challenges of using turmeric as herbal medicine is the low level of curcumin it contains.

For example, pure turmeric powder has an average of 3.14% of curcumin by weight. Because of this, researchers are still assessing the effectiveness of curcumin in turmeric and curry powders in the treatment of cancer.

Highly bioavailable forms of curcumin are being developed to solve this problem. The aim is to induce higher plasma curcumin levels without increased toxicity.

As you enjoy the therapeutic taste of turmeric tea, remember that it also has the potential to boost your immunity.

In short, the immune system is your body’s defense against infections and diseases. It works by fighting off pathogens such as bacteria, viruses, and fungi that invade the body.

So how can spicing up your foods with turmeric or drinking turmeric tea help the immune system?

First off, curcumin is well-known for its anti-inflammatory effects. It is also a potent agent that can influence the activation of the immune cells and help them protect the body against infectious microorganisms. Interestingly, low doses of curcumin can also enhance antibody responses.

In addition, turmeric tea is also a good source of antioxidants. Antioxidants are “free-radical scavengers” that help prevent or minimize damage to important cells in the body. Based on these findings, researchers see promise in exploring the use of turmeric as a therapy for immune disorders.

Alzheimer’s Disease is a neurodegenerative disorder that develops mostly in senior adults and can eventually lead to dementia. It happens due to damage and degeneration of brain cells responsible for cognitive functions such as thinking, reasoning, and memory.

People with Alzheimer’s experience a lowered quality of life because of memory loss and trouble with thinking. This is caused by free radicals that attack the brain cells.

A study published in 2013 explored the neuroprotective property of curcumin and found that the antioxidants it contains can counteract the negative effects of oxidative stress.  According to this study, curcumin can also help with preventing or slowing aging-associated changes in brain cell proteins that lead to the onset and progression of Alzheimer’s.

Turmeric tea health benefits extend to the liver and gallbladder. These organs are located closely together in the body and aid the digestion of solids and liquids.

It increases antioxidant effects and can, therefore, protect against liver damage or liver disease. It does so by increasing the production of bile, a digestive fluid secreted by the liver and stored in the gallbladder.

Curcumin protects the liver mainly by reducing hepatic oxidative stress as seen in tests done on rats. The curcuminoid may also help with protecting us against gallstones (hardened bile). Gallstones can block your bile ducts and trigger gallbladder attack.

Turmeric has long been used in traditional medicines as a treatment for various digestive disorders, and irritable bowel syndrome (IBS) is one of them. IBS symptoms are discomforting and include bloating, constipation, diarrhea, and abdominal pain.

In severe cases, IBS can be disabling and reduce a person’s quality of life. Perhaps a cup of warm turmeric tea on a regular basis could help ease the symptoms?

I have been suffering from IBS for over 10 years and have found that herbal teas, mainly turmeric and ginger, are a great help with this condition.

So that’s just based on my own experience, but is there any research to support this?

Scientific evidence indicates that the anti-inflammatory effects of curcumin can lower the hypersensitivity of the bowel.

The results of a study with 500 volunteers who were given standardized turmeric extract found that abdominal pain/discomfort score lowered significantly by 22% and 25% respectively.

Side Effects of Turmeric Tea

Despite many studies find turmeric is safe for use, there are some potential side effects. These side effects are very rare and generally only occur when huge amounts are ingested.

The possible side effects of excessive amounts of turmeric include:

However, you don’t have to worry about these side effects if you are drinking a few cups of turmeric tea daily and adding some turmeric powder to your dishes.

If you have any serious medical conditions, you should talk with your doctor before using turmeric tea or any other herb for therapeutic purposes.

Your doctor can also provide information on the possible interaction of curcumin with certain drugs you are taking or plan to take.

Tumeric tea is not only tasty, but it is also packed with anti-inflammatory and antioxidant agents that can benefit the body without the harmful side effects of medication. However, research on turmeric as natural medicine is still ongoing to determine its full range of benefits and side effects.

Based on the current knowledge we can already say that drinking turmeric tea can provide us with many health benefits.

To make your cup of tasty tea, you can either use fresh turmeric root or buy one of the turmeric tea products introduced in this article.

Please share your thought about turmeric tea health benefits in the comments section below.