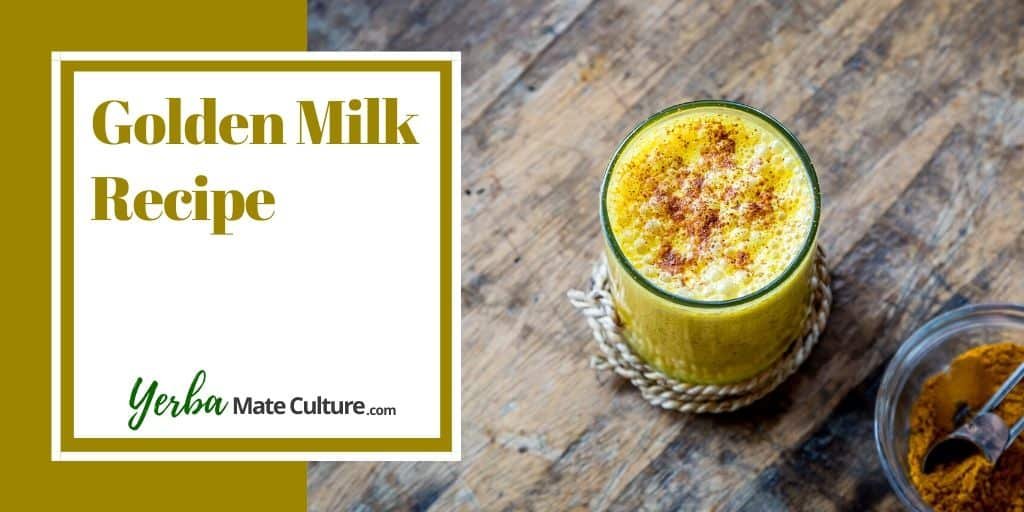 Maybe you have heard about a healthy drink called golden milk, or haldi doodh in Hindi. Perhaps even tried it. And now you want to learn how to make it at home?

Yes, this is the right place, let’s start!

Try this golden milk recipe and feel its health-improving effects. Or just enjoy the delicious and spicy taste.

Turmeric tea made with milk is a traditional ayurvedic remedy that is still very commonly used in India. It is easy to make and has many proven health benefits.

I love herbal teas and often experiment with different types of herbs and ingredients. After making golden milk years ago, it instantly became one of my favorite beverages.

There are many ways to make this fulfilling and healthy drink. Here is my favorite one!

Turmeric is a healthy herb that has an important role in Indian culture and ayurvedic medicine. For thousands of years, it has been used to cure various illnesses and as part of ceremonies.

One example is the traditional Hindu wedding ceremony where a special herbal mixture that contains turmeric is applied to the bride’s skin.

Golden milk is a traditional Indian drink that has been used as a remedy for anything from cough and fever to more serious conditions like cancer. Before the time of pharmacies and paracetamol, if a child was sick, golden milk was what mothers would most often give them.

Even today, with pain killers and other commonly available drugs, golden milk is one of the most popular homemade remedies in many Asian countries.

The basic version includes just raw cow’s milk and turmeric, but over time it has evolved into different variations.

More recently, this Ayurvedic herbal tea has become very popular in western countries as well. In 2016 it suddenly became so popular that many cafes in the US and Europe started selling it and big newspapers like the Guardian published articles about it.

Turmeric (haldi) and milk (doodh) are ingredients often used in Indian cuisine, and these two components form the base of golden milk. Either cow’s milk or plant-based milk can be used for making this drink.

Masala means spice mixture in Hindi, and as this recipe includes various spices in addition to turmeric, let’s call it masala haldi doodh.

The combination of these ingredients produces a rich tasting and fulfilling drink, that is not only delicious but offers many health benefits. The people in India recognized these benefits thousands of years ago and now they have been backed by scientific research.

Next, let’s take a closer look at the ingredients of golden milk:

Turmeric root is known for its unique yellowish-orange color and powerful antibacterial and anti-inflammatory properties. You can use grated fresh turmeric or turmeric powder for making golden milk.

Check out this guide for turmeric teas and products to find my favorite organic turmeric powder.

The main active compound of turmeric is curcumin. It has many science-backed health benefits and is proven to be effective in boosting our immunity and in the treatment of many diseases including digestive problems (such as IBS), arthritis, cancer, and Alzheimer’s Disease.

Ginger is also an important ingredient in golden milk. Fresh ginger root adds some warm spiciness and is super healthy as well.

Ginger root contains gingerols and shogaols that have anticancer, antioxidant, antimicrobial, anti-inflammatory, and anti-allergic properties. It is a great natural remedy for nausea, colds, and cough. In addition, it helps with digestion and reduces pain and stiffness in joints. It is also one of the best teas for inflammation.

You can basically use any kind of milk for this recipe. It completely depends on your taste preference and if you want it to be vegan or prefer to use dairy.

Dairy: Fresh, full-fat cow’s milk is the traditional choice for making golden milk. So if you are going to use dairy, I recommend organic whole milk. You can also use low-fat milk, but the taste will not be as rich and fulfilling.

Plant-based: When you want to make vegan golden milk (or should I say mylk), you have a variety of options. I think cashew, almond, and coconut milk are the best ones. But why not go for soy or oat milk if you wish to do so.

My favorite option is to use homemade nut milk.

Here is a 2-minute video that shows you how to make cashew milk:

I always like to add some cinnamon to my golden milk. It really gives a nice savory and aromatic touch to the drink.

Cinnamon also provides some additional health benefits as it is loaded with antioxidants and anti-inflammatory compounds.

Black pepper is an important part of golden milk. It adds some kick but also has another function.

The piperine in black pepper enhances the bioavailability of curcumin up to 2000%. It means that this drink just became even healthier!

Be careful when you add black pepper, though. Especially if you are sensitive to its taste. Adding too much pepper can ruin the experience.

List of ingredients for 4 servings of Golden Milk Turmeric Tea:

If you feel like acquiring all these ingredients is too much hassle, there is also an easier option. Buddha Teas has developed a ready-made organic golden milk powder. All you have to do is mix it with hot milk. Click here to check the current price for Buddha Teas Organic Golden Milk.

Below are also some additional ingredients to consider. For example, you can start with the basic ones above, and then make things more interesting by adding some of these next time.

How to Make Golden Milk

Now we got the ingredients and know how healthy this drink is, so you are probably excited to prepare it.

Here is how to prepare your Golden Milk Tea:

Want to take your delicious golden milk along with you?

Just use a travel tea mug and bring it to the office or park and share it with your friends or colleagues!

Are You Ready to Make Some Healthy Turmeric Latte?

If you have never tried golden milk, I warmly recommend that you give this recipe a try. Go ahead and prepare 4 servings (or more) so you can enjoy it together with your family and friends!

One great thing about golden milk is that it is quite easy to make a nice basic version of it. But you can also add all kinds of ingredients and experiment with different methods.

You can try making it with coconut milk, or use homemade cashew or almond milk. You can also try making fresh turmeric juice with a juicer and use that instead of turmeric powder.

Or how about adding some extra ginger to make it spicier? Or even some chili!

Below is the summary of my Golden Milk Recipe: 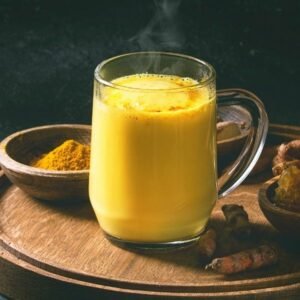 I hope that you will enjoy your golden milk. You can make drinking it a daily habit to help you with staying healthy!

After trying out this recipe, post a comment below and tell me how you liked it. You can also share your own favorite version of golden milk so I can give it a try.

Want to try another traditional Indian beverage? Check out my recipe for authentic masala chai.

Ps. If you liked this recipe, go ahead and share it so others can also try it. Thanks!