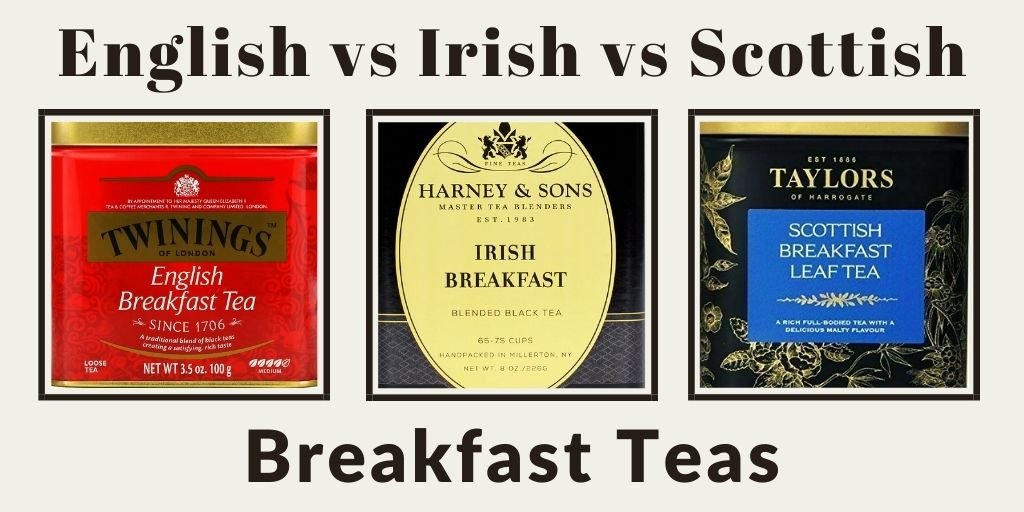 Tea is enjoyed around the world and comes in many forms from Indian chai to Japanese matcha. Breakfast blends originate from Europe and are now popular everywhere.

A morning tradition across the United Kingdom, the term “breakfast tea” describes a robust brew crafted from the finest black tea leaves.

While English, Scottish, and Irish breakfast teas share a common history, each has a distinctive flavor beloved in its native region. Read this guide, try all three, and find your favorite!

What Are Breakfast Tea Blends?

The genesis of breakfast blends is as mysterious as the origins of tea itself. First mentioned in a global trade journal in 1843, the name “English Breakfast Tea” was coined by Richard Davies, a British apothecary, and New York tea vendor.

A blend of China Congou, Flowery Pekoe, and Pouchong teas, it didn’t, however, resemble the brews we know as breakfast teas today.

Edinburgh entrepreneur Robert Drysdale is widely credited with developing the first modern blend — the precursor of English, Scottish, and Irish breakfast teas — in the late 1800s. Each, however, has evolved differently through the decades and has something special to offer.

The Rise of Breakfast Tea

Despite its Scottish origins, the popularity of breakfast tea is attributed to Queen Victoria who upon sampling the brew at Balmoral Castle gave it the royal seal of approval.

Imported to London at her request, it fast became the Brits’ breakfast beverage of choice.

The good luck spread to the Emerald Isle at the end of the 18th century as their traditional black tea took on a more mainland European flavor. Today, the Irish drink more tea per capita than the British or Scottish, most of it coming from India.

Breakfast teas are blends of black tea sourced from around the world. They all come from the same Camellia sinensis plant and are fully oxidized for the richest taste possible.

Once made exclusively with teas from China, the Opium Wars in the mid-1800s brought about a trade embargo that threatened the supply of breakfast tea. So, the East India Trading Company sought exports from India and soon, tea from the Bengal region of India, now Assam Province, became the main ingredient.

Later, Ceylon (now Sri Lanka) began cultivating a variety of teas valued for their diverse flavors based on the altitude and climate in which they were grown.

Today, the most common teas in breakfast blends hail from:

How Does Breakfast Tea Taste?

Breakfast teas have similar characteristics, but each varies in strength and has a different flavor profile depending on which teas are used and in what proportion. Vendors work hard to give their blends a distinctive, memorable taste.

In general, breakfast tea is robust but not bitter or astringent. Served with milk, it’s a comforting cup with plenty of caffeine designed to cut through heavy European breakfasts.

Kindred spirits, English, Irish, and Scottish breakfast teas all have an underlying malty flavor, but that’s where the similarities end.

The Difference Between English, Irish and Scottish Breakfast Tea

What sets the traditional blends apart is strength, bitterness, and flavor notes beyond the expected malty base.

No single formula for breakfast tea exists, so depending on how they’re crafted, English, Scottish and Irish blends can be indistinguishable or unmistakable.

There’s no shortage of different brands, each trying to appeal to different tastes by incorporating novel varieties of black tea.

English Breakfast Tea – The Most Popular

Ask for a cup of “breakfast tea” anywhere in the world, and English breakfast tea is what you’ll most likely get.

Popular around the world, it’s a full-bodied but even-tempered cup that’s universally comforting and neutral enough to complement most food from morning favorites to afternoon pastries. The aroma can be described as warm with notes of honey.

A mainstay on British tables, it typically has the least caffeine of three varieties and may include teas from India, China, and Africa.

But many brands are heavily influenced by Ceylon tea and have a sweet or tangy finish that pairs well with milk, sugar, molasses, or honey.

A lowland tea, the Assam variety is grown only in India and contains more caffeine than other black teas. Rich and malty, it has a deep red color and offers a fruity or floral finish depending on when it’s harvested. The addition of Kenyan tea gives Irish breakfast blends an earthier fragrance than their English cousins.

The dairy industry is ubiquitous in Ireland, so like the Brits, the Irish enjoy a splash of milk or cream in their tea. Yet, it’s also consumed plain or only with sweetener. Served all day despite its relatively high caffeine content, the term “breakfast” tea is rarely heard in Ireland.

Iced tea is catching on in Europe and particularly Ireland where people consume 4-6 cups of tea daily in various forms. If you like tea both hot and cold and with character but never bitter, Irish breakfast tea is a superb choice.

Scottish breakfast tea is the heartiest of the three blends. Thick with Assam, it has a complex, woody flavor with a hint of smoke and a slightly bitter edge.

Blended specifically for the soft water found in Scotland, many Scottish breakfast teas also feature varietals from Sri Lanka, Africa, and Indonesia that give them more depth. The least known among breakfast blends, they offer the greatest variety in flavor.

If coffee is your morning pick-me-up of choice but tea intrigues you, a steaming cup of Scotland’s best will power you through the busiest mornings. We could almost say that Scottish breakfast blends are to tea what espresso is to coffee.

It’s worth a while to try different breakfast blends from brands like Twinings, Harney & Sons, and Taylors of Harrogate. Then pick your favorites and keep a stash available for a nice morning or afternoon cup that suits your mood.

The popularity of breakfast blends waxes and wanes as new trends in tea are introduced, but we always circle around to old favorites. Post a comment below and tell me, which one is yours!