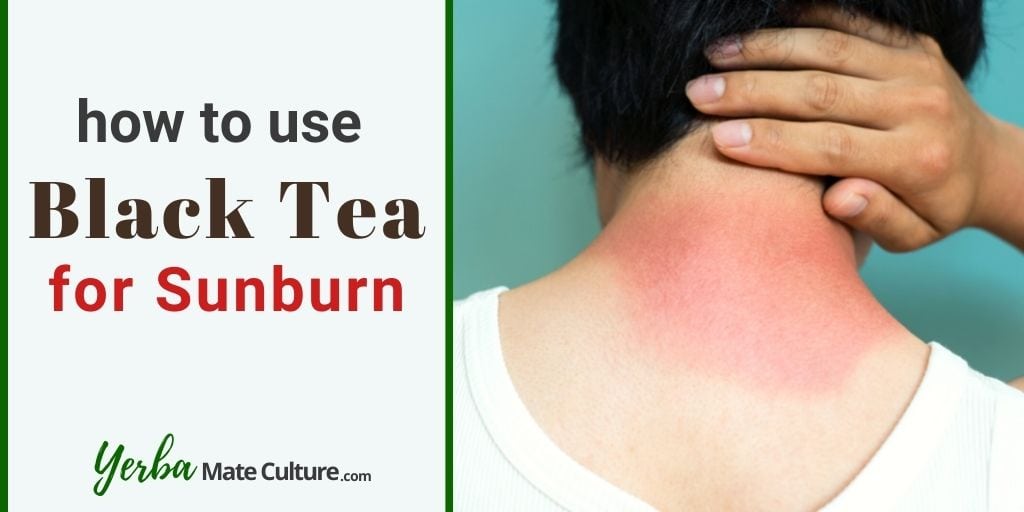 Many people are wary of using creams and ointments that can irritate inflamed skin.

While we usually think of tea for its heat, the truth is that it can have a soothing, cooling effect on a burn. It all comes down to knowing how to use tea therapeutically on the skin.

But is black tea really an effective remedy for sunburn?

While a little tea therapy on the skin may not be enough to reverse a burn, it can definitely help speed up healing and relieve pain. Black tea is considered a gentle, safe, and inexpensive way to get relief following a sunburn.

Let’s take a proper look at how to give your skin a little “tea time” to wash away the pain caused by too much sun exposure.

Why Tea Is a Good Remedy for Sunburn

The same reasons why tea is great for the body as a beverage apply when using it for skin treatments. Black tea is full of tannins and antioxidants that have anti-inflammatory properties.

The immediate benefit of using black tea for sunburn is that a decrease in inflammation can help to relieve the pain associated with a burn. Tea can act as a type of natural topical pain reliever following a sunburn.

Black tea is especially good for sunburns because it has the highest amount of tannins.

Staying out in the sun with unprotected skin invites sunburn. Most people know about the pain, redness, and peeling that follow after too much sun exposure.

However, not everyone understands exactly why the skin reacts the way that it does following a sunburn.

Sunburn happens when ultraviolet radiation from the sun reaches the skin. UV rays actually damage skin down to the cells to create DNA mutations.

The side effects of sunburn are caused by the body’s reaction to the mutations that are occurring.

For instance, skin cells that get too much exposure to the sun will often die off after becoming damaged beyond repair. Blood vessels will begin to dilate when this happens in an attempt to ramp up immune cells in the damaged area.

This is where those telltale signs of sunburn like swelling, redness, and inflammation kick in.

While sunburns do eventually heal, the long-term damage to the surviving cells will linger.

Yes, sunburn can actually cause cancerous cell mutations. Risks for this often come down to the degree of sunburn.

Here’s a look at the sunburn grades:

First-Degree Sunburn: A superficial burn that can make skin red, dry, and tender to the touch. Most first-degree sunburns heal in three to six days.

Second-Degree Sunburn: A partial-thickness burn that penetrates the first two layers of skin. Blistering, pain, and sensitivity to temperature changes are all typical signs of a second-degree sunburn. This type of burn usually takes seven to 20 days to heal. There is also a potential for scarring.

Third-Degree Sunburn: Characterized by pain and blisters a third-degree burn can take up to 25 days to heal. It’s s partial-thickness burn and the risks for scarring are much higher as third-degree sunburns take longer to heal.

Fourth-Degree Sunburn: A full-thickness burn that affects all skin layers. In some cases, it can even impact fat and muscle under the skin. Fourth-degree sunburns can discolor the skin to reach shades of white, grey, and black. Hospitalization is sometimes required.

The use of tea to heal sunburn should never be done in the place of medical attention. Generally, tea is intended to simply provide soothing in the case of burns that are on the superficial side.

In fact, it can be dangerous to apply anything to your skin without a doctor’s approval when you have a third-degree or fourth-degree sunburn.

The tannins, antioxidants, and polyphenols in tea are great for helping to soothe sunburns. They may also be able to repair some minor cell damage.

This makes tea a safe, natural, and affordable way to soothe the sunburned skin.

Many moisturizers and oils can irritate the skin after sunburn. Even a go-to option like ice isn’t recommended because the extreme cold can actually cause further damage to the skin.

But is tea really effective for treating sunburns?

Many people, including myself, have tried it and noticed that it helps. And there is also some scientific research to support this:

There’s also evidence that the polyphenols found in tea may actually be able to help prevent sunburns in the first place.

However, a natural remedy like tea should not be used in place of measures like sunscreen and protective clothing.

How to Use Black Tea for Sunburn

There are several ways to use black tea to get relief after getting a sunburn.

Just remember that hot tea should not be applied to the skin after a sunburn. It’s important to let the tea cool down before using it.

The easiest way to use black tea to heal sunburn is to boil a cup of water, add in a tea bag, and simply allow it to soak until the water is cooled to room temperature. You should notice the water take on a dark color as the tannins are dissolved.

Another option is to use a tea infuser basket or a teapot for preparing the tea.

Next, simply soak a towel or cloth in the tea water to let it take in all of the tannins and antioxidants that have been released. Then put it in the refrigerator to cool it down properly.

Finally, apply the cloth or towel to the burn areas for about 15 minutes. You can repeat the treatment many times during the day.

It’s also easy to simply use tea bags for application in small areas.

This is as simple as allowing tea bags to soak in lukewarm water to activate all of the tannins and antioxidants. Then refrigerate the bags for about 15 minutes.

Finally, wring the tea bags gently to shake off any excess moisture before applying the bag to burn areas.

Dabbing the skin with a cloth or tea bag may not provide enough relief for a whole-body burn. This is where a tea bath can work nicely.

Simply draw a warm bath before adding in enough loose leaf tea (inside a coffee filter) or tea bags to create a body-sized “cup of tea.”

The water should change to a rich “tea-colored” shade of brown when it is potent enough. Allow the water to cool to room temperature before getting in for a soak.

Don’t rinse after getting out!

What Teas Can You Use for Sunburn?

Black tea is considered the top choice for treating sunburns due to its high tannin content.

However, several studies have shown that green tea has the potential to reverse DNA damage caused by UV exposure.

Chamomile tea is another great option that has potent anti-inflammatory properties.

In fact, chamomile is commonly used as a folk remedy for rosacea due to its ability to calm down skin that is flaring up. Additionally, it has been used for centuries as an anti-inflammatory, antioxidant, mild astringent, and healing medicine for treating wounds, ulcers, burns, canker sores, rheumatic pain, hemorrhoids, mastitis, and much more.

Pour on the Healing – Final Thoughts on Using Tea for Sunburn

However, it’s not a replacement for sunscreen, protective clothing, and being reasonable about how much time is being spent in the sun.

The bottom line is that tea may be helpful for taking the painful edge off of sunburn in the short term while potentially helping to insulate cells from long-term damage.

As we can see, tea is not just for drinking. It can be used externally to treat skin and some people even smoke tea.

If you are looking for some black teas that are both delicious and good for treating sunburn, check out my recommended Assam tea and Earl Grey tea brands.