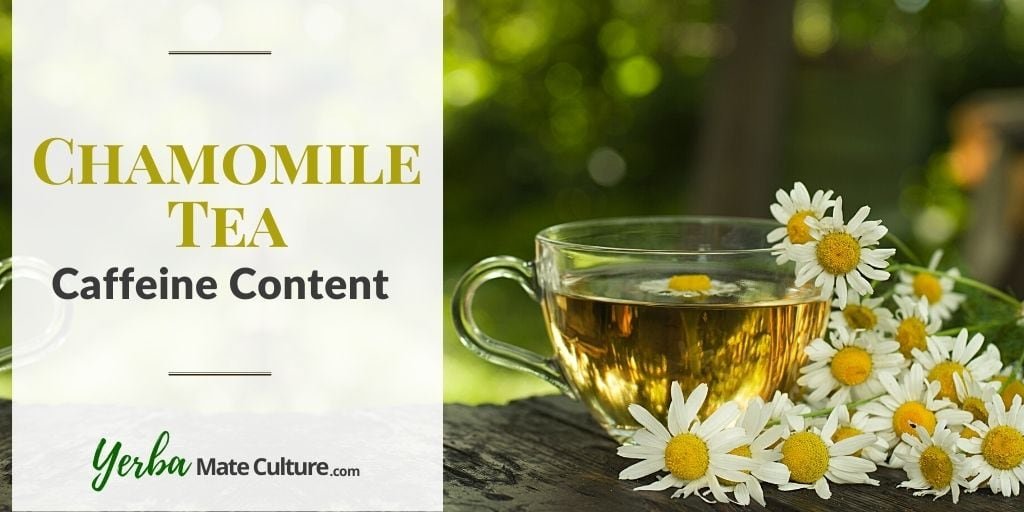 An ancient remedy for common cold, indigestion, anxiety, and even infants with colic, chamomile tea is one of the most popular herbal teas in the world.

We are used to thinking of it as a relaxing cup of evening tea with a pleasant floral aroma and calming effect.

But you might also be wondering if chamomile tea contains any caffeine at all.

The short answer is that pure chamomile tea is naturally caffeine free. However, if you drink it in the morning or afternoon, you can blend it with other ingredients to create an energizing infusion with caffeine.

Now, let’s take a proper look at the caffeine content of different chamomile tea blends. I will also share instructions for preparing pure chamomile tea and a few of my favorite recipes that contain chamomile.

What Exactly is Chamomile Tea?

Chamomile is a flowering plant that belongs to the daisy family. Chamomile tea is usually made by infusing dried chamomile flowers in hot water.

The plant has several species and the two common ones used for herbal teas are:

The taste of chamomile tea is usually described as mild, floral, and slightly sweet. The aroma is delicate and comforting with some apple and honey-like notes.

Note that the taste and aroma of chamomile tea can vary quite a lot depending on the exact species and how it was grown and processed.

Below are some of the science-backed benefits of chamomile tea:

Great for Relaxing and Sleep: Chamomile tea has a calming effect and is great for relaxing, relieving anxiety, and improving sleep.

Digestive Aid: Has a soothing effect that can help with relieving diarrhea, acid reflux, and IBS.

Remedy for Colds and Pain: It can help relieve the symptoms of common cold, menstrual pain, and migraine headaches.

Cancer Prevention: The apigenin in chamomile is shown to have some anticancer properties.

Pure chamomile tea is made with only chamomile flowers and water and it doesn’t contain any caffeine.

It is a caffeine-free herbal tea that has a calming and sleep-inducing effect. This makes chamomile tea one of the best options to drink before bed.

How to Make Pure Chamomile Tea

Making a cup of relaxing chamomile tea is easy:

What if You Want Chamomile Tea with Caffeine?

I often enjoy drinking chamomile tea after lunch or even in the morning. But sometimes I also want to have an energy boost.

So what is the solution?

If I want a strong energy boost, I mix the chamomile with a highly caffeinated tea like Assam black tea or yerba mate. Sometimes I make a milder infusion with white or green tea.

When you want to have chamomile tea with caffeine, mix it with one of the ingredients below:

Yerba Mate – about 80 mg caffeine/cup: Add two teaspoons of yerba mate tea per cup of water to make a herbal tea that will give you a nice energy boost.

Assam Black Tea – about 60 mg caffeine/cup: Having higher caffeine content than other black teas, Assam tea is perfect for making a nice and uplifting cup. Add one or two teaspoons (or one tea bag) of high-quality Assam tea per cup of water.

White or Green Tea – about 25 mg caffeine/cup: Create a nice and mild infusion by adding one to two teaspoons of white or green tea per cup of water. Later in this article, I will also give you my favorite chamomile white tea recipe.

The combination of white tea and chamomile creates a tea that is loaded with antioxidants, has a nice floral taste, and contains just a bit of caffeine to give you little energy boost.

How to make it:

The reason for steeping chamomile first in boiling hot water is to properly infuse it. White tea should not be brewed with water that is too hot, so when you add it afterward the water has cooled down a bit.

If you want to make a healthy and delicious cup of herbal tea, try this blend.

How to make it:

Does chamomile tea have caffeine?

Pure chamomile tea doesn’t have any caffeine. But you can buy blends or mix chamomile with other ingredients to make a drink that contains caffeine.

For example, if you mix chamomile with yerba mate or Assam black tea, you will get an infusion with a relatively high amount of caffeine. You can also make chamomile white or green tea for a mildly caffeinated drink.

What kind of effect does chamomile tea have?

Chamomile tea has a mildly tranquilizing and sleep-inducing effect on our brain. It may increase certain neurotransmitter activity (serotonin, dopamine, and noradrenaline) in our brain, which has positive effects on mood and helps with relaxing and relieving anxiety.

Does chamomile tea have any side effects?

According to research, chamomile doesn’t have side effects for the vast majority of people. However, some people might get an allergic reaction from drinking chamomile tea. This might happen especially if you are allergic to other plants in the daisy family (e.g. chrysanthemums, marigolds).