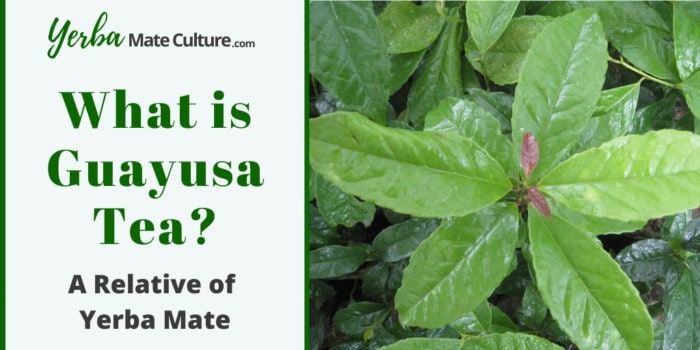 Guayusa tea is a South American drink that is considered a relative of yerba mate. It is a herbal tea with a long history and has been consumed in South America for over 2000 years.

I think that many people who like yerba mate, and herbal teas in general, might find it interesting to try guayusa as well. Just like yerba mate, guayusa tea is a natural, energizing, and healthy drink.

In addition to its uplifting effect, this drink is known for its high content of antioxidants, vitamins, and amino acids. More recently, it has also begun to gain popularity in western countries.

In this article, I will tell you everything you want to know about guayusa tea:

What is Guayusa Tea?

Guayusa tea is brewed from the leaves of a holly tree known by the botanical name Ilex guayusa.

The native Kichwa people of Ecuador traditionally use guayusa in their spiritual ceremonies and rituals. Families would awake very early in the morning to drink guayusa while watching the sunrise.

Members of the tribe would sit around a fire while sipping the tea from gourds. During this time the elders teach the younger children the myths and traditions of the tribe, and shamans play their traditional instruments, such as a bamboo flute which they call kena.

Guayusa is one of three known caffeinated holly trees. As you might know already, yerba mate (Ilex paraguariensis) is also one of them.

Most of the guayusa is cultivated on small family farms in Ecuador. It is usually grown underneath the canopy of the Amazon rainforest, and the trees are trimmed to about waist height to encourage constant growth of new leaves.

Because it is grown in the shade of the forest, it creates a profitable alternative to cutting down the trees.

Next, I recommend that you check out this cool video about Guayusa:

The indigenous people of Ecuador used guayusa as a source of energy and nutrients. It was also used as a natural remedy for many health problems.

The uses and health benefits of guayusa are similar to those of yerba mate:

Possible Side Effects of Guayusa

When consumed in moderation, no links to side effects have been found.

Due to its relatively high caffeine content (more about this later), excessive consumption may cause symptoms like anxiety, and insomnia. Yet, drinking guayusa doesn’t usually cause any jitteriness that is commonly experienced by coffee drinkers.

Guayusa contains some tannins which might interfere with iron absorption. So if you have iron deficiency, pay attention to the amount you are consuming.

If ingested on an empty stomach, you may experience nausea. Yet, I often drink guayusa tea in the morning before breakfast but have not noticed any issues.

Guayusa leaves contain between 1.7–3.5 % of caffeine which is about the same as ground coffee and slightly more than yerba mate. Thus, guayusa tea has a relatively high caffeine content.

A cup of guayusa tea has about the same amount of caffeine as a cup of coffee.

However, the caffeine content can vary greatly depending on how the tea was manufactured and how you brew it. More tea and less water, plus longer brewing time, means a higher concentration of caffeine.

In addition to caffeine, guayusa contains theobromine and theophylline and has an energizing effect similar to yerba mate. It also contains L-theanine, an amino acid that helps in releasing caffeine more smoothly and evenly.

The combination of caffeine, L-theanine, theobromine, and theophylline gives energy which is more balanced and the effect is gentler than coffee.

Thus, guayusa tea is less likely to cause jitters or a feeling of crashing down after it wears down.

How to Make Guayusa Tea

The easiest way to brew guayusa tea is to buy it in tea bags. You can also use loose leaf tea and a french press, or other methods to brew your guayusa.

Basically, you can brew it like any other herbal tea.

Instructions for making 1 serving of guayusa tea with a french press:

Guayusa tea can also be brewed with a traditional method using loose leaf guayusa and the same kind of gourd and bombilla as with yerba mate.

Here are the instructions for brewing guayusa tea in a gourd:

Guayusa is nearly impossible to over brew, and the leaves can be steeped again about half a dozen times before their flavor starts to wane.

One nice option is to add some other herbs like mint or to make a refreshing iced guayusa tea.

Read my article about brewing yerba mate tea to get more ideas for preparing your guayusa.

Unlike yerba mate, which can bear a somewhat bitter taste, guayusa has a smooth, earthy, and slightly sweet flavor. The tea has a rich and earthy aroma that most people find enjoyable.

Some have described the taste as something between mate and green tea. Compared to green tea, the flavor is less tannic and the texture is more creamy.

If you want to enjoy the benefits and energy boost of guayusa without preparing and drinking it as a tea, you can also try guayusa leaf extract. This provides a very quick and convenient way to get a nice dose of this ancient herbal remedy.

Another option is to use guayusa capsules. This is the best option if you don’t want to taste the herb when consuming it, or if you travel a lot and want to take the product with you.

Guayusa – A Relative of Yerba Mate

Guayusa, like its close relative yerba mate, is an amazing plant that gives you energy and has several health benefits. The tea brewed from its leaves has been consumed for thousands of years, and today it can help in the conservation of rain forests.

Now that you know what guayusa tea is, maybe you would like to try it?

Go ahead and read my article about guayusa tea products and where to buy them.

What is guayusa tea?

Guayusa tea is a healthy and energizing herbal drink made with the leaves of Ilex guayusa tree. Indigenous people of Ecuador have consumed it for thousands of years and recently it has become more popular in the Western countries as well.

What are the health benefits of guayusa tea?

Guayusa tea is rich in antioxidants and nutrients and has many health benefits. It can give you energy and aid with losing weight as well as help with concentration and improving mood. It may also help with stabilizing blood sugar, preventing heart disease, and improving digestion.

Does guayusa have any side effects?

In general, guayusa tea is considered safe. Yet, it contains caffeine, and consuming excessive amounts may cause symptoms like restlessness, anxiety, and insomnia. It also has tannins that can cause problems with the absorption of iron. Drinking too much on an empty stomach may cause nausea.

How to make guayusa tea?

You can use guayusa tea bags and steep them in hot water for about 5 minutes. You can also use a french press or a traditional method with a gourd and bombilla to make your guayusa tea.

How much caffeine is in guayusa?

Guayusa leaves contain between 1.7–3.5 % of caffeine which is about the same as ground coffee. On average, a cup of guayusa tea has almost as much caffeine as a cup of coffee. However, the caffeine content depends on the brewing method and ratio of water and leaves.

I hope this article was interesting and contained information that you find useful. If you have any comments or questions, please post them below.