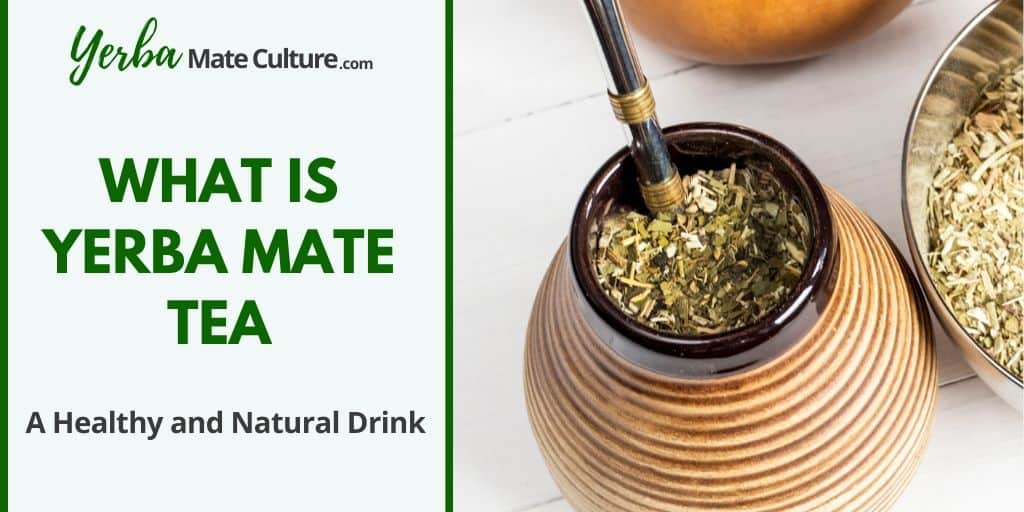 In short, yerba mate tea is an amazing and all-natural drink that gives you more energy and vigor.

I started this website because I want to share the knowledge related to this tasty and refreshing drink. If you want to know more about it, keep on reading, you have come to the right place!

How I Started Drinking It

I first tasted yerba mate tea about 10 years ago. First time I didn’t really know what it was. I thought it was ok, but nothing special, just some herbal tea that has a little bit strange taste. I was more of a coffee person at that time.

Later I started having stomach problems (IBS and acid reflux), and I realized that drinking coffee makes it worse. I started looking for an alternative for coffee and remembered that yerba mate also has a decent amount of caffeine. I started drinking yerba mate more often, and the more I drank, the more I liked it.

Now after drinking yerba mate daily for several years, I really enjoy its taste. It is also nice to try mate products from different brands coming from various countries, as they really differ in taste, aroma, and the energizing effect that they provide.

If we really want to answer the question “what is yerba mate tea?”, we have to start from the early days and see where it all begun. In this chapter, I will tell you about the history of yerba mate tea, and how it became popular around the world.

The indigenous Guarani people were the ones who discovered and started drinking yerba mate tea.

The Guarani used yerba mate leaves to brew tea and they also used them as a currency. They live in Paraguay, South America, where yerba mate trees grow naturally.

During the late 16th-century yerba mate consumption became more popular in Paraguay, which was at the time a colony under Spanish rule. In addition to the Guarani people, also the Spanish settlers acquired the habit of drinking this energizing herbal beverage. In the 17th century, the habit of consuming mate tea spread to Chile, Peru, Argentina, and Bolivia.

In Paraguay, yerba mate became so popular, that it was the main product of the colony. In the 17th century, Paraguay and Argentina were the main producers of yerba mate. Until the mid 17th century, yerba mate leaves were harvested from wild plants. Then the Jesuits were able to domesticate the plant and started plantations for growing it. However, when the Jesuits were expelled during the 1770s, their plantations were abandoned, and their knowledge was forgotten.

The global popularity of yerba mate has increased especially during recent decades. One reason is, that globalization and online stores have made it easily available. People are also becoming more health-conscious, and the health benefits of mate tea have been proven by research.

Currently, yerba mate tea is consumed all over the world. According to the Food and Agriculture Organization of the United Nations (FAO), Brazil produces the largest amount of yerba mate, followed by Argentina and Paraguay.

Cultivation of the Plant

Yerba mate tea is brewed from the leaves of  Ilex paraguariensis, which is one of the three known caffeinated holly trees. Another interesting one is guayusa (Ilex guayusa) from which guayusa tea is made from.

Yerba mate plant starts off like a bush and then grows into a large tree. It can grow as tall as 15 meters (49 ft). The evergreen leaves of yerba mate contain caffeine, vitamins, and minerals.

The growing of a new plant starts from a seed that is usually kept in a greenhouse until its about 7 centimeters (3 inches) tall. Seedlings stay in nurseries for about one year and are then transferred to the field.

When aiming the get a high-quality product, the plants should be grown in a shade under the canopy, and not in direct sunlight. This allows the leaves to develop a better flavor and a higher amount of nutrients. The trees are ready to be harvested when they are about 4 years old. The trees can be harvested once per year, at end of the winter season.

Usually, the harvested leaves are dried by a wood fire. After drying, the leaves are milled and then stored in bags to age the product. The drying and aging processes, as well as the blending, will define the quality and flavor of the product.

There are many ways to prepare yerba mate tea:

The traditional way is to put the ground leaves in a container (gourd) and pouring hot water to brew the mate. Bombilla (a metal straw) is then used to drink mate tea.

Alternatively, milk can be used instead of water when brewing the tea. The traditional way of enjoying yerba mate can also be a social event where the gourd is refilled with hot water and passed among family members and friends.

Hot yerba mate tea can also be brewed using a french press or other suitable equipment.

An easy way of preparing hot mate tea is to buy yerba mate tea bags and make a cup of hot tea the same way as with a regular tea bag. When using a tea bag, the yerba mate tea tends to be milder compared to the traditional method of brewing mate.

One very popular way of enjoying yerba mate is to make iced tea, also called tereré. It is a cold-brewed tea where additional ingredients, such as lemon and mint, can be added to give the beverage an extra fresh flavor.

What could be a more refreshing drink during a hot day, than ice-cold yerba mate tea with a dash of fresh lemon juice and some fresh herbs!

Iced yerba mate tea can also be done by first brewing hot yerba mate tea and then letting it cool down to room temperature. After this, it will be chilled by using ice cubes or by placing it in a refrigerator.

How Does Yerba Mate Tea Taste?

When you taste yerba mate tea for the first time, its earthy and bitter taste might seem a bit odd. It is an acquired taste that may take a while to get used to.

But isn’t this the case with many other drinks as well? Most of the people don’t like beer, coffee, or red wine the first time they try it.

TIP: The easiest way to start enjoying mate tea is probably by using tea bags to brew it. This produces a milder tea that is more gentle to the taste buds of a beginning matero (a person who likes to drink mate).

Moving on to loose-leaf mate tea allows you to prepare it the traditional way, using a gourd and a bombilla. Later you might even start enjoying the strongest type of mate called gaucho mate, which has a bold and malty flavor.

Yerba mate contains several healthy components such as polyphenols and saponins. It can also provide us with minerals like zinc, potassium, magnesium, and manganese. In addition, it contains B vitamins and vitamin C. You can read more about yerba mate nutrition facts here.

Mate tea also has a relatively high level of caffeine. The caffeine content of dry leaves is usually between 1% to 1,5% compared to about 3% for ground coffee.

Thus, a cup of yerba mate tea contains about half of the amount of caffeine compared to the same amount of coffee. If mate tea is prepared the traditional way, its caffeine content can be much higher.

Mate tea has many positive effects on your health and in South America it has been traditionally used to cure anything from flu or a hangover to constipation. It is said that during hard times its energizing and healthy properties helped generations of Argentinians in surviving and staying fit.

As yerba mate tea is becoming more popular all over the globe more resources are allocated to researching its potential health benefits. Yet, all of them have not yet been properly researched.

Here are some science-backed benefits of yerba mate:

It may also improve allergy symptoms and promote deeper sleep. In addition, yerba mate contains powerful antioxidants that can help in reducing inflammation in our body.

Read my article about the health benefits of yerba mate, if you want to know more.

Each South American country has its own culture of producing and enjoying yerba mate tea. These traditions have evolved over centuries and are often an important part of the local everyday life.

Yerba mate helped the people of Argentina when the times were rough, by providing energy and beneficial nutrients that helped them with survival.  Today it is an essential part of the culture in Argentina, and you can see groups of people passing a mate gourd around in parks and other popular hangouts.

Argentinians use yerba mate as part of their culinary tradition. It is used as an ingredient in different kinds of drinks, desserts, and other dishes. One interesting way of enjoying mate tea is to make a caramelized version of it by adding sugar and heating it over hot coals.

In Brazil, yerba mate is known as chimarrão, and it is most often drank from large gourds. Brazilian mate also tends to be more bitter and it’s usually free of stems. Each region of Brazil has its own type of mate tea, varying in bitterness and composition.

The people of Paraguay like to include different herbs in their mate tea. Maybe the most common herb included with mate is mint. They also like to drink the cold version of mate cold tereré, which is sometimes brewed with fruit juice.

If you want to try an excellent Paraguayan mate flavored with herbs, check out my review of Pajarito Mint and Lemon yerba mate.

Uruguayans really love their mate tea and wherever you go, you can see them carrying their mate cups with a thermos flask full of hot water. You can see people sipping mate on the street, in public transport, or even when driving a car.

As we all know, Syria is not located in South America, but strangely enough, yerba mate tea is a very popular drink among the Syrian people.

The story behind this dates back to the mid 19th century. During those times there was an influx of Syrians coming to Argentina. The ones who went back to Syria also brought the habit of drinking mate tea with them.

What is Yerba Mate Tea – A Refreshing and Healthy Choice

Yerba mate is an amazing plant and the tea brewed from its leaves has been consumed by humans for thousands of years. In addition to its good taste and refreshing quality, yerba mate tea also provides several health benefits, and enjoying it can be a nice social event.

Drinking yerba mate is also an excellent way of getting more energy to perform your physical exercise or to be able to make it through a long workday.

Here is a great video that sums up the essence of yerba mate:

After reading this article you now know what is yerba mate tea. However, there are many more interesting things to learn about this powerful and healthy drink. If you want to read more about yerba mate, just follow the links in this article and check out the other articles on this site.

Wondering where to buy yerba mate or which brand to choose?

Go ahead and read some of the review articles on this site to find out what are the best yerba mate products!

I hope you have found this article interesting. If you have any questions or comments please post them in the comments section below.

10 thoughts on “What is Yerba Mate Tea – A Refreshing, Healthy and Natural Drink”