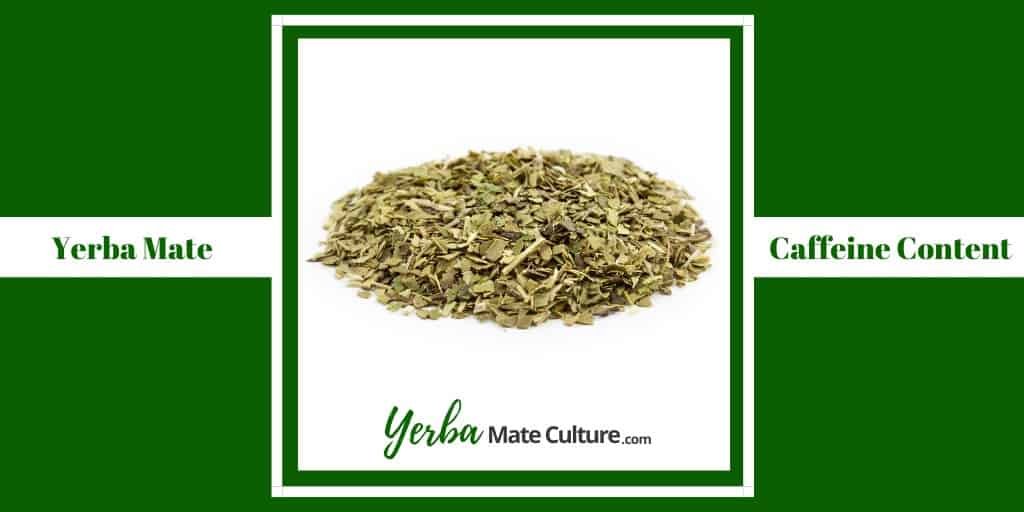 Have you ever wondered how much caffeine is in yerba mate? Or how it compares to coffee and tea.

Yerba mate tea is a drink traditionally consumed in South America. Nowadays it’s becoming more popular all over the world because of its refreshing taste and energizing effect.

Many people are also switching from drinking coffee into drinking yerba mate or replacing part of their coffee consumption with it. Read my article about yerba mate to learn more about the history and cultivation of this amazing plant.

In this article, I will explain everything you need to know about yerba mate caffeine content and how it matches with coffee and tea.

If you just want to quickly compare the caffeine content between mate tea, coffee, black tea, and green tea, take a look at the chart below:

As you can see the caffeine content of yerba mate greatly depends on the brewing method. Of course, the same applies to coffee and tea as well.

There are also other factors that have an effect on the amount of caffeine. The type/brand of the product, and brewing time, to mention a few. Thus, the above chart presents the estimated averages per cup, not exact values that always apply.

Yerba mate tea has a long history among South American athletes. Runners, surfers, football players, martial art practitioners, and many other athletes, as well as regular people, are consuming it in order to feel more vibrant and energetic.

Today, yerba mate is available all over the world. Along with coffee and tea, it has become a favorite refreshment for many people.

Athletes often boost their exercise by taking pre-workout supplements that contain stimulants. Some prefer just to drink a cup of coffee before starting to work out.

I like to drink yerba mate before doing sports because it gives me nice energy levels and focus, but doesn’t make me jittery or cause a sudden crash after the effect starts wearing off.

So why is it that yerba mate tea has a different effect compared to coffee? After all, both of them contain caffeine.

We’ll get to that a bit later. But first, let’s take a closer look at how much caffeine there actually is in yerba mate.

Maybe you’re wondering what is causing such a huge variation?

The type of mate product, the amount you use, and the way you brew it, all have a significant effect on the caffeine level of your mate tea.

In general, yerba mate tea brewed with tea bags has the lowest level of caffeine, while mate brewed with the traditional method (gourd and bombilla) has a much higher caffeine content.

According to a study from 2009, yerba mate brewed with 50 grams of loose-leaf mate and 500 ml (17 oz) of water had a caffeine content of about 380mg, which equals to about three cups of coffee.

Dry yerba mate leaves usually contain between 1% to 1.5% of caffeine compared to about 1.2% to 3% for ground coffee.

In South America, yerba mate is almost exclusively consumed with the traditional method. According to my experience, in North America and Europe, it’s also common to use yerba mate tea bags or french press for brewing the tea.

Therefore, the above-mentioned average caffeine content of a cup of mate tea might not be the most suitable way of measuring.

So I mentioned earlier that the caffeine in mate tea seems to act differently compared to coffee. What do I mean by this? And how is it even possible?

If you drink too much coffee it can make you feel jittery and uncomfortable. Many people have noticed that yerba mate lacks these side effects entirely.

It has a stimulating and calming effect at the same time. This is caused by the fact that, in addition to caffeine, mate tea also has two other components that stimulate our central nervous system.

The combination of these three boosters (caffeine, theobromine, and theophylline) works together and creates an effect different from coffee.

Go ahead and watch this informative video that compares yerba mate and coffee:

Looking for information? Read this article that compares yerba mate and coffee.

Usually, a cup of yerba mate contains a much higher amount of caffeine compared to a cup of green tea. However, as explained earlier, this depends greatly on the brewing method of the mate tea.

One cup of green tea contains about 25 mg of caffeine. It is comparable to yerba mate tea brewed with a tea bag.

A cup of strong black tea has approximately 50 mg of caffeine. This is still much less than what yerba mate tea has on average.

Compared to tea, yerba mate is definitely a better energy booster due to its higher caffeine level.

Get a Natural Energy Boost with Yerba Mate Tea

Some people may claim that yerba mate contains matteine which is different from caffeine. However, it seems that matteine is just a different term for caffeine.

The effects of yerba mate are truly different from other drinks that contain caffeine, but this is because it also contains two other stimulants: theobromine and theophylline.

Instead of drinking yerba mate tea, you can also use yerba mate capsules or other supplements. I have also put together an article with more information related to yerba mate extracts and supplements.

As a conclusion, we can say that yerba mate tea is a very refreshing and energizing drink that has relatively high caffeine content.

It is also a healthy drink but you should still avoid consuming excessive amounts of it. Especially if you’re pregnant or sensitive to caffeine. You can read more about the possible side effects of yerba mate here.

If you are planning on buying some mate tea, check out this review article with 5 different yerba mate products. It will help you with choosing the right kind of product for your liking.

I hope you found this article useful. Post a comment in the comments section below and tell me about your experiences related to mate and its energizing effect and caffeine content.

How much caffeine is in yerba mate?

Dry yerba mate leaves usually contain between 1% to 1,5% of caffeine. The caffeine content of yerba mate tea depends on the brewing method and varies between 20mg and 180mg per cup.

How much caffeine does yerba mate have compared to coffee?

A cup of yerba mate tea contains about 70 mg of caffeine on average, while a cup of coffee averages at 120 mg of caffeine. However, the caffeine concentration of both beverages can vary greatly depending on the type of product and brewing method.

How much caffeine does yerba mate have compared to black tea and green tea?

On average, a cup of green tea contains about 25 mg of caffeine while a cup of strong black tea has approximately 50 mg of caffeine. The caffeine content of one cup of yerba mate tea is about 70 mg (it depends on the brewing method). Compared to both green and black tea, yerba mate has more caffeine.