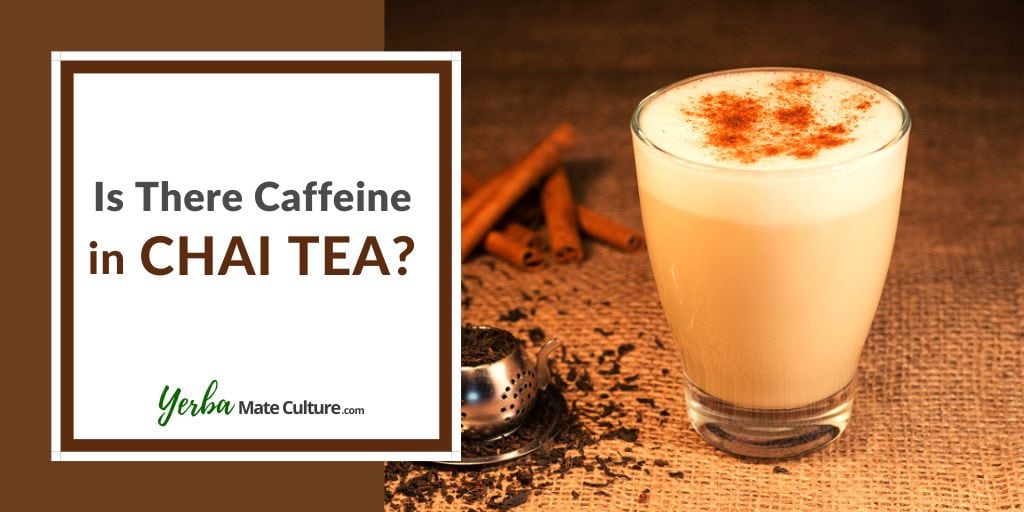 Masala chai is a famous Indian tea drink known for its sweet, complex, and full-bodied taste. It has become so popular that most coffee shops now have it on their menus — or at least some version of it.

While the “chai lattes” and “iced chai lattes” you can order from Starbucks and Dunkin’ Donuts are not exactly the same as the traditional Indian version, they are delicious and energizing tea drinks full of nutrients and healthy antioxidants.

But does a chai latte or an original Indian chai contain any caffeine?

The simple answer is — yes, they do!

The caffeine comes from black tea used in brewing chai, and the amount of caffeine can vary greatly depending on how the drink was prepared.

To make things a bit more complicated, there are also versions of chai that only contain herbal ingredients and are caffeine-free.

In this guide, we will discuss the different versions of chai and how much caffeine they have. I will also tell you how to make a heavenly chai or iced chai latte at home.

So buckle up, hold on to your kulhar (a traditional clay cup for chai), and get ready to learn all about chai tea and caffeine!

If you just want to quickly compare the amount of caffeine in typical chai latte and masala chai to some other popular drinks, take a look at the infographic below:

Note: the amounts in the infographic above are only estimates and can vary greatly depending on the ingredients and brewing method used.

Does Chai Tea Have Caffeine? How About Chai Latte?

Before we go into details about chai and caffeine, let’s take a quick look at what exactly is this delicious and healthy beverage made with.

What Exactly is Chai Tea?

The word “chai” actually means tea in India, and when we say chai in Western countries, it usually refers to masala chai, which translates to “mixed-spiced tea.”

This popular Indian beverage is typically made with the following components:

Yet, there are many versions of chai being served around the world. Some might be made with various types of black tea, green tea, or herbal ingredients like rooibos.

One great thing is that the benefits of chai tea are many, as it can help you with controlling hunger and losing weight, improve digestion and immunity as well as boost your energy levels and brain health.

Then what is chai latte all about?

This trendy tea drink can be found on the menus of most coffee shops and is great both hot and iced. It simply means black tea with spices that is served with foamed milk.

So there isn’t necessarily any real difference between traditional masala chai and chai latte except for the foamed milk.

The exact recipe for each drink varies depending on where you order it.

The caffeine content of chai depends on the ingredients used to make it.

As mentioned earlier, the traditional Indian masala chai is made with Assam black tea, which is known for its high caffeine content. Thus, it also contains a hefty amount of caffeine.

If you are having chai made with some other type of black tea or green tea, it will probably contain less caffeine. And chai made with only herbal ingredients does not have any caffeine in it.

How Much Caffeine is in Chai Tea and Chai Latte?

As a rough estimate, we can say that an average cup of chai or chai latte contains about 60 to 100 milligrams of caffeine.

The exact amount of caffeine in your cup of chai mainly depends on the following factors:

When you need an energy boost, a cup of coffee is one of the most common choices.

Iced and hot coffees are available anywhere from Starbucks and Mcdonald’s to old-school coffeehouses.

But will a chai latte or a cup of hot masala chai have a similarly uplifting effect?

When compared ounce-to-ounce, coffee is stronger — an average 8-ounce cup has about 120 milligrams of caffeine. But a large chai latte can have as much, or even more, punch in it.

Of course, this depends on the size of your drink and where you order it or how you brew it at home.

So let’s take a detailed look at the amount of caffeine in some popular chai drinks from different brands.

Does Starbucks Chai Latte Have Caffeine?

The venti-sized (24 oz) chai drinks have 145 milligrams of caffeine.

If you want even more caffeine, try ordering a “dirty chai” — that’s a chai tea latte with an espresso shot added to it!

Yes, both Dunkin’ Chai Latte and Iced Chai Latte have 105 milligrams of caffeine for the medium (24 oz) sized drink.

Does Twinings Chai Tea Have Caffeine?

Yes, Twinings Chai teabags contain black tea and have caffeine, but there is no information available about the exact amount of caffeine.

Does Tazo Chai Tea Have Caffeine?

How to Make Masala Chai or Iced Chai Latte at Home

Now I’m going to explain how you can make chai at home. It’s not very difficult, but you need some time and quite a few ingredients.

If you want to make things easier and faster, I also have a guide with the best Indian chai brands that will give you great results in minutes.

Ready to make everything from the beginning?

Here is my favorite chai tea recipe for six servings:

You will need the following equipment:

How to prepare it:

So how about that iced chai latte?

I recommend you try the recipe above and make six servings of masala chai — but don’t drink all of it!

Save a part of it and let it cool down to room temperature, then put it in the refrigerator. The next day you can take a large glass, add a generous amount of ice, and pour the chai on top. Then you can also add some cold foamed milk.

And voilà, there you have it — an iced chai latte!

You might also want to try out some of the following modifications the next time:

Now you know all there is about chai and caffeine.

So next time you order a chai latte at a coffee shop or make one at home, you know how much caffeine it has.

This information is very useful because sometimes you just need a proper dose to wake you up in the morning or to keep you going after lunch. On the flip side, you might not want to consume a lot of caffeine late in the evening — especially if you are sensitive to it.

Enjoy your chai and feel refreshed!