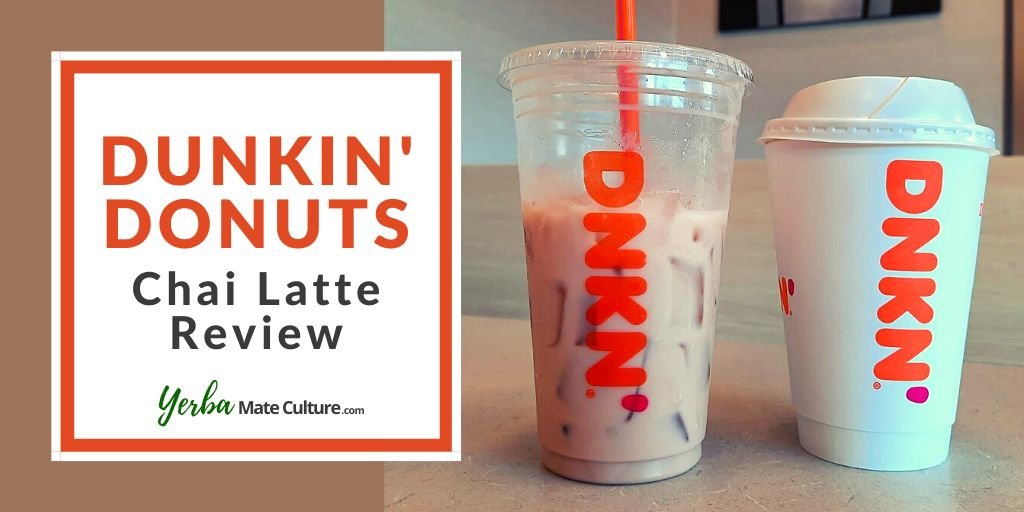 Getting this review of Dunkin’ iced and hot chai lattes done had been on my mind for a while because finding a good chai is pretty hard for most people who don’t live in major cities.

I was reluctant to taste the Dunkin’ spin on chai because this is something that can easily go wrong.

So are the Dunkin’ chai lattes any good?

The Dunkin’ iced chai latte has a nutty color. I was pleased to see that it didn’t just look like milk dumped in a cup with some spices.

Unfortunately, this is how some chains do iced chai lattes. Not Dunkin’!

This chai latte looks like a slightly milkier version of standard iced coffee from Dunkin’.

Let’s set up some expectations for when you order your own Dunkin’ iced chai latte. Dunkin’ doesn’t make this drink foamy. In fact, there was zero foam in this version.

You’ll instead notice a frothy quality that makes this drink feel thicker than a traditional iced coffee drink.

However, it’s a different story when it comes to the hot version of the chai latte. I’ll cover the fluffy, velvety surprise that the drink comes within just a minute!

Nutmeg. This was my first thought after sipping my Dunkin’ iced chai latte. The nutmeg is definitely the strongest flavor that kicks through even though it’s made with a full list of chai spices that includes cinnamon, cardamom, and nutmeg.

In fact, the nutmeg quotient is so strong that your taste buds actually shift to thinking that you’re sipping a pumpkin latte from time to time. The flavor had a very strong, sweet quality that embodies all of the dessert-like qualities of a latte with just a hint of the earthiness that sometimes comes through with chai.

The recipe uses both chai tea syrup and brewed chai tea extract to get that flavor across.

So how about the caffeine content of Dunkin’ iced chai latte?

Normally the caffeine content of chai is somewhat comparable to the same amount of black tea.

The tea extract used in Dunkin’ chai is made using black tea to give you a decent caffeine kick.

In fact, I was surprised to learn that a medium Dunkin’ iced chai latte has 105 mg of caffeine. This is because the drink is quite large (24oz).

For comparison, a regular medium Dunkin’ coffee has 210 mg.

But I wasn’t that surprised to learn that my medium-sized latte contained 290 calories because it is a very dessert-like drink. However, that slightly excessive number of calories is at least balanced out by 9 g of protein, 2 g of dietary fiber, 9 g of fat, 323 mg of calcium, and 425 mg of potassium.

So it’s not all sugar!

Chai is always a great go-to choice because it’s rich in antioxidants, great for heart health, beneficial for digestion, and excellent for getting an energy boost.

All in all, like the Dunkin’ Donuts Iced Matcha Latte, this is a refreshing and nutritious option with just the right amount of caffeine to cheer up your day!

I ordered my medium Dunkin’ iced chai latte with whole milk. You can ask for almond milk, oat milk, coconut milk, or any other kind of milk you want when you order one.

But that’s where the customization ends because Dunkin’ chai drinks are all made with a mix. Of course, you can feel free to ask for any flavor shot you want.

I think vanilla, hazelnut, caramel, and butter pecan could all work with the strong nutmeg flavor if you want to experiment. However, I’d probably just order the drink “as is” next time because it’s honestly very tasty.

I needed to know how the Dunkin’ chai latte would taste hot!

The dessert-like taste of the iced version already had “warming” qualities that I thought would translate perfectly to a hot beverage.

So was I right?

The Dunkin’ hot chai latte is much more of a sensory experience than the iced latte. Unlike the foam-free iced version, the hot version is topped with a cloud of thick, velvety foam that permeates every sip.

The combination of foam and heat actually draws out the nutmeg, cardamom, and cinnamon in a much stronger way. If you hate skimpy lattes that disintegrate into ordinary coffee or tea before you’re done sipping, you’ll love that this drink left enough foam at the end to scoop up a whole spoonful.

Like the iced chai latte, the hot version has a nutty color. It also uses the exact same mix that consists of chai tea extract made with black tea.

Also, the calories and nutritional facts are pretty comparable between hot and cold as long as you order the same size.

You can ask for any type of milk when having your hot Dunkin’ chai latte made. I had mine with whole milk again.

I also asked for a vanilla shot when ordering this one.

While I’m not sure if the vanilla was responsible for the dramatic boost in flavor I experienced with the hot version, I’ll at least say that vanilla is a great choice for bringing out the warm, dessert-like flavors in the mix.

Is the Dunkin’ iced chai latte worth trying?

I honestly liked it. It’s definitely on of the best Dunkin’ Donuts teas on the menu.

Most people will love the flavor profile that blends just a pinch of chai’s earthiness with some kick from nutmeg, cinnamon, and cardamom.

My only criticism would be that I’d like to see the recipe tone down the nutmeg in order to let the cinnamon and cardamom come through a little more.

The hot version also passes my test for being delicious, thick, and creamy.