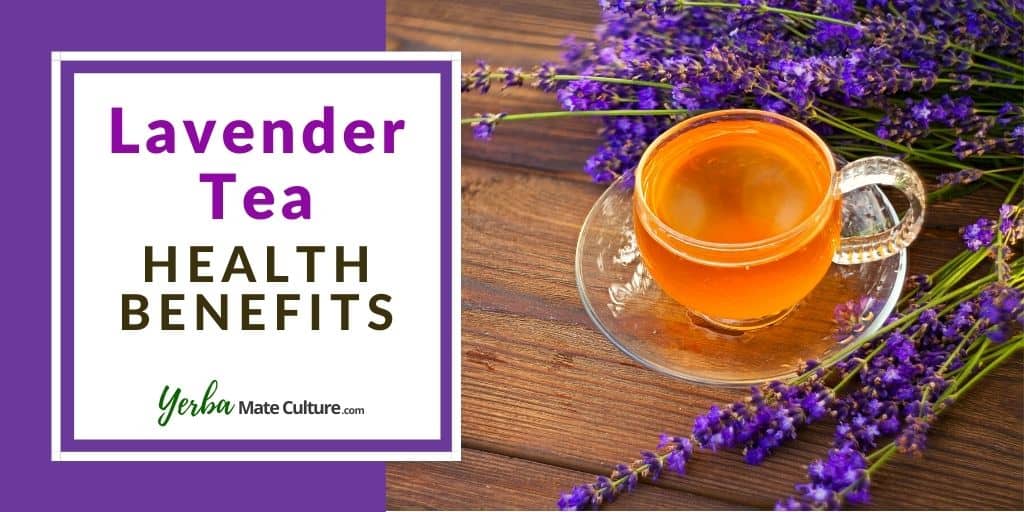 Lavender is widely used in aromatherapy but there is more to the purplish flowering plant than meets the eye. It is actually a powerful healing herb used for centuries as an essential oil, in teas, and other herbal infusions.

One of the most notable lavender tea benefits is its calming effect on the nervous system. Continue reading to learn more about how to use this herbal tea as a natural remedy for physical and mental complaints such as anxiety, insomnia, pain, and indigestion.

What is Lavender Tea?

Lavender tea is an herbal infusion made by brewing the purple buds of the plant in hot water. The leaves hold therapeutic value and the tea is thought to provide a range of benefits backed up by scientific research.

About the Lavender Plant

Lavender (Lavandula) is a relative of the mint plant family, Lamiaceae, and believed to be a native of the Mediterranean, Middle East, and India. There are over 30 species and subspecies which are also grown in places like France, the USA, Canada, Japan, and Australia. The shrub, with its silvery-green leaves, produces aromatic purplish to magenta flowers.

The four main categories of lavender are:

Lavandula has many uses. You’ll see lavender beautifying perennial gardens or smell it in the air at spas. There are also lavender bath products, household scents, and lavender extracts, loose flowers, and tea bags.

History of Medicinal Use

Lavender is traditionally believed to have both therapeutic and curative properties. Practitioners of folk medicine have used it as a herbal remedy for a variety of ailments, particularly stress, mood changes, muscle spasms, indigestion, headaches, sore throat, menstrual pain, burns, and insect bites. Meanwhile, the ancient Greeks and Romans inhaled its soothing scent to induce sleep.

Aroma and Taste of Lavender Tea

Lavender tea has a unique, distinctive smell and taste ranging from sweet floral to earthy with hints of mint and rosemary. Some blends give off a smoky or woody flavor while others have a note similar to green tea or green apple.

Let’s take a look at some reasons why many people swear by lavender tea and what research says about its health benefits.

The positive effects of lavender on the nervous system make it an excellent aid for people who have trouble sleeping because of stress, anxiety, depression, or menopause. Or maybe you just want some help to fall asleep faster and improve the quality of your sleep.

Inadequate sleep because of sleep disorders, such as insomnia, is also frequently seen in mothers following labor and delivery. One study found that lavender aromatherapy was effective in improving sleep quality in postpartum mothers. A group of mothers in the study was asked to inhale lavender fragrance on a cotton ball four times a week for several weeks. The women experienced “a significant improvement” in sleep quality compared to a group of postpartum women given a placebo.

2. Helps with Anxiety and Depression

Lavender aromatherapy and lavender tea may help relieve anxiety and depression thanks to the nerve-calming effects of the active compounds linalool and linalyl acetate.

An indeed, a review study from 2017 supports lavender’s efficiency in treating anxiety disorders.

Another study from Taiwan concluded that lavender tea helps reduce depression and improve sleep quality in postnatal women. The women reported feeling less fatigue and depressed after two weeks of smelling lavender aroma and drinking lavender tea compared to a group of women who received regular postpartum care only.

Interestingly, the anti-anxiety effects of an oral lavender oil preparation are also found to be even more effective than medications, such as lorazepam, used to treat anxiety disorder.

3. May Help with Menstrual Cramps

Lavender tea may be appealing to you if you’re one of the millions of females who suffer period pain from menstrual cramps.

A clinical trial was conducted in Iran on 200 adolescent girls and young adult women students. They were asked to smell lavender 30 minutes a day, for the first three days of their menstruation, and for two consecutive menstrual cycles. The students reported feeling far less severe pain during the treatment period.

Similarly, lavender shows therapeutic effects on menstrual pain when applied to the skin. For example, lavender oil massage decreased the severity of the pain in a group of women who experienced severe menstrual pain compared to women massaged with another type of oil.

The linalool and linalyl acetate in lavender also showed anti-inflammatory activity which suggests the herb may decrease inflammation.

The pain-relieving and anti-inflammatory activities of lavender essential oil (LEO) were tested and confirmed with animal subjects. The plant’s ability to decrease inflammation suggests that drinking lavender tea regularly may help the immune system regulate inflammation and ease inflammatory conditions such as arthritis.

Lavender’s ability to reduce inflammation may explain why herbalists use it to treat wounds. In fact, a study evaluated lavender oil activity on wounds and reported lavender oil may promote wound healing by speeding up skin tissue repair.

I was thrilled to learn that the health benefits of lavender tea extend to skin health since I’m prone to skin irritation. Apparently, the anti-inflammatory effects of lavender may be responsible for its ability to improve skin conditions such as rash, eczema, and psoriasis, an inflammatory autoimmune disorder with no cure.

If you’re already using lavender for stress relief and you have psoriasis, it’s like killing two birds with one stone since stress is a common cause of psoriasis flare-ups. The essential oil of lavender (EOL) may also help acne and other skin conditions caused by bacteria because lavender possesses antimicrobial agents and antioxidants.

Speaking of antioxidants in lavender, do you know that the plant is used to fight digestive problems? A study from 2014 tested the extract of Lavandula viridis L’Hér (green lavender) to determine if it can alleviate digestive disorders. The researchers assured that it does so through antioxidant activities.

Furthermore, the herb can fight inflammatory bowel disease (IBD), Crohn’s disease, ulcerative colitis, and other acute and chronic intestinal symptoms caused by bad bacteria in the gut. Researchers confirmed the potential therapeutic effects of lavender against acute colitis after observing its ability to improve gut flora.

Last but not least, regularly consuming lavender tea may provide natural relief for respiratory conditions such as bronchitis, coughs, colds, and other flu symptoms.

My grandmother used to give me a lavender steam bath whenever I had a cough and cold. She finished up the therapy by giving me a cup of freshly brewed lavender tea and dabbing a drop of lavender essential oil on my pillow to help me breathe better.

Possible Side Effects of Lavender Tea

Lavender is thought to be very low in toxicity when used in small doses and relatively safe for human consumption. But there is also some potential for side effects.

For example, it could cause hormonal interference and may cause breast growth in young males. However, this is very rare and has only been connected with soaps and lotions that contain lavender.

Lavender can also interact with or enhance the effects of medication used to treat anxiety or seizures. People who are allergic to the plant may also develop an allergic reaction to the tea and should avoid it. If you’re pregnant, do not drink lavender tea before speaking with your doctor.

How to Make Lavender Tea

Making a nice cup of tea with loose lavender buds is easy. You can use a French press or tea ball to make it.

Here is how to prepare one cup of relaxing lavender tea:

If you want your lavender buds or other teas to stay fresh longer, store them in a tea container that offers protection from humidity and UV rays.

Where to Buy Lavender Tea

Lavender tea bags, loose flowers, and extracts are readily available online and at herbal stores for your convenience. I also recommend that you take a look at this guide with reviews of my favorite lavender teas.

Lavender Tea Health Benefits Are a Sip Away

Adding lavender tea to your collection of herbal teas may provide many health benefits and aid with treating a variety of common ailments.

I often prepare a relaxing blend of lavender and chamomile tea before bedtime. Sometimes I add other herbs like ginger and licorice root as well. I feel like this is a nice ritual for calming down and I rarely have any problems falling asleep after drinking a few cups.

Please post a comment below and tell me about your experiences with lavender tea and what benefits you have experienced from drinking it.