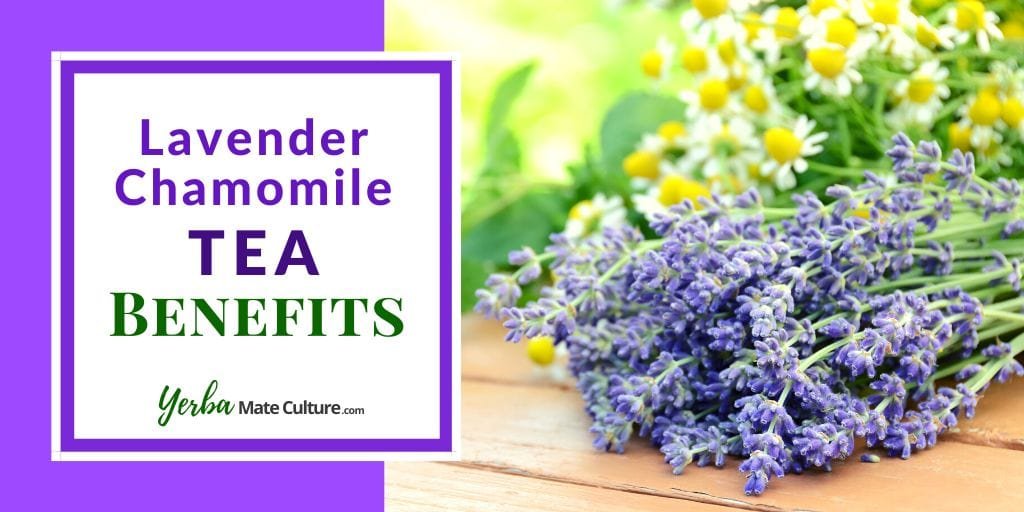 Lavender lovers have a lot to be excited about. It turns out that delicious lavender chamomile tea is packed with health benefits.

Many of us grew up enjoying the calming effects of these herbs. But what we didn’t necessarily realize is that there’s tons of science-backed proof regarding the health benefits of lavender chamomile tea.

Take a look at why this soothing drink is one of the best caffeine-free teas and just might be an elixir for better living.

Chamomile and lavender do so much more than simply help us unwind after a stressful day. They can provide benefits for everything from better digestion to cancer prevention.

A steaming cup of lavender chamomile tea might also help you fight off your next cold.

Next, let’s take a proper look at all of the science-backed health benefits of lavender chamomile tea.

1. May Relieve Anxiety and Depression

Research shows that both lavender and chamomile can help reduce symptoms of anxiety and depression. Combining the two can create a mood-boosting powerhouse.

In a 2105 study, researchers looked specifically at the effects of chamomile tea on sleep quality, fatigue, and depression in postpartum women.

What they discovered was that chamomile tea may be recommended to postpartum women as a supplementary approach to alleviating depression and sleep quality problems. However, the benefits of chamomile only provided relief in the short term.

That means that a cup of tea should be seen as a mood-management tool instead of a one-time treatment.

Lavender has also been found to have strong benefits for people suffering from anxiety.

Based on a 2017 study looking at the use of essential oil of lavender in the treatment of anxiety disorders, researchers found that lavender acts as an anxiolytic agent that induces a calming effect without sedation.

What’s more, lavender is considered a safe option with relatively benign side effects.

An amazing night of sleep may be just a cup of tea away. Both chamomile and lavender are herbs with proven benefits for better sleep.

There was also an important sleep study involving lavender that showcases its benefits for improving sleep quality.

Based on the findings of a 2015 study, aromatherapy involving lavender fragrance improved sleep for mothers during the postpartum period.

If you are looking for a ready-made bland that contains chamomile, lavender, and plenty of other relaxing herbal ingredients, check out my review of Yogi Bedtime Tea.

A big cup of lavender chamomile tea is your digestive system’s best friend.

Chamomile’s anti-inflammatory properties can help to soothe inflammation throughout the digestive system. It is especially helpful in reducing gas, soothing the stomach, and relaxing the muscles responsible for moving food through the intestines.

Chamomile has also been cited by scientists as an herbal remedy to prevent peptic ulcers. While this benefit may be linked to chamomile’s anti-inflammatory properties, we also know that chamomile inhibits a specific bacteria strain called Helicobacter pylori that contributes to stomach ulcers.

In addition to this, lavender may play an important role in helping to build gut health. According to a study from 2012, lavender modulates the enteric microbiota to protect against Citrobacter rodentium-induced colitis.

4. Remedy for Colds and Flu

Start brewing the lavender chamomile tea in preparation for cold and flu season!

The truth is that chamomile tea has been used medicinally since ancient days. Dried chamomile flowers are teeming with terpenoids and flavonoids that are credited with having medicinal properties.

According to researchers, this could help explain why the tea appears to boost the immune system to fight infections associated with colds. The great new is that this effect can last for up to two weeks even if you stop drinking chamomile tea!

Chronic inflammation leaves many people living with pain and illness. Cutting off sources of inflammation can be crucial for good health because we know that inflammation is closely linked with cancer.

It turns out that chamomile is one of the most effective herbal remedies for inflammation. According to a 2010 study, chamomile inhibits nitric oxide synthase expression making it a potentially effective therapeutic anti-inflammatory agent.

Both lavender and chamomile have been identified as having inhibitory effects against the herpes simplex virus infections.

This points to the idea that both herbs have strong antiviral properties that may help to shield the body against a wide variety of viral invaders.

Additionally, the analgesic and anti-inflammatory activities demonstrated by lavender can help to soothe pain and inflammation associated with infections.

Chamomile contains a bioflavonoid compound called apigenin that exhibits anti-mutagenic, anti-inflammatory, antiviral, and purgative effects. It has also been found to strip cancer cells of their strength.

According to researchers, apigenin may play a role in preventing several different types of cancers including breast cancer, cervical cancer, colon cancer, and lung cancer.

Are There Any Side Effects?

Chamomile lavender tea is generally considered safe and there should be no side effects.

However, if you are allergic to either plant you might get some adverse effects. Also, if you are pregnant or on some kind of medication, consult your doctor before starting to drink chamomile lavender tea.

This herbal tea is also caffeine-free so you don’t have to worry about getting jittery or any other unpleasant side effects that high-caffeine teas might have.

Final Thoughts on the Benefits of Chamomile Lavender Tea

The relaxing reputation of lavender chamomile tea simply doesn’t do this drink justice.

In addition to soothing the mind and body, lavender chamomile tea may actually be fighting some very powerful battles behind the scenes to keep the body free of disease.

Making a healing cup of this herbal tea is easy — just add some fresh or dried chamomile and lavender and steep in hot water for about 10 minutes.

I often add some peppermint and ginger for a tastier brew with even more health benefits.

If you are looking for an easier option, check out my guide with the best lavender teas available in tea bags and loose leaf.

The best part is that while lavender chamomile tea protects your health, it might also give you the best night’s sleep of your life!