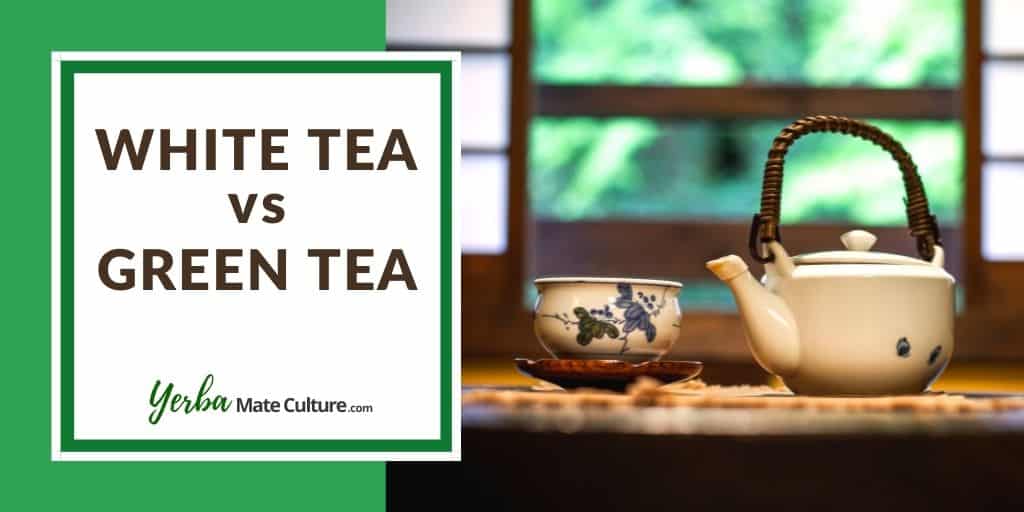 White and green tea are two distinct types of delicious-tasting beverages made from the same plant called Camellia sinensis (tea plant). Both contain antioxidants and other compounds that promote health, as well as caffeine, that increases our energy levels.

But when it comes to comparing white vs green tea, which one takes the prize?

It is a toss-up and may very well depend on your preference in taste and benefits.

In this article, we’ll explore everything you need to know about their differences in growing, harvesting, processing, taste, and benefits. If you’re not sure which one to settle for in the end, just remember both have been consumed for centuries and researched extensively.

Many of us grew up occasionally drinking white and green teas, although the latter seems to be more widely consumed. Yet, it doesn’t mean green is better.

But did you ever thought of their natural ingredients, similarities, differences, or benefits?

I didn’t pay it much attention until I really fell in love with drinking all kinds of teas a few decades ago and started researching the topic.

It turns out that the way the teas are grown, processed, and brewed has a lot to do with the strength, taste, and benefits.

That’s despite both types of teas, along with oolong and black tea, are made from the same plant.

Best white teas are traditionally grown in China in the mountains of Fujian province. More recently their production has spread also in regions such as Taiwan, Thailand, Eastern Nepal, southern Sri Lanka, and Northeast India.

This type of tea got its name from the fine silvery-white hairs of the young, unopened buds rather than the color of the tea when brewed. Famous white teas from Fujian province include the Silver Needle and Bai Mu Dan (White Peony).

Green teas are said to originate in China, particularly in the West Lake region south of Hangzhou. It’s now popularly grown all over the world, including Japan, Taiwan, India, Sri Lanka, Bangladesh, and even the US.

Other differences include how the teas are prepared and processed:

White teas are first withered (but not always) in direct sunlight then allowed to wither further in a carefully controlled indoor environment. This helps with retaining their whitish color.

Green teas on the other hand are traditionally dried in the shade and then either steamed or pan-fried. Processing does not end here. After withering, the leaves are put through a special process to stop oxidation. They are later rolled and dried twice then sorted and packed.

Silver Needle and White Peony are also famous Japanese white teas. Sencha is the most common Japanese green tea while Gyokuro is the highest grade. There are also Tencha and Matcha. Japanese white and green teas are prepared and brewed in a similar manner as the Chinese versions.

An eastern or western brewing technique can be used to brew white and green teas:

The Eastern Technique: Typically a smaller teapot and a larger amount of leaves are used when brewing the eastern way. The brewing vessels vary from Chinese Yixing clay pots and Gaiwans (a lidded bowl without handle) to Japanese cast iron teapots. White teas are steeped in very hot water (194°F/90°C) multiple times for a shorter time (20-30 seconds).

The Western Technique: Involves steeping (instead of boiling) a small amount of tea leaves in a teapot or infuser for about 2-3 minutes. The recommended water temperature is 167°F-185°F (75°C-85°C).

Green teas are steeped in water that is not as hot to protect the flavor and herbal medicinal compounds.

You can drink both types of teas hot or iced and they may also be cold brewed.

Ultimately, the steeping rules and final taste will depend on the type of tea and one’s personal taste preference. For example, the Long Glass brewing method for Silver Needle is meant to produce a well-balanced tea aroma and flavor.

Typical Flavors of White Teas: Although they come from the same plant, white teas have a more delicately sweet, fresh flavor with floral notes.

However, Pai Mu Tan white tea is stronger-tasting than Silver Needle, with its yellow color and fresh hay notes.

Typical Flavors of Green Teas: The flavors of green teas are usually more obvious, ranging from a fresh grassy sweet to a strong earthy, smokey, or toasted flavor. But don’t over brew them or you’ll end up with a bitter-tasting liquid.

Research indicates that there are many health benefits of drinking white and green teas on a long-term basis, thanks to their active ingredients.

These teas are known to help with weight loss, cancer protection, and preventing diabetes. They are also some of the best teas for treating inflammation.

The most notable compounds found in white and green teas are catechins, which are a class of flavonoids. In addition, they contain tannins and caffeine.

Catechins, mainly epigallocatechin-3-gallate (EGCG), are naturally occurring phenols and antioxidants that are beneficial to the body. Antioxidants scavenge free radicals to help prevent cell damage and reduce the risk of certain health conditions.

Both types of teas contain EGCGs but green teas are found to have more catechins per gram. Yet, having significant levels of L-theanine and gamma-aminobutyric acid (GABA) and more antimutagenic (prevents cell mutation) activity gives white teas an advantageous edge.

Potential benefits of green teas include:

Potential benefits of white teas include:

Although mostly similar in terms of benefits, white tea seems to have more polyphenols (antioxidants). This translates to greater anti-inflammatory and cancer-fighting effects. Researchers believe it’s because the tea goes through less processing. Studies are however conflicting.

One great thing is that white tea doesn’t stain your teeth because it’s not acidic and has very low amount of tannins.

So which one takes the crown for having more caffeine?

There is no clear answer to this, although it seems that green tea usually has slightly more caffeine.

However, some white teas also contain plenty of caffeine. This is especially the case when it comes to Silver Needle and White Peony varieties.

The common range for caffeine content of white and green teas range from 14 to 61 mg per 6-8 oz serving.

The caffeine level per cup of tea depends on many factors such as:

What’s Your Tea of Choice?

Choosing between white and green teas may not be as simple as it seems. There’s a difference in their antioxidant and caffeine content as well as final taste due to how they are planted, harvested, processed, and brewed.

But why would you even have to choose one or the other? Go ahead and try different varieties of both to find your personal favorite.

Or consider a blended mix of green and white teas if you’re still weighing your mind. Just be prepared to enjoy their full range of health benefits.

Enjoy your tea, whether it’s green or white!