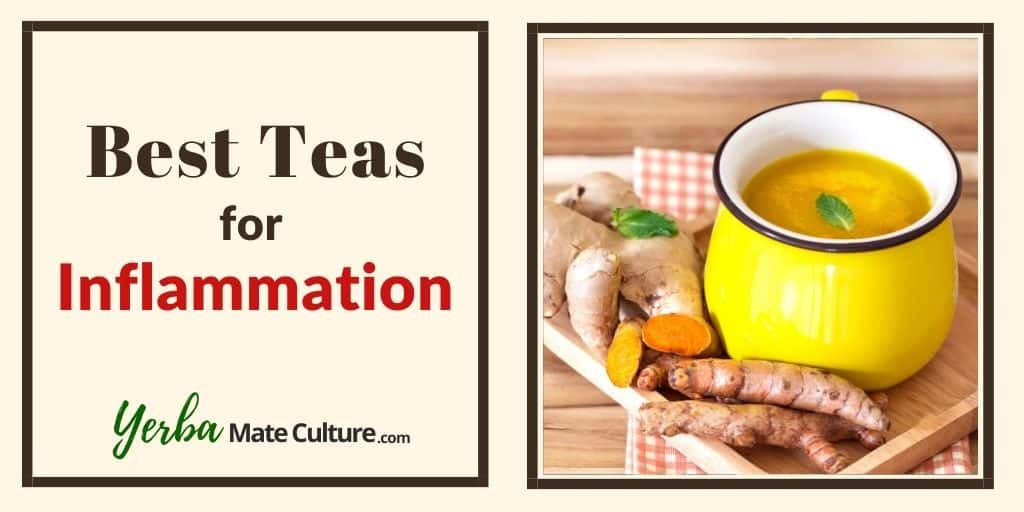 Drinking teas can be a tasty and healthy way to manage inflammation in your body. Scientists have confirmed this in numerous research and clinical trials over the years.

The best part is, you don’t need to wait until you’re sick to take advantage of these natural remedies. “Prevention is better than cure,” as the old saying goes.

Interestingly, you can brew many anti-inflammatory teas from common herbs or natural spices you may have in your kitchen right now. I’m talking about turmeric, green tea, Greek Mountain tea, cinnamon, and the quite zesty root spice called ginger.

Here is a summary of the Best Teas for Inflammation:

Inflammation refers to the process where your immune system responds to a threat to your body. The reaction helps fight off infections caused by bacteria, viruses, fungi, and other harmful pathogens, or heal an injury.

Inflammation is harmless unless the immune system is unable to regulate it. This can lead to autoimmune diseases or illnesses linked to long-term (chronic) inflammation.

Inflammation can be acute (short-term) or chronic (long-term).

Acute Inflammation: Happens when the immune system is attempting to combat harmful invaders such as bacteria and viruses. This immune response usually stops once your body is protected.

Chronic Inflammation: Sometimes the immune system is unable to shut down the inflammation process, which can lead to prolonged inflammation. Experts believe that ongoing inflammation plays a role in a range of chronic diseases.

In other cases, the process is activated when normal body cells or tissue are mistaken as harmful. A common example is seen in people who suffer from allergies. Their immune system reacts to substances in foods or the environment (e.g. pollen) that are harmless to other humans.

Diseases related to chronic inflammation include:

People with these conditions often show higher levels of inflammatory markers in their bodies. A blood test can be used to measure the level of C-reactive protein (CRP) produced by the liver, which is a marker of inflammation.

Acute inflammation is a quick immunity response to protect you from illnesses or minimize the symptoms. The symptoms appear fast and usually last for less than two weeks.

Symptoms of chronic inflammation may include:

Herbal teas and green tea are great natural sources of anti-inflammatory compounds. They can be used to treat both chronic and acute inflammation.

Here are my top 5 teas for treating inflammation. The list is based on my personal experience as well as scientific research.

Turmeric (Curcuma longa L.) is a traditional Indian cooking spice that gives curry powder its vibrant yellow color. Besides cooking, the Indians and Chinese have used it for medicinal purposes for thousands of years.

This root herb contains plenty of curcuminoids. The most active one is curcumin which has powerful anti-inflammatory and antioxidant effects.

Research indicates that when you use turmeric regularly, it can be an effective natural remedy for preventing and treating chronic inflammation diseases.

People with metabolic syndrome and chronic pain may also benefit from adding this spice to their diet. A 2016 study supports turmeric’s ability to treat joint arthritis.

A scientific review carried out on clinical trials found evidence of turmeric’s ability to decrease certain inflammation markers. The studies focuses specificly on the effects of oral turmeric on in people with chronic inflammatory diseases.

Based on research turmeric tea is one of the best natural remedies for inflammation. Curcumin seems to work by suppressing inflammation and blocking the activation of the process that stimulates inflammation.

While it’s a powerful anti-inflammatory compound, curcumin is poorly absorbed into the bloodstream because of its low bioavailability.

Researchers say that about 500–2,000 mg of turmeric per day may be needed for it to be effective. But taking such high doses long-term can lead to harmful side effects.

TIP: Add a pinch of black pepper to your turmeric tea to increase its bioavailability by as much as 2000% and help activate its full anti-inflammatory effects.

I have also put together a buying guide with my favorite turmeric tea brands.

The famous ginger tea is known for its fresh spicy taste, but did you know it’s loaded with anti-inflammatory compounds?

Ginger (Zingiber officinale) is a root spice traditionally used in Indian and other Asian cultures for making tea, cooking, and healing purposes. Despite the strong zesty flavor, ginger has been used in herbal medicine for complaints such as indigestion, nausea, weight loss, menstrual pain, and arthritis.

Gingerol, the main bioactive compound in ginger, has powerful anti-inflammatory and antioxidant effects that help the immune system regulate inflammation.

Gingerol has the ability to reduce oxidative stress which is known to trigger inflammation. That is why ginger has been suggested as a potential therapeutic remedy for osteoarthritis.

A 12-week trial was carried out on patients with knee osteoarthritis. They were divided into two groups and given a ginger powder capsule or placebo (starch-filled capsule) daily. Patients showed a decrease in inflammation markers after the three months of ginger supplementation.

Check out this article with the best ginger teas on the market.

Green tea is perhaps the most popular tea enjoyed by tea lovers around the world.

While many tea fanatics appreciate the strong grassy, earthy flavors, not all of them know green tea has been used for centuries in Traditional Chinese Medicine. Many people use green tea as an effective aid for weight loss, immune support, promoting heart health, and maintaining youthful skin.

Epigallocatechin gallate (EGCG), is an antioxidant found in green tea that helps fight oxidative stress in the immune system and regulate inflammation. EGCG works by suppressing the gene and/or protein and enzymes that play a key role in the inflammation process.

More recently, green tea has been shown to have beneficial effects against inflammatory diseases such as cancer, obesity, diabetes, cardiovascular disease, and neurodegenerative diseases.

Greek mountain tea (also known as Shepherd’s Tea and ironwort) is an herbal infusion that is common in the Mediterranean diet.

It is produced from the dried leaves and flowers of the Sideritis plant that grows in high altitudes in Greece, Turkey, and the Balkan area.

A 2012 study on the species Sideritis scardica found that the plant demonstrates potent anti-inflammatory and gastroprotective abilities. As such, Greek Mountain tea may provide a promising natural remedy for reducing inflammation associated with gastrointestinal disorders.

Shepherd’s Tea usage as a natural health remedy for illnesses such as the common cold, indigestion, aches and pains, respiratory problems, and rheumatic disorders dates back centuries.

Scientists have later confirmed that Sideritis has high levels of antioxidants, polyphenols, sterols, and essential oils, including flavonoids. These are the main beneficial compounds of Sideritis along with its powerful anti-inflammatory agents.

Cinnamon (Cinnamomum Verum) is a brown-colored spice that comes from the bark of several tree species related to the genus Cinnamomun.

The spice gives a pleasant and unmistakable aroma and taste whether you add it to your teas, stews, desserts, or other dishes.

But there’s more to my cinnamon craze than its aromatic scent and flavor.

Cinnamomum Verum has traditionally been used as an herbal medicine in places like China, India, and Sri Lanka for a variety of ailments. They include digestive complaints, toothache, menstrual cramps, colds, flu, and sore throat.

Based on recent studies, the spice may also regulate insulin, lower blood sugar levels, reduce bad cholesterol, cut the risk of heart disease, and protect against Alzheimer’s. These are all medical conditions that have a strong connection to chronic inflammation.

I love cinnamon so much that you’re bound to find the sticks and powder among my spice collection any day of the week!

Summary – How to Avoid and Treat Inflammation

Taking care of our body is the best way to keep our immune system in check.

A healthy immune system reacts in the right way and can handle threats more efficiently. It also makes us less prone to chronic inflammation and the conditions related to it.

Then what are the most important things we can do to prevent and treat inflammation?

You can start with the 5 tips below!

My 5 Best Tips for Avoiding and Treating Inflammation

If you want to try something very powerful, I can recommend that you try my masala haldi doodh (“golden milk”) recipe. It includes 3 of the most powerful anti-inflammatory ingredients I can think of — turmeric, ginger, and cinnamon.

Now it is time to start making some tasty and healthy teas!

The 5 choices included in this guide can help combat inflammation without the side effects of pharmaceutical drugs.

They are also considered safe for human consumption. While severe adverse side effects are rare, care should be taken to avoid overdosage when using herbal teas for inflammation.

Enjoy your tea and stay healthy!