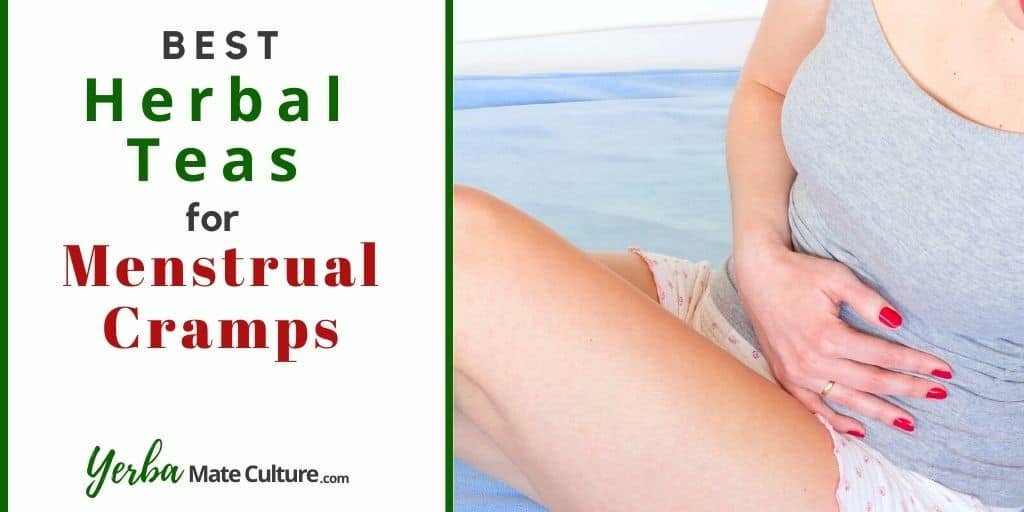 Menstruation can be very painful and I don’t think there’s one single woman who looks forward to the torture of lower abdominal cramps or the discomforting symptoms of Premenstrual Syndrome (PMS). I’m talking about nausea, bloating, headache, irritability, and other symptoms.

Many women take non-steroidal anti-inflammatory drugs (NSAIDs) or other medications for pain relief.

But what if there is a way to alleviate your pain by using herbal teas for menstrual cramps?

Various herbs have been used for centuries in Ayurveda and Chinese Herbal Medicine (CHM) as alternative remedies for menstrual cramps and PMS symptoms. I’m about to spill the tea on how these herbs may be beneficial to you based on scientific evidence.

Here is a summary of the 6 best herbal teas for treating menstrual cramps and PMS:

What Exactly are Menstrual Cramps?

Menstrual cramps (primary dysmenorrhea) are cramping aches and pain in the lower abdomen associated with menstrual periods. The cramps may occur days leading up to or during your periods.

Menstrual cramps are not caused by an underlying condition, such as endometriosis, and tend to lessen or go away with age or after giving birth.

The severity and length of time menstrual cramps last vary from woman to woman.

For some women, the symptoms are severe enough to interfere with daily activities for a few days every month.

Some women also experience other physical and psychological menstrual symptoms including:

The substances trigger painful contractions of the uterine muscles as the uterus tries to expel its lining each month. The higher the levels of prostaglandins, the more severe the pain.

Some women also experience secondary dysmenorrhea or menstrual cramps linked to other conditions such as:

You may be more at risk of menstrual cramps if any of the following applies:

According to Women’s Health Concern, about 8 percent of women experience menstrual pain at some point in their lifetime, starting from early teens all the way to menopause. Around 5 to 10 percent of women have pain that is severe enough to disrupt their life.

You can also try herbals teas brewed from the following common herbs as a natural therapy and an alternative to medication.

Ginger (Zingiber officinale) is widely known as a natural remedy for a range of ailments. It is also an antispasmodic and anti-inflammatory herb that can help relax the muscles and relieve inflammation and pain linked to cramping of the uterine walls during menstruation.

According to research, ginger tea might just be the best herbal tea for treating menstrual cramps.

A study conducted on 2018 tested the effects of consuming ginger tea daily on period discomforts in adolescent girls. The researchers found that ginger reduces menstrual pain and discomfort. This reinforces findings of earlier studies that concluded ginger capsules work to alleviate dysmenorrhea.

The effects of ginger rhizomes on menstrual pain were again tested in another clinical trial. The results suggest that ginger may effectively relieve pain in women with cramping of the lower abdomen (primary dysmenorrhea) if it is taken at the onset or during the 3 days before menstruation.

Overall, ginger is reportedly just as good or better in easing the pain compared to NSAIDs.

If you are going to buy some ginger tea, I recommend you check out this guide with my favorite ginger tea bags and blends.

A refreshing and tasty cup of peppermint tea can also be used to soothe an upset stomach and relieve indigestion. The therapeutic effects come from the medicinal compounds that peppermint (Mentha piperita L.) contains.

The herb is a cross between water mint and spearmint. Menthol, the active ingredient in peppermint, along with other natural compounds is thought to have muscle relaxant and analgesic effects that can benefit women who experience menstrual cramps.

A trial was done to test peppermint capsules in the treatment of primary dysmenorrhea in comparison with mefenamic acid. Mefenamic acid is an NSAID commonly used to treat period pain and decrease blood loss. The women in the trial who took peppermint extract experienced pain relief and their pain was less severe. Peppermint also decreased nausea and diarrhea.

Based on these findings, the researchers recommend mint for treating menstrual cramps and other symptoms, especially since the side effects of herbal medicine are less than medicinal drugs.

The analgesic effects of peppermint also decreased the severity of menstrual cramps in female college-aged students. The women took peppermint capsules from the first to the third day of their menstrual cycle as part of a clinical trial.

You can find the best mint teas in this buyer’s guide.

Or why not grow your own mint with an easy-to-use hydroponic herb garden kit.

Lemon balm (Melissa officinalis) is a lemon-scented herb grown around the world. It comes from the same family as mint and is traditionally used to improve mood and cognitive functions.

The herb has also long been used as a healing remedy for menstrual bleeding.

Given its medicinal profile, researchers tested lemon balm’s effects on symptoms associated with period cramps. The results of one particular study demonstrated that lemon balm decreases the severity of menstrual symptoms such as fatigue, lethargy, and mood changes.

You can grow your own lemon balm in the garden or try Buddha Teas Organic Lemon Balm Tea.

Like me, you probably drink chamomile tea to relax right before sleep.

But did you know that chamomile (Matricaria chamomilla L.) is good for period cramps, pain, and mental distress that accompany menstruation?

In a trial done in Iran, 80 women were asked to drink two cups of chamomile tea a day, 1 week before menstruation and during the first five days of their menstruation cycle. They did this for 3 months.

The women’s pain, anxiety, and distress decreased after one month. As such, chamomile tea is thought to be an effective therapy in relieving the pain and psychological symptoms linked to dysmenorrhea.

The positive effects of chamomile tea on menstrual cramps and psychological symptoms are due to the herb’s antispasmodic, analgesic, and sedative properties. The effects of the compound apigenin in chamomile on dopamine and serotonin in the brain help to minimize anxiety and depressive symptoms experienced by some women.

This is according to one study that also concluded that chamomile extract is just as effective as Mefenamic Acid in relieving pain and regulating emotions related to PMS.

Here is an article that helps you with choosing the best chamomile tea: Best Chamomile Tea Brands and Products

Fennel has traditionally been used to soothe indigestion mainly because of its anti-inflammatory properties and the ability to curb muscle spasms in the digestive tract. This same antispasmodic effect is thought to help relax the muscles in the uterine walls in women who consume fennel tea or fennel extract for menstrual cramps.

The clinical effect of fennel (Foeniculum vulgare) on primary dysmenorrhea was tested on two groups of women. One group was given fennel extract capsules starting 3 days before menstruation. The other group was given medication. Pain relief was more significant in the women who took fennel.

If you are going to buy some fennel tea, Buddha Teas Organic Fennel Seed Tea is my recommendation.

Fenugreek (Trigonella foenum-graecum) is a plant known for its diverse medicinal qualities.

It has traditionally been used in Ayurveda to improve digestion, increase milk production in breastfeeding moms, control muscle spasms, and relieve PMS.

According to a 2014 study, fenugreek and fenugreek seeds are an effective alternative remedy for menstrual cramps and menstrual distress in women and adolescent girls. This is due to the presence of anti-inflammatory, analgesic, and antispasmodic compounds found in the plant and seeds.

In another study, positive results were also seen in women who took 2–3 capsules containing fenugreek seed powder (900 mg) for the first 3 days of menstruation and for two months in a row. Fenugreek reduced both the intensity and length of time the menstrual pain lasted.

PMS symptoms such as fatigue, lethargy, headache, nausea, and vomiting also improved. The researchers compared the results to a second group of women in the study who saw no meaningful improvement in pain and other symptoms after taking medication for the same length of time.

Naturally Soothe Away the Pain of Your Periods

Are you ready to toss the painkillers and sip the best herbal teas for menstrual cramps?

There is evidence supporting the use of peppermint, ginger, fenugreek, fennel, lemon balm, and chamomile tea as a natural decoction for menstrual cramps and PMS symptoms. The herbs are particularly effective when taken before menstruation begins.

The scientific findings do not indicate any serious side effects when using these herbs compared to the side effects of medicinal drugs. While it is generally considered safe to drink herbal teas for menstrual cramps, it might be a good idea to consult your doctor before trying them.

Make Your Own Herbal Blend!

Since all of these 6 herbal teas are already powerful remedies on their own, why not combine some of them?

For example, you can try making tea with ginger, peppermint, and chamomile. And why not add some freshly squeezed lemon juice and a bit of honey.

This herbal blend is not only a great home remedy for menstrual cramps but it also tastes damn delicious!

I hope you found this guide useful and will find a relief from these herbal teas!