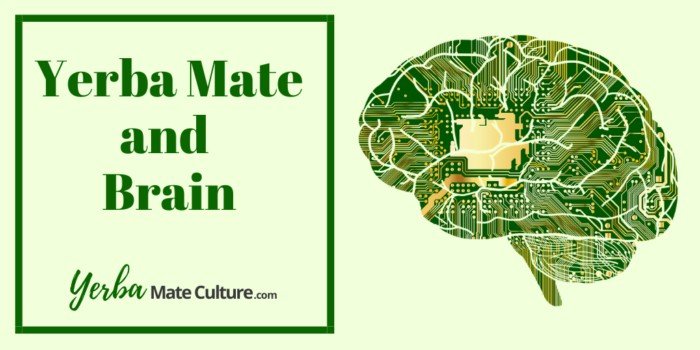 Yerba mate tea is a South American drink known to provide energy and focus along with improved cognitive performance. I like to drink it to increase efficiency at work and to give me energy for sports and physical activities.

In this article, I will explain how yerba mate affects our brain, and what possible neuroprotective effects it can provide.

Yerba mate contains plenty of beneficial compounds such as flavonoids, saponins, vitamins, tannins, and polyphenols. These compounds can help with preventing oxidative damage, regulating energy metabolism, and modulating the expression of antioxidant enzymes.

Yerba mate also provides many other health benefits that you can read more about in this article.

Next, we will take a closer look at the stimulative effects of yerba mate and what is the mechanism behind it.

Yerba mate tea has a reputation as a drink that can improve cognitive function and mental alertness. This is partly achieved by the relatively high caffeine content of mate tea. It is a well-known fact that caffeine makes us feel more awake and alert.

But the energy boost you get from yerba mate is different compared to drinking coffee. The effect lasts longer and gives you a better mental focus. In addition, it doesn’t make you jittery and there is no sudden crash when the effect starts to wear down.

An animal study from 2008 indicates that yerba mate can be useful for improving cognitive performance. This coincides with the traditional use and knowledge related to yerba mate tea. However, more research is needed to confirm these results on humans.

Why is the effect of yerba mate different from coffee, or taking caffeine pills?

The reason behind this is that in addition to caffeine, yerba mate contains two other stimulants, theobromine, and theophylline:

The combination of these three stimulants creates an effect that differs from coffee or other energizing beverages such as energy drinks (except yerba mate energy drinks).

I have noticed that drinking yerba mate tea makes me more efficient in many tasks.

It is useful as a pre-workout drink because it helps me with performing a physical exercise with a higher intensity and focus for a longer period of time. I also feel that it allows me to be more efficient when working with tasks that require reasoning and creative thinking.

Can Yerba Mate Protect Our Brain?

Many scientists agree on the theory that oxidative stress is one of the main causes of aging. Oxidative stress occurs when there is an imbalance between free radicals and antioxidants in the tissue.

Yerba mate contains several powerful antioxidants that can be useful for protecting our brains from oxidative damage.

Chlorogenic acid (CGA) is polyphenol that can provide us with many health benefits. It is commercially available as 5-caffeoylquinic acid (5-CQA) which has the ability to reach our brain by crossing the blood-brain barrier. It is also one of the most important beneficial compounds found in yerba mate.

CGA has several antioxidant properties including neuroprotective, cardioprotective, and antitumor effects. One of the main benefits that CGA provides for our central nervous system, is its ability to prevent the formation of chemically-induced reactive oxygen species (ROS).

In a 2017 study published in the Journal of Functional Foods synaptosomal/mitochondrial fractions of rat brain were incubated in yerba mate extract or CGA solution. CGA was administered at an equal molar base compared to the CGA contained in the yerba mate extract.

The brain fractions were then exposed to oxidative damage through ROS formation by FeSO4 and mitochondrial dysfunction through inhibition of succinate dehydrogenase by 3-NP.

The study noted that yerba mate had the following effects:

These results indicate that yerba mate can be useful with protecting our brain from oxidative damage and the associated neurodegenerative diseases (e.g. Parkinson’s disease, Alzheimer’s disease,) caused by aging, diseases, and harmful chemicals and other toxins.

Epilepsy is one of the most common neurological disorders as it affects more than 50 million people in the world. It is a consequence of abnormal brain activity and includes symptoms such as spontaneous and recurring seizures, along with periods of unusual behavior and sensations.

The seizures also cause oxidative damage to neurons and thus increase the exposure to neurodegenerative disorders.

The main problem with antiepileptic drugs is that they are not effective for about 30-40% of individuals.

A study published in Brain Research Bulletin in 2013 tested the possible anticonvulsive and neuroprotective effects of organic and conventional yerba mate with rats. 42 rats were divided into 3 groups: one group was served conventional yerba mate, while the other group ingested organic yerba mate, and the control group had distilled water. Yerba mate (or water) was consumed once per day for a period of 15 days. Half of the rats in each group then received a single intraperitoneal dose of pentylenetetrazol (PTZ) to induce epileptic seizures.

The behavior of the rats was monitored for 30 minutes after the PTZ dose, after which their brains were stored and examined.

The rats that had been ingesting organic yerba mate had decreased time of seizures.

Both yerba mate infusions reduced the frequency of the seizures and also shoved some decrease in the intensity of the seizures. In addition, they significantly prevented oxidative damage in the brain.

As explained in this article, yerba mate can give you a nice energy boost with increased focus and cognitive function. On the other hand, we are all individuals, and experience its effect in different ways.

Also, each brand of yerba mate can contain different amounts of active compounds depending on the applied cultivation and processing methods.

The best way to find out how yerba mate affects you is to try it yourself.

You can also try various products and brewing methods to find the one that you like most. You can read my article reviewing 5 different yerba mate brands to find a nice product to try.

So far, no research related to the neuroprotective capabilities of yerba mate has been conducted on humans. We can not be sure how effective it can be, but the research that was introduced earlier shows promise in this area. One thing is sure: I will continue to drink my yerba mate tea and enjoy the positive and energizing effects that it provides!

I hope that you found this article useful and interesting. Please post your comments and questions below.